NASA's Close-Up Look at a Hurricane's Eye Reveals a New 'Fuel' Source
In the eye of a furious hurricane, the weather is often quite calm and sunny. But new NASA research is providing clues about how the seemingly subtle movement of air within and around this region provides energy to keep this central "powerhouse" functioning. 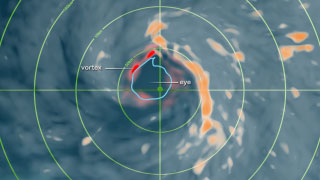 Image right: In the eye of a furious hurricane, the weather is often quite calm and sunny. But new NASA research is providing clues about how the seemingly subtle movement of air within and around this region provides energy to keep this central "powerhouse" functioning. For the first time, research meteorologists have run complex simulations of an intensifying hurricane using a very fine temporal resolution of 3 minutes. The following movie combines this simulation data with observational data from space and descriptive illustrations to show how a hurricane intensifies.
+ Click this link to view animation. + Click to download video Credit: NASA GSFC Scientific Visualization Studio

Using computer simulations and observations of 1998's Hurricane Bonnie in southern North Carolina, scientists were able to get a detailed view of pockets of swirling, warm humid air moving from the eye of the storm to the ring of strong thunderstorms in the eyewall that contributed to the intensification of the hurricane.

The findings suggest that the flow of air parcels between the eye and eye wall - largely believed trivial in the past - is a key element in hurricane intensity and that there's more to consider than just the classic "in-up-and-out" flow pattern. The classic pattern says as air parcels flow "in" to the hurricane's circulation, they rise "up," form precipitating clouds and transport warm air to the upper atmosphere before moving "out" into surrounding environmental air. 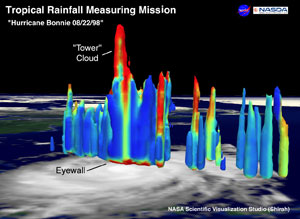 "Our results improve understanding of the mechanisms that play significant roles in hurricane intensity," said Scott Braun, research meteorologist at NASA's Goddard Space Flight Center, Greenbelt, Md. "The spinning flow of air parcels - or vortices - in the eye can carry very warm, moist eye air into the eyewall that acts as a turbocharger for the hurricane heat engine." The research appears in the June 2007 issue of the American Meteorological Society's Journal of the Atmospheric Sciences.

"While the 'in-up-and out' pattern has been the prevailing paradigm for the past five decades, when you closely examine intense hurricanes it's apparent that a second family of moist air parcels often travels from the border of the eyewall to the eye, where it picks up moisture from the ocean surface," said co-author Michael Montgomery, professor of meteorology at the U.S. Naval Postgraduate School, Monterey, Calif. "These moisture-enriched air parcels then rather quickly return to the main eyewall and collectively raise the heat content of the lower eyewall cloud, similar to increasing the octane level in auto fuel."

The researchers analyzed thousands of virtual particles to track the movement of air between the eye and eyewall, and between the eyewall and its outside environment. To uncover the impact of these particles on storm intensity, they used a simulation of Hurricane Bonnie from a sophisticated computer model and data gathered during the NASA Convection and Moisture Experiment (CAMEX). 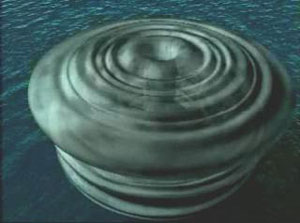 Image right: Using TRMM data, the combustion process in the hurricane engine is displayed in this animation, showing how it is related to storm intensification or weakening. Click to view animation Credit: NASA GSFC Conceptual Imaging Lab

The simulation has also helped to explain the formation of deep “hot towers” observed in Bonnie and many other hurricanes by NASA’s Tropical Rainfall Measuring Mission (TRMM) satellite. TRMM carries the first and only space-based precipitation radar that allows researchers to peer through clouds and get a 3-D view of storm structure. It captured a particularly deep hot tower in Bonnie as the storm intensified several days before striking North Carolina.

Hot towers are deep, thick clouds that reach to the top of the troposphere, the lowest layer of the atmosphere, usually about ten miles high in the tropics. The updrafts within these "towers" act like express elevators, accelerating the movement of energy that boosts hurricane strength, and are called “hot” because of the large amount of latent heat they release as water vapor is condensed into cloud droplets. Deep hot towers in the eyewall are usually associated with a strengthening storm.

In previous research, Braun, Montgomery, and Zhaoxia Pu of the University of Utah, Salt Lake City, found a direct relationship between these deep hot towers and the intense vortices inside the eye. "The vortices were shown to be especially crucial in providing the focus and lift needed for hot tower formation and add insight into when and where hot towers will develop in storms," said Braun. The study was published in the January 2006 CAMEX special issue of the Journal of the Atmospheric Sciences.

Vortices are created in response to the rapid change in wind speed from the fierce eyewall to the calm eye. Near the surface, air spiraling inward collides with these vortices to force air up, forming updrafts. Strong updrafts in the eyewall carry moisture much higher than normal and help create hot towers.

The current study suggests that in addition to providing lift, these vortices also feed high energy air from the low-level eye into the eyewall, boosting the strength of the updrafts. This transfer of energy allows the storm to remain stronger than expected, particularly when encountering weakening influences, including cooler ocean water temperatures and wind shear, the change in the direction and speed of winds with altitude.

“This discovery may help explain why strong storms can remain intense for several hours or longer after encountering conditions that usually bring weakening," said Montgomery. "Ongoing research will add to our understanding of the dynamics associated with storm intensity so that we can pinpoint the variables and processes that must be represented in numerical models to improve intensity forecasts."

When hurricane Bonnie finally began to lose strength a couple days before landfall, a significant amount of air in the eyewall was traced back - not to the eye - but to the middle levels of the atmosphere away from the storm. This inflow was caused by wind shear and brought much cooler, drier environmental air into Bonnie’s circulation, acting like an anti-fuel to reduce energy in the storm and weaken its strong winds.

Despite these and other recent advances in understanding the internal workings of hurricanes, forecasting their intensity is still a significant challenge.

"Most of today's computer models that aid forecasters cannot sufficiently account for the extremely complex processes within hurricanes, and model performance is strongly dependent on the information they are given on the structure of a storm," said Braun. "We also typically only see small parts of a storm at a given time. That is why it is important to combine data from field experiments such as CAMEX with data from TRMM and other satellites. As observing technologies and models improve, so too will forecasts."