NASA Sends Deep Impact Spacecraft on Mission to Comet Hartley 2
NASA has approved the retargeting of the EPOXI mission for a flyby of comet Hartley 2 on Oct. 11, 2010. Hartley 2 was chosen as EPOXI's destination after the initial target, comet Boethin, could not be found. Scientists theorize comet Boethin may have broken up into pieces too small for detection. 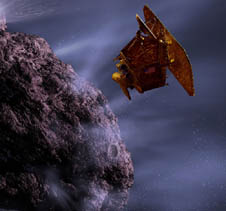 Image right: This is an artist's concept of the Deep Impact spacecraft flying past a comet. Credit: NASA/JPL/UMD/Pat Rawlings Print-resolution copy

In addition to investigating comet Hartley 2, the spacecraft will point the larger of its two telescopes at nearby exosolar planetary systems in late January 2008 to observe several previously discovered planetary systems outside our solar system. It will study the physical properties of giant planets and search for rings, moons and planets as small as three Earth masses. It also will look at Earth as though it were an exosolar planet to provide data that could become the standard for characterizing these types of planets.

"The search for exosolar planetary systems is one of the most intriguing explorations of our time," said Drake Deming, EPOXI deputy principal investigator at NASA's Goddard Space Flight Center, Greenbelt, Md. "With EPOXI we have the potential to discover new worlds and even analyze the light they emit to perhaps discover what atmospheres they possess."

The mission's closest approach to the small half-mile-wide comet will be about 620 miles. The spacecraft will employ the same suite of two science instruments the Deep Impact spacecraft used during its prime mission to guide an impactor into comet Tempel 1 in July 2005. Deep Impact does not have another impactor, so Hartley 2 will not get hit, but the close-up view will allow the spacecraft's two telescopes to closely observe surface features of the comet while its infrared spectrometer maps the composition of any outbursts of gas from the surface.

If EPOXI's observations of Hartley 2 show it is similar to one of the other comets that have been observed, this new class of comets will be defined for the first time. If the comet displays different characteristics, it would deepen the mystery of cometary diversity.

"When comet Boethin could not be located, we went to our backup, which is every bit as interesting but about two years farther down the road," said Tom Duxbury, EPOXI project manager at NASA's Jet Propulsion Laboratory in Pasadena, Calif.

Mission controllers at JPL began directing EPOXI towards Hartley 2 on Nov. 1. They commanded the spacecraft to perform a three-minute rocket burn that changed the spacecraft's velocity. EPOXI's new trajectory sets the stage for three Earth flybys, the first of which occurred on Dec. 31, 2007. This places the spacecraft into an orbital "holding pattern" until time for the optimal encounter of comet Hartley 2 in 2010.

"Hartley 2 is scientifically just as interesting as comet Boethin because both have relatively small, active nuclei," said Michael A'Hearn, principal investigator for EPOXI at the University of Maryland, College Park.