Deep Impact Extended Mission Could Probe Deeper Into Solar System Origin
In July, 2005, the Deep Impact spacecraft released a probe that blasted a crater in comet Tempel 1, spilling its elements into space so scientists could discover its composition. The assault was justified because comets are thought to be leftovers from the formation of our solar system, so learning more about them helps to understand how our solar system came to be.

Since those fireworks, the spacecraft has cruised silently through space, healthy and able to take on another mission, if needed. The Deep Impact team realized that with the spacecraft already built and launched, extra discoveries could be made at very little cost, a bonus for an already successful mission.

The team put together a proposal to use the spacecraft's telescope to observe the atmospheres of alien worlds, and to visit another comet. The proposed extended mission is called EPOXI (Extrasolar Planet Observation and Deep Impact Extended Investigation), and it has received $500,000 from NASA for an initial study to determine the requirements and costs in greater detail. 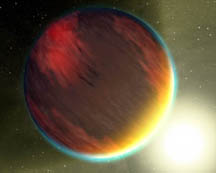 If approved, as Deep Impact passes by Earth on December 31, 2007, it will use our planet's gravity to direct itself to comet Boethin. While it cruises toward the comet, the first part of the extended mission -- the investigation of alien worlds --would begin in January, 2008. More than 200 alien (extrasolar) planets have been discovered to date. Most of these are detected indirectly, by the gravitational pull they exert on their parent star. Directly observing extrasolar planets is very difficult, because the star is so brilliant compared to the planet. Planets simply get lost in the glare, like fireflies near a headlight.

However, sometimes by chance the orbit of an extrasolar planet is aligned so that it eclipses its star as seen from Earth. In these rare cases, light from the extrasolar world can be seen directly. "When the planet appears next to its star, your telescope captures their combined light. When the planet passes behind its star, your telescope only sees light from the star. By subtracting light from just the star from the combined light, you are left with light from the planet. We can analyze this light to discover what the atmospheres of these planets are like," said Drake Deming of NASA's Goddard Space Flight Center, Greenbelt, Md., Deputy Principal Investigator for EPOXI. 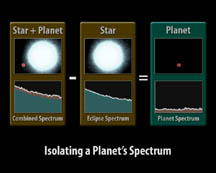 Image left: This diagram illustrates how astronomers can capture the elusive spectra of hot-Jupiter planets. Spectra are an object's light spread apart into its basic components, or wavelengths. By dissecting light in this way, scientists can sort through it and uncover clues about the composition of the object giving off the light. To capture a spectrum of the planet, the telescope must observe the system twice. It takes a spectrum of the star together with the planet (first panel), then, as the planet disappears from view, a spectrum of just the star (second panel). By subtracting the star's spectrum from the combined spectrum of the star plus the planet, it is able to get the spectrum for just the planet (third panel). Print-resolution copy Credit: NASA/JPL-Caltech

Deep Impact will observe three nearby stars with "transiting extrasolar planets," so named because the planet transits, or passes in front of, its star. The planets were discovered earlier and are giant planets with massive atmospheres, like Jupiter in our solar system. They orbit their stars much closer than Earth does the sun, so they are hot and belong to the class of extrasolar planets nicknamed "Hot Jupiters".

These giant planets may not be alone. If there are other worlds around these stars, they might also transit the star and be discovered by the spacecraft. Even if they don't transit, Deep Impact could find them indirectly. Their gravity will pull on the transit planets, altering their orbits and the timing of their transits. "Since Deep Impact will be able to stare at these stars for long periods, we can observe multiple transits and compare the timing to see if there are any hidden worlds," said Deming.

"The comet hit by Deep Impact's probe, Tempel 1, was unusual compared to other comets we have seen up close," said Michael A'Hearn of the University of Maryland, College Park, Principal Investigator for EPOXI. For example, it appears that several pieces may have come together to build up the comet's nucleus, the lump of ice and dust that comprises the solid part of a comet. Second, comets vent gases as they come closer to the sun and warm up. Tempel 1 did this as well, but in an unusual way. Water vapor vents appeared all over the nucleus, as expected, but carbon dioxide only vented from certain parts. Also, since comets are a mixture of dust and ice, scientists expected dust to be dragged out from any gas vent, but dust only came from the carbon dioxide vents. Third, there are some very smooth areas on the nucleus, as if something had flowed there. However, the comet's gravity is extremely weak, so scientists don't understand how any material could be pulled down to flow across the surface. Finally, there are circular areas with raised rims that resemble impact craters. However, craters haven't been seen on any other visited comets so far. Scientists are surprised to see them on Tempel 1 because it's hard to understand how craters would last, since the surface gets vaporized every time the comet's orbit takes it close to the sun. 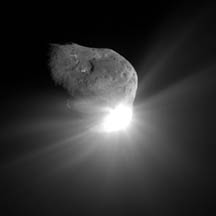 Image right: This spectacular image of comet Tempel 1 was taken 67 seconds after it obliterated Deep Impact's impactor spacecraft. The image was taken by the high-resolution camera on the mission's flyby craft. Scattered light from the collision saturated the camera's detector, creating the bright splash seen here. Linear spokes of light radiate away from the impact site, while reflected sunlight illuminates most of the comet surface. The image reveals topographic features, including ridges, scalloped edges and possibly impact craters formed long ago. Credit: NASA/JPL-Caltech/UMD

"We want a close look at Boethin to see if the surprises of Tempel 1 are more common than we thought, or if Tempel 1 really is unusual," said A'Hearn.

Deep Impact does not have another probe, so Boethin will not get hit, but the close-up view will allow the spacecraft's infrared spectrometer to make a map of the comet's surface composition, while the telescope observes surface features.

"It's exciting that we were able to combine two totally independent science investigations into a single project. However, both relate to understanding how solar systems form and evolve," said A'Hearn.

According to the team, comets and their asteroid kin are the leftover building blocks of planets, and might have contributed water and organic material to the ancient Earth, aiding the start of life. By observing extrasolar planets, scientists can compare them to our own and discover what we have in common, what we don't, and perhaps why.

Elements of the EPOXI mission were among approximately two dozen proposals submitted in response to NASA's Discovery Program 2006 Announcement of Opportunity last April. NASA selected three proposed new Discovery-class missions, and three "mission of opportunity" proposals that would make use of existing NASA spacecraft, for concept development funding. Two of the three existing spacecraft proposals used the Deep Impact spacecraft, and were later combined into the EPOXI proposal. NASA may select one or more investigations to continue into a development effort after detailed review of the concept studies. Decisions about which mission concepts will proceed to development are expected in late 2007. If selected, the EPOXI project will be managed by NASA's Jet Propulsion Laboratory in Pasadena, Calif.