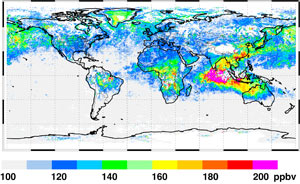 Scientists using NASA satellite and rainfall data have linked the recent El Nino to the greatest rise in wildfire activity in Indonesia since the record-breaking 1997-98 El Nino.

Image right: The large plume of pollution from Indonesian fires in November 2006 is clearly visible in this global average map of atmospheric carbon monoxide as measured by the Measurements of Pollution in the Troposphere (MOPITT) instrument. High levels of carbon monoxide pollution are shown in pink; lower levels in blue. Credit: NCAR/University of Toronto

As rainfall sharply decreased during the last quarter of 2006 across the dense tropical rainforests of Sumatra, Kalimantan, and Malaysia, the land became exceptionally dry. This allowed wildfires to quickly spread, releasing large amounts of soot and tiny dust particles called aerosols that brought unhealthy pollution levels to the area. 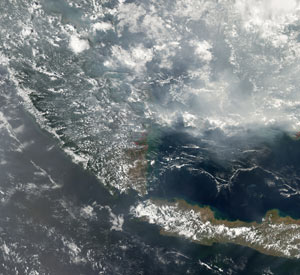 The Measurements of Pollution in the Troposphere (MOPITT) instrument aboard NASA's Terra satellite tracked the wildfire pollution plumes as they spread from the Indonesian islands into the Indian Ocean from September through November 2006, and measured the associated increases in atmospheric carbon monoxide levels.

"Droughts over Indonesia are often brought on by a shift in the atmospheric circulation over the tropical Pacific associated with El Nino conditions," said David Edwards, MOPITT project leader at the National Center for Atmospheric Research, Boulder, Colo. "Although the current El Nino is rather weak compared to that of 1997-98, we have found dramatic increases in wildfire activity and corresponding pollution."

Using MOPITT, Edwards and his team noted a distinct spike in carbon monoxide levels across much of the Southern Hemisphere from the large number of Indonesian fires at the end of 2006, greater than that associated with any El Nino event since 1997-98. The recent increase in wildfires was also captured by another instrument, the Moderate Resolution Imaging Spectroradiometer, on NASA's Terra and Aqua satellites, while NASA's Global Precipitation Climatology Project confirmed a decline in Indonesian rainfall during the period.

Despite the number of factors that influence air quality across the region, wildfires play a very significant role. "Even though fires in South America and southern Africa typically produce the greatest amount of carbon monoxide, the pollution from Indonesian fires is likely responsible for most of the year-to-year variation in pollution levels throughout the Southern Hemisphere," Edwards said. Carbon monoxide is also involved in raising the concentration of ground-level "bad" ozone. 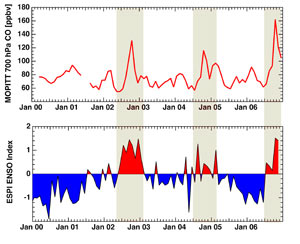 Image right: Peaks of Indonesian carbon monoxide pollution (top) coincide with the warm phases of El Nino (bottom) over the past seven years. The inter-annual variability of atmospheric carbon monoxide at an altitude of about 3 kilometers (1.9 miles) was measured by the Measurements of Pollution in the Troposphere (MOPITT) instrument. The El Nino warm phase conditions led to a reduction in rainfall and an increase in fire occurrence over Indonesia (red). Credit: NASA/NCAR/University of Toronto

Some burning takes place every year in Indonesia, but the number and intensity of fires depends largely on rainfall and soil moisture conditions during the fire season, which usually runs September through November. Regional forest clearing practices also heighten the risk for wildfire development and spread. As lands are cleared, peat deposits - thick layers of partially decayed vegetation matter - build up. These deposits are vulnerable to wildfire and once ignited often result in a smoldering burn that releases copious amounts of smoke and carbon into the atmosphere until monsoon rains begin, typically in December.

"MOPITT is an especially valuable tool because it monitors carbon monoxide, a good indicator of pollution from combustion that remains in the atmosphere for several weeks, often traveling vast distances," said Edwards. "Fires also produce large relative changes in atmospheric carbon monoxide levels that are detected quite well by satellites, so that we can easily assess the impact of fires on air quality and pollution levels."

Carbon monoxide released from wildfires is a major player in regional air quality conditions, but significant amounts of carbon dioxide - the primary greenhouse gas - are also released. As a result, wildfires also have the potential to impact long-term climate.

The scientists are currently studying how they can use satellite data to examine Northern Hemisphere wildfire outbreaks and corresponding pollution increases due to periodic changes in weather patterns.