The new division, to be housed in Goddard's Beyond Einstein Program Office, will facilitate NASA's future medium-class science missions to investigate these profound cosmic mysteries.

The Beyond Einstein Program consists of five proposed missions: two major observatories and three smaller probes. Technology development already is under way on the proposed observatories. The Laser Interferometer Space Antenna (LISA) would orbit the sun and measure gravitational waves in our galaxy and beyond. Constellation-X would peer at matter falling into supermassive black holes. 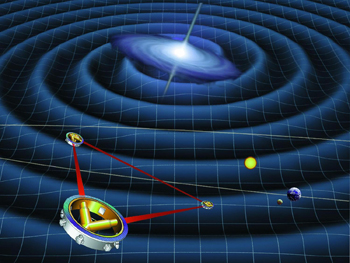 Image right: LISA is one project under study by the Einstein Probes Office. To study gravitational waves, LISA would “float” over them, much like a buoy on choppy seas. Image credit: NASA

The planned probes would investigate the nature of dark energy, the physics of the Big Bang, and the distribution and types of black holes in the universe. NASA previously has supported initial mission concept studies for the Dark Energy, Inflation, and Black Hole Finder probes.

NASA and the U.S. Department of Energy have commissioned a National Research Council committee to assess which of the Beyond Einstein missions should be developed and launched first. The assessment will be based on scientific impact, technology readiness and budgetary considerations. The committee's recommendations are due to be released in September 2007.

"We look forward to receiving the recommendations of the committee," said Jon Morse, director of the Astrophysics Division in NASA's Science Mission Directorate, Washington. "Adding this new office to the existing logistical support for the Beyond Einstein Program will help us react swiftly to the committee's assessment."

The Beyond Einstein Program is designed to provide key information to help answer fundamental questions about the origin and evolution of the universe. The Beyond Einstein spacecraft will build on such current NASA missions as the Hubble Space Telescope, the Chandra X-ray Observatory, and the Wilkinson Microwave Anisotropy Probe.