NASA's Swift Sees Double Supernova in Galaxy
In just the past six weeks, two supernovae have flared up in an obscure galaxy in the constellation Hercules. Never before have astronomers observed two of these powerful stellar explosions occurring in the same galaxy so close together in time. 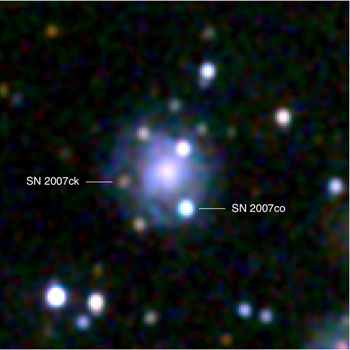 Image right: Supernova 2007ck (left) is a Type II event, and Supernova 2007co (right) is a Type Ia event. The image is a combination of red, green, and blue pictures taken on June 9 and 12 by the Ultraviolet/Optical Telescope on NASA’s Swift satellite, which was designed primarily to study another type of stellar explosion – gamma ray bursts. Click image to enlarge. Credit: Stefan Immler NASA/GSFC, Swift Science Team.

The galaxy, known as MCG +05-43-16, is 380 million light-years from Earth. Until this year, astronomers had never sighted a supernova popping off in this stellar congregation. A supernova is an extremely energetic and life-ending explosion of a star.

Making the event even more unusual is the fact that the two supernovae belong to different types. Supernova 2007ck is a Type II event – which is triggered when the core of a massive star runs out of nuclear fuel and collapses gravitationally, producing a shock wave that blows the star to smithereens. Supernova 2007ck was first observed on May 19.

In contrast, Supernova 2007co is a Type Ia event, which occurs when a white dwarf star accretes so much material from a binary companion star that it blows up like a giant thermonuclear bomb. It was discovered on June 4, 2007. A white dwarf is the exposed core of a star after it has ejected its atmosphere; it’s approximately the size of Earth but with the mass of our Sun.

"Most galaxies have a supernova every 25 to 100 years, so it’s remarkable to have a galaxy with two supernovae discovered just 16 days apart," says Stefan Immler of NASA’s Goddard Space Flight Center. In 2006 Immler used NASA’s Swift satellite to image two supernovae in the elliptical galaxy NGC 1316, but both of those explosions were Type Ia events, and they were discovered six months apart.

The simultaneous appearance of two supernovae in one galaxy is an extremely rare occurrence, but it’s merely a coincidence and does not imply anything unusual about MCG +05-43-16. Because the two supernovae are tens of thousands of light-years from each other, and because light travels at a finite speed, astronomers in the galaxy itself, or in a different galaxy, might record the two supernovae exploding thousands of years apart.