Suzaku Explains Cosmic Powerhouses
By working in synergy with a ground-based telescope array, the joint Japanese Aerospace Exploration Agency (JAXA)/NASA Suzaku X-ray observatory is shedding new light on some of the most energetic objects in our galaxy, but objects that remain shrouded in mystery. 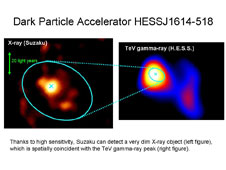 Image right: Suzaku resolved an X-ray source (left) that was also seen in gamma rays by the H.E.S.S. array (right). The object, HESS J1614-518, is accelerating protons to nearly the speed of light. Click on image to enlarge. Credit: JAXA/H.E.S.S.

These cosmic powerhouses pour out vast amounts of energy, and they accelerate particles to almost the speed of light. But very little is known about these sources because they were discovered only recently. "Understanding these objects is one of the most intriguing problems in astrophysics," says Takayasu Anada of the Institute for Space and Astronautical Science in Kanagawa, Japan. Anada is lead author of a paper presented last week at a Suzaku science conference in San Diego, Calif.

These mysterious objects have been discovered in just the last few years by an array of four European-built telescopes named the High Energy Stereoscopic System (H.E.S.S.), located in the African nation of Namibia. H.E.S.S. indirectly detects very-high-energy gamma rays from outer space. These gamma rays are the highest-energy form of light ever detected from beyond Earth, so H.E.S.S. and other similar arrays have opened up a new branch of astronomy.

The gamma rays themselves are absorbed by gases high up in Earth’s atmosphere. But as the gamma rays interact with air molecules, they produce subatomic particles that radiate a blue-colored light known as Cherenkov radiation. H.E.S.S. detects this blue light, whose intensity and direction reveals the energy and position of the gamma-ray source. 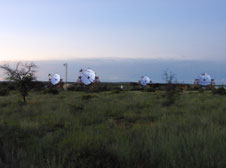 The H.E.S.S. observations were groundbreaking, but the array’s images aren’t sharp enough to reveal the exact location where particles are being accelerated or how the particles are being accelerated. To solve this problem, several teams aimed Suzaku in the direction of some of these H.E.S.S. sources. Any object capable of emitting high-energy gamma rays will also produce X-rays, and Suzaku is particularly sensitive to high-energy (hard) X-rays.

When Anada and his colleagues pointed Suzaku at a source known as HESS J1837-069 (the numerals express the object’s sky coordinates), the X-ray spectrum closely resembled X-ray spectra of pulsar wind nebulae — gaseous clouds that are sculpted by winds blown off by collapsed stars known as pulsars. Pulsar wind nebulae emit hard X-rays, and their X-ray output remains relatively constant over long timescales. "The origin of the gamma-ray emission from HESS J1837-069 remains unclear, but we suspect that this source is a pulsar wind nebula from the Suzaku observation," says Anada. 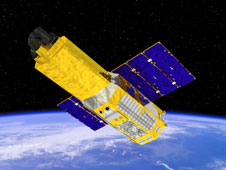 Another group, led by Hironori Matsumoto of the University of Kyoto in Japan, targeted Suzaku on HESS J1614-518. This source belongs to a class of objects known as "dark particle accelerators" because their ultrahigh energies suggest they are accelerating particles to near-light speed, turning them into cosmic rays. But what are these objects, and what kinds of particles are being accelerated?

Although the nature of these objects remains a mystery, Suzaku’s observations do reveal the identity of the particles. When electrons are accelerated to high speeds, they spiral around magnetic field lines that permeate space, generating copious X-rays. But since protons are 2,000 times more massive than electrons, they emit few X-rays. Matsumoto and his colleagues reported at the conference that HESS J1614-518 is a very weak X-ray emitter. "This result strongly suggests that high-energy protons are being produced in this object," says Matsumoto.

Suzaku also observed two other H.E.S.S. dark particle accelerators, but found no obvious X-ray counterparts at the H.E.S.S. positions. These sources must also be weak X-ray emitters, indicating they are accelerating mostly protons. As Matsumoto says, "Using the high sensitivity of the Suzaku satellite, we can find strong candidates for the origin of cosmic rays."

Launched in 2005, Suzaku is the fifth in a series of Japanese satellites devoted to studying celestial X-ray sources. Managed by JAXA, this mission is a collaborative effort between Japanese universities and institutions and NASA Goddard.