NASA Scientists Detect Spectrum of Planets Orbiting Other Stars
For the first time, scientists at Goddard have obtained a spectrum, or molecular fingerprint, of a planet orbiting another star. Using spectroscopy, scientists were able to identify silicon dust in clouds on a gas-giant planet called HD 209458b. That planet is located 150 light years from Earth. 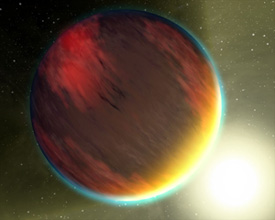 Image right: This artist's concept shows a cloudy Jupiter-like planet that orbits very close to its fiery hot star. NASA's Spitzer Space Telescope was recently used to capture spectra, or molecular fingerprints, of two "hot Jupiter" worlds like the one depicted here. This is the first time a spectrum has ever been obtained for an exoplanet, or a planet beyond our solar system. + High resolution image Click image to view animation (3.3 Mb - no audio) Image credit: NASA/JPL-Caltech

One way in which scientists can study the properties of extrasolar planets is using spectroscopy, which refers to spreading light into its different colors (similar to a prism). For these observations, the team used NASA’s Spitzer Space Telescope, which operates in the infrared.

Richardson and his co-authors found that the extrasolar planet's spectrum revealed the "signature" of silicate (an element found on Earth) dust in clouds high in the planet's atmosphere.

Although the scientists saw "spectral signatures" or identifiers that were related to clouds, they were surprised that they didn't see any signatures that showed there was water vapor. On Earth, clouds are composed primarily of water vapor.

Richardson said that planets similar to this one, often called "hot Jupiter" type planets because they are gaseous like Jupiter but very close to their parent stars (even closer than Mercury is to the sun), must contain water vapor.

"Since oxygen and hydrogen are such abundant molecules in the cosmos it is virtually impossible for water (as vapor, or steam) to be absent from the planet, Richardson said. “So. the water vapor must be hidden, probably by the same cloud layer that we detect in the spectrum."

Once more powerful infrared telescopes like the James Webb Space Telescope, slated for launch in 2013, are launched, and as smaller planets are detected, this technique may hold promise for detecting the signatures of life on hot Earth-like planets.