Four years of observations from the European Space Agency’s Integral (INTErnational Gamma-Ray Astrophysics Laboratory) satellite may have cleared up one of the most vexing mysteries in our Milky Way: the origin of a giant cloud of antimatter surrounding the galactic center. 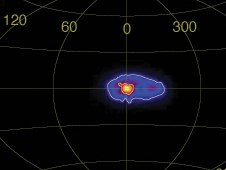 Image right: Integral mapped the glow of 511 keV gamma rays from electron-positron annihilation. The map shows the whole sky, with the galactic center in the middle. The emission extends to the right. Click image for enlargement. Credit: ESA/Integral/MPE/G. Weidenspointner

As reported by an international team in the January 10 issue of Nature, Integral found that the cloud extends farther on the western side of the galactic center than it does on the eastern side. This imbalance matches the distribution of a population of binary star systems that contain black holes or neutron stars, strongly suggesting that these binaries are churning out at least half of the antimatter, and perhaps all of it.

"The reported Integral detection of an asymmetry represents a significant step forward toward a solution of one of the major outstanding problems in high-energy astrophysics. I think I can hear a collective sigh of relief emanating from the community," says Marvin Leventhal, a University of Maryland professor emeritus and a pioneer in this field.

The cloud itself is roughly 10,000 light-years across, and generates the energy of about 10,000 Suns. The cloud shines brightly in gamma rays due to a reaction governed by Einstein’s famous equation E=mc^2. Negatively charged subatomic particles known as electrons collide with their antimatter counterparts, positively charged positrons. When electrons and positrons meet, they can annihilate one another and convert all of their mass into gamma rays with energies of 511,000 electron-volts (511 keV). 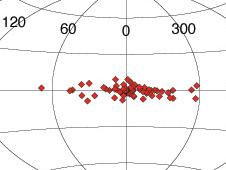 Image right: This Integral image shows the distribution of hard low-mass X-ray binaries. This stellar population has a distribution that matches the extent of the 511 keV map. Click image for enlargement. Credit: ESA/Integral/MPE/G. Weidenspointner

The antimatter cloud was discovered in the 1970s by gamma-ray detectors flown on balloons. Scientists have proposed a wide range of explanations for the origin of the antimatter, which is exceedingly rare in the cosmos. For years, many theories centered around radioactive elements produced in supernovae, prodigious stellar explosions. Others suggested that the positrons come from neutron stars, novae, or colliding stellar winds.

In recent years, some theorists championed the idea that particles of dark matter were annihilating one another, or with atomic matter, producing electrons and positrons that annihilate into 511-keV gamma rays. But other scientists remained skeptical, noting that the dark matter particles had to be significantly lighter than most theories predicted.

"The Integral results seem to rule out dark matter as the major source of the gamma rays," says the Nature paper’s second author Gerry Skinner, who currently works at NASA’s Goddard Space Flight Center in Greenbelt, Md., Skinner is a co-investigator of Integral’s SPI (SPectrometer for Integral) instrument, which made this discovery. 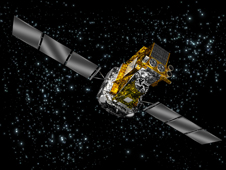 Integral found certain types of binary systems near the galactic center are also skewed to the west. These systems are known as hard low-mass X-ray binaries, since they light up in high-energy (hard) X-rays as gas from a low-mass star spirals into a companion black hole or neutron star. Because the two "pictures" of antimatter and hard low-mass X-ray binaries line up strongly suggests the binaries are producing significant amounts of positrons.

"Simple estimates suggest that about half and possibly all the antimatter is coming from X-ray binaries," says Georg Weidenspointer of the Max Planck Institute for Extraterrestrial Physics in Germany, lead author of the Nature paper.

While Integral’s discovery clears up one mystery, it raises a new one. Scientists don’t understand how low-mass X-ray binaries could produce enough positrons to explain the cloud, and they also don’t know how they escape from these systems. "We expected something unexpected, but we did not expect this," says Skinner. The antimatter is probably produced in a region near the neutron stars and black holes, where powerful magnetic fields launch jets of particles that rip through space at near-light speed.

NASA’s Gamma-ray Large Area Space Telescope (GLAST), scheduled to launch in 2008, may help clarify how objects such as black holes launch particle jets. Conceivably, it could even detect higher-energy gamma rays from heavier types of dark matter particles annihilating one another.

Launched in 2002, Integral is an international mission involving scientists and engineers from dozens of nations. NASA contributed scientists, hardware, and software for Integral, including part of the SPI instrument.
› Back To Top