NASA Researchers Find Snowmelt in Antarctica Creeping Inland
On the world's coldest continent of Antarctica, the landscape is so vast and varied that only satellites can fully capture the extent of changes in the snow melting across its valleys, mountains, glaciers and ice shelves. In a new NASA study, researchers using 20 years of data from space-based sensors have confirmed that Antarctic snow is melting farther inland from the coast over time, melting at higher altitudes than ever and increasingly melting on Antarctica's largest ice shelf. 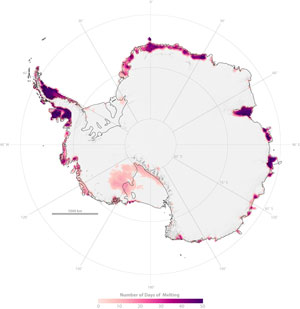 With a surface size about 1.5 times the size of the United States, Antarctica contains 90 percent of Earth's fresh water, making it the largest potential source of sea level rise. It is also a place where snow melting is quite limited because even in summer, most areas typically record temperatures well below zero.

Nevertheless, NASA researchers using data collected from 1987 to 2006 found snow melting in unlikely places in 2005: as far inland as 500 miles away from the Antarctic coast and as high as 1.2 miles above sea level in the Transantarctic Mountains. The 20-year data record was three times longer than previous studies and reaffirmed the extreme melting irregularity observed in 2005. During the same period, they also found that melting had increased on the Ross Ice Shelf, both in terms of the geographic area affected and the duration of increased melting across affected areas.

"Snow melting is very connected to surface temperature change, so it's likely warmer temperatures are at the root of what we've observed in Antarctica," said lead author Marco Tedesco, a research scientist at the Joint Center for Earth Systems Technology cooperatively managed by NASA's Goddard Space Flight Center, Greenbelt, Md., and the University of Maryland at Baltimore County, Baltimore. The study will be published on Sept. 22 in the American Geophysical Union's Geophysical Research Letters. 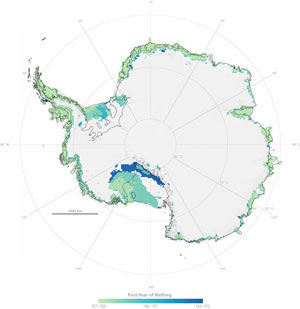 The Special Sensor Microwave Imager radiometer aboard the Defense Meteorological Satellite Program's satellites provided the researchers an update on previous studies by showing evidence of persistent snow melting – melting that occurs for at least three days or for one consecutive day and night. As the sensors fly over Antarctica, they measure the radiation naturally emitted by snow and ice at microwave frequencies. Unlike visible sensors, Microwave instruments can also detect melting below the snow surface.

"Microwave instruments are very sensitive to wet snow and can see through clouds day and night, allowing us to separate melting from dry snow to better understand when, where and for how long melting took place," said Tedesco.

Although the researchers observed less melting in some locations on the continent during the 20-year period, melting increased in others such as the Ross Ice Shelf. Increased snowmelt on the ice shelf surface can lead to melt ponds, with meltwater filling small cracks. The liquid water puts pressure on the cracks causing larger fractures in the ice shelf.

"Persistent melting on the Ross Ice Shelf is something we should not lose sight of because of the ice shelf's role as a 'brake system' for glaciers," said Tedesco. "Ice shelves are thick ice masses covering coastal land with extended areas that float on the sea, keeping warmer marine air at a distance from glaciers and preventing a greater acceleration of melting. The Ross Ice Shelf acts like a freezer door, separating ice on the inside from warmer air on the outside. So the smaller that door becomes, the less effective it will be at protecting the ice inside from melting and escaping."

The study's results from the satellite data support related research reporting a direct link between changes in near surface air temperatures and the duration and geographic area of snow melting on Antarctica. These studies, when taken together, indicate a relationship to climate change.

"Satellites have given us a remarkable ability to monitor the melting trends of glaciers and ice shelves on this immense and largely unknown continent, and to watch for unusual occurrences like those observed in 2005," said co-author Waleed Abdalati, head of the Cryospheric Sciences Branch at NASA's Goddard Space Flight Center. "Through this space-based perspective, we are really only just beginning to understand the nature of the changes that are occurring in Antarctica, and what these changes will mean for Antarctica's future contributions to sea level."