Global 'Sunscreen' Has Likely Thinned, Report NASA Scientists
A new NASA study has found that an important counter-balance to the warming of our planet by greenhouse gases – sunlight blocked by dust, pollution and other aerosol particles – appears to have lost ground. 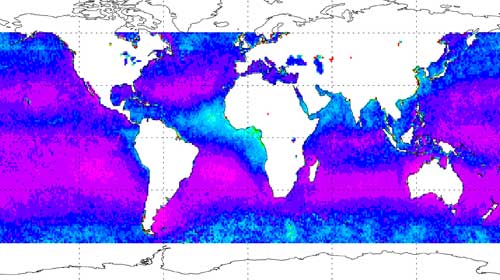 Image above: The average amount of dust, pollution and other aerosol particles in the atmosphere has dropped since the 1990s. Global averages were relatively low in the period 2002 to 2005, shown here (highest aerosol levels in light blue, lowest in purple). Credit: NASA Global Aerosol Climatology Project

The thinning of Earth’s “sunscreen” of aerosols since the early 1990s could have given an extra push to the rise in global surface temperatures. The finding, published in the March 16 issue of Science, may lead to an improved understanding of recent climate change. In a related study published last week, scientists found that the opposing forces of global warming and the cooling from aerosol-induced "global dimming" can occur at the same time.

"When more sunlight can get through the atmosphere and warm Earth's surface, you're going to have an effect on climate and temperature," said lead author Michael Mishchenko of NASA's Goddard Institute for Space Studies (GISS), New York. "Knowing what aerosols are doing globally gives us an important missing piece of the big picture of the forces at work on climate."

The study uses the longest uninterrupted satellite record of aerosols in the lower atmosphere, a unique set of global estimates funded by NASA. Scientists at GISS created the Global Aerosol Climatology Project by extracting a clear aerosol signal from satellite measurements originally designed to observe clouds and weather systems that date back to 1978. The resulting data show large, short-lived spikes in global aerosols caused by major volcanic eruptions in 1982 and 1991, but a gradual decline since about 1990. By 2005, global aerosols had dropped as much as 20 percent from the relatively stable level between 1986 and 1991.

Image above: Sun-blocking aerosols around the world steadily declined (red line) since the 1991 eruption of Mount Pinatubo, according to satellite estimates. The decline appears to have brought an end to the "global dimming" earlier in the century. Credit: Michael Mishchenko, NASA

The NASA study also sheds light on the puzzling observations by other scientists that the amount of sunlight reaching Earth's surface, which had been steadily declining in recent decades, suddenly started to rebound around 1990. This switch from a "global dimming" trend to a "brightening" trend happened just as global aerosol levels started to decline, Mishchenko said.

While the Science paper does not prove that aerosols are behind the recent dimming and brightening trends -- changes in cloud cover have not been ruled out -- another new research result supports that conclusion In a paper published March 8 in the American Geophysical Union's Geophysical Research Letters, a research team led by Anastasia Romanou of Columbia University's Department of Applied Physics and Mathematics, New York, also showed that the apparently opposing forces of global warming and global dimming can occur at the same time.

The GISS research team conducted the most comprehensive experiment to date using computer simulations of Earth's 20th-century climate to investigate the dimming trend. The combined results from nine state-of-the-art climate models, including three from GISS, showed that due to increasing greenhouse gases and aerosols, the planet warmed at the same time that direct solar radiation reaching the surface decreased. The dimming in the simulations closely matched actual measurements of sunlight declines recorded from the 1960s to 1990. 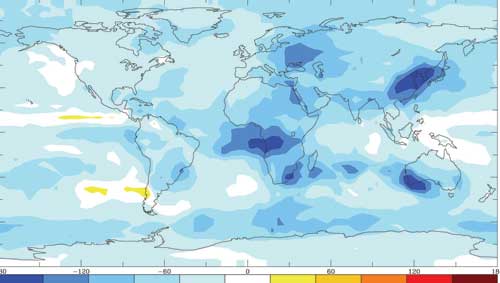 Image above: Computer simulations of Earth's climate over the entire 20th century show the effect of airborne particles called aerosols: sunlight reaching the surface decreased over most of the globe (blue) and in some regions remained unchanged (white) or slightly increased (yellow). Credit: Anastasia Romanou, Columbia University

Further simulations using one of the Goddard climate models revealed that aerosols blocking sunlight or trapping some of the sun's heat high in the atmosphere were the major driver in 20th-century global dimming. "Much of the dimming trend over the Northern Hemisphere stems from these direct aerosol effects," Romanou said. "Aerosols have other effects that contribute to dimming, such as making clouds more reflective and longer-lasting. These effects were found to be almost as important as the direct effects."

The combined effect of global dimming and warming may account for why one of the major impacts of a warmer climate -- the spinning up of the water cycle of evaporation, more cloud formation and more rainfall -- has not yet been observed. "Less sunlight reaching the surface counteracts the effect of warmer air temperatures, so evaporation does not change very much," said Gavin Schmidt of GISS, a co-author of the paper. "Increased aerosols probably slowed the expected change in the hydrological cycle."

Whether the recent decline in global aerosols will continue is an open question. A major complicating factor is that aerosols are not uniformly distributed across the world and come from many different sources, some natural and some produced by humans. While global estimates of total aerosols are improving and being extended with new observations by NASA's latest generation of Earth-observing satellites, finding out whether the recent rise and fall of aerosols is due to human activity or natural changes will have to await the planned launch of NASA's Glory Mission in 2008.

“One of Glory's two instruments, the Aerosol Polarimetry Sensor, will have the unique ability to measure globally the properties of natural and human-made aerosols to unprecedented levels of accuracy," said Mishchenko, who is project scientist on the mission.