By now, you’d think that astronomers would have found all the different classes of AGN — extraordinarily energetic cores of galaxies powered by accreting supermassive black holes. AGN such as quasars, blazars, and Seyfert galaxies are among the most luminous objects in our Universe, often pouring out the energy of billions of stars from a region no larger than our solar system. 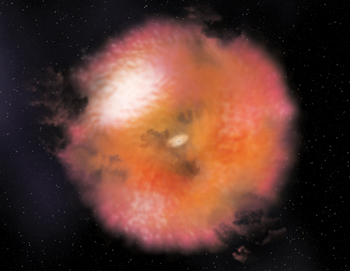 Image right: In the newly discovered type of AGN, the disk and torus surrounding the black hole are so deeply obscured by gas and dust that no visible light escapes, making them very difficult to detect. This illustration shows the scene from a more distant perspective than does the other image. Click on image for high-res version. Image credit: Aurore Simonnet, Sonoma State University.

But by using Swift and Suzaku, the team has discovered that a relatively common class of AGN has escaped detection…until now. These objects are so heavily shrouded in gas and dust that virtually no light gets out.

"This is an important discovery because it will help us better understand why some supermassive black holes shine and others don’t," says astronomer and team member Jack Tueller of NASA’s Goddard Space Flight Center in Greenbelt, Md.

Evidence for this new type of AGN began surfacing over the past two years. Using Swift’s Burst Alert Telescope (BAT), a team led by Tueller has found several hundred relatively nearby AGNs. Many were previously missed because their visible and ultraviolet light was smothered by gas and dust. The BAT was able to detect high-energy X-rays from these heavily blanketed AGNs because, unlike visible light, high-energy X-rays can punch through thick gas and dust. 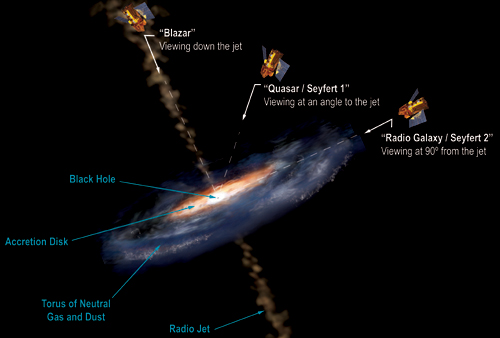 Image above: This illustration shows the different features of an active galactic nucleus (AGN), and how our viewing angle determines what type of AGN we observe. The extreme luminosity of an AGN is powered by a supermassive black hole at the center. Some AGN have jets, while others do not. Click on image for unlabeled, high-res version. Image credit: Aurore Simonnet, Sonoma State University.

To follow up on this discovery, Yoshihiro Ueda of Kyoto University, Japan, Tueller, and a team of Japanese and American astronomers targeted two of these AGNs with Suzaku. They were hoping to determine whether these heavily obscured AGNs are basically the same type of objects as other AGN, or whether they are fundamentally different. The AGNs reside in the galaxies ESO 005-G004 and ESO 297-G018, which are about 80 million and 350 million light-years from Earth, respectively.

Suzaku covers a broader range of X-ray energies than BAT, so astronomers expected Suzaku to see X-rays across a wide swath of the X-ray spectum. But despite Suzaku’s high sensitivity, it detected very few low- or medium-energy X-rays from these two AGN, which explains why previous X-ray AGN surveys missed them.

According to popular models, AGNs are surrounded by a donut-shaped ring of material, which partially obscures our view of the black hole. Our viewing angle with respect to the donut determines what type of object we see. But team member Richard Mushotzky, also at NASA Goddard, thinks these newly discovered AGN are completely surrounded by a shell of obscuring material. "We can see visible light from other types of AGN because there is scattered light," says Mushotzky. "But in these two galaxies, all the light coming from the nucleus is totally blocked." 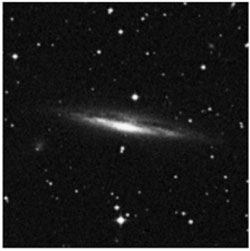 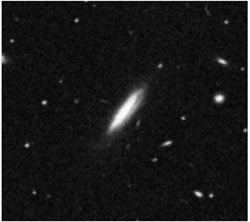 Images above: The images from the Digitized Sky Survey show the two galaxies targeted by Suzaku that have a heavily shrouded active nucleus: ESO 005-G004 (left) and ESO 297-G018 (right). Both galaxies have a spiral structure. Image Credit: DSS/UK Schmidt Telescope/AAT Board.

Another possibility is that these AGN have little gas in their vicinity. In other AGN, the gas scatters light at other wavelengths, which makes the AGN visible even if they are shrouded in obscuring material.

"Our results imply that there must be a large number of yet unrecognized obscured AGNs in the local universe," says Ueda.

In fact, these objects might comprise about 20 percent of point sources comprising the X-ray background, a glow of X-ray radiation that pervades our Universe. NASA’s Chandra X-ray Observatory has found that this background is actually produced by huge numbers of AGNs, but Chandra was unable to identify the nature of all the sources.

By missing this new class, previous AGN surveys were heavily biased, and thus gave an incomplete picture of how supermassive black holes and their host galaxies have evolved over cosmic history. "We think these black holes have played a crucial role in controlling the formation of galaxies, and they control the flow of matter into clusters," says Tueller. "You can’t understand the universe without understanding giant black holes and what they’re doing. To complete our understanding we must have an unbiased sample."

The discovery paper will appear in the August 1st issue of the Astrophysical Journal Letters.