NASA Study Finds World Warmth Edging Ancient Levels
A new study by NASA climatologists finds that the world's temperature is reaching a level that has not been seen in thousands of years.

The study appears in the current issue of the Proceedings of the National Academy of Sciences, authored by James Hansen of NASA's Goddard Institute for Space Studies, N.Y. and colleagues from Columbia University, Sigma Space Partners, Inc., and the University of California at Santa Barbara (UCSB). The study concludes that, because of a rapid warming trend over the past 30 years, the Earth is now reaching and passing through the warmest levels in the current interglacial period, which has lasted nearly 12,000 years. This warming is forcing a migration of plant and animal species toward the poles. 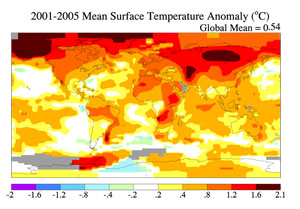 Image right: Because of a rapid warming trend over the past 30 years, the Earth is now reaching and passing through the warmest levels seen in the last 12,000 years. This color-coded map shows average temperatures from 2001-2005 compared to a base period of temperatures from 1951-1980. Dark red indicates the greatest warming and purple indicates the greatest cooling. Click image to enlarge. Credit: NASA

The study includes worldwide instrumental temperature measurements during the past century. These data reveal that the Earth has been warming at the remarkably rapid rate of approximately 0.2° Celsius (.36° Fahrenheit) per decade for the past 30 years. This observed warming is similar to the warming rate predicted in the 1980s in initial global climate model simulations with changing levels of greenhouse gases.

"This evidence implies that we are getting close to dangerous levels of human-made (anthropogenic) pollution," said Hansen. In recent decades, human-made greenhouse gases (GHGs) have become the dominant climate change factor. 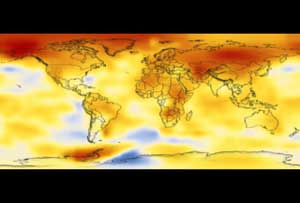 Image left: Because of a rapid warming trend over the past 30 years, the Earth is now reaching and passing through the warmest levels seen in the last 12,000 years. This color-coded map shows a progression of changing global surface temperatures from 1880 to 2005, the warmest ranked year on record. Dark red indicates the greatest warming and dark blue indicates the greatest cooling. Click image to view animation. Credit: NASA

The study notes that the world's warming is greatest at high latitudes of the Northern Hemisphere, and it is larger over land than over ocean areas. The enhanced warming at high latitudes is attributed to effects of ice and snow. As the Earth warms, snow and ice melt, uncovering darker surfaces that absorb more sunlight and increase warming, a process called a positive feedback. Warming is less over ocean than over land because of the great heat capacity of the deep-mixing ocean, which causes warming to occur more slowly there.

Hansen and his colleagues in New York collaborated with David Lea and Martin Medina-Elizade of UCSB to obtain comparisons of recent temperatures with the history of the Earth over the past million years. The California researchers obtained a record of tropical ocean surface temperatures from the magnesium content in the shells of microscopic sea surface animals, as recorded in ocean sediments. 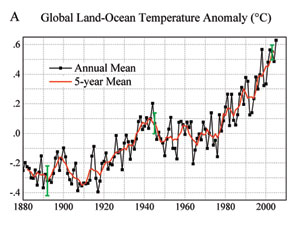 Image left: Data from this study reveal that the Earth has been warming approximately 0.2 degrees Celsius (.36 Fahrenheit) per decade for the past 30 years. This rapid warming has brought global temperature to within about one degree Celsius 1.8 Degrees Fahrenheit) of the maximum estimated temperature during the past million years. Click image to enlarge. Credit: NASA

According to Lea, “The Western Pacific is important for another reason, too: it is a major source of heat for the world’s oceans and for the global atmosphere.”

Image right: The "greenhouse effect" is the warming of climate that results when the atmosphere traps heat radiating from Earth toward space. Certain gases in the atmosphere resemble glass in a greenhouse, allowing sunlight to pass into the "greenhouse," but blocking Earth's heat from escaping into space. The gases that contribute to the greenhouse effect include water vapor, carbon dioxide (CO2 ), methane, nitrous oxides, and chlorofluorocarbons (CFCs). Credit: U.S. EPA

In contrast to the Western Pacific, the researchers find that the Eastern Pacific Ocean has not shown an equal magnitude of warming. They explain the lesser warming in the East Pacific Ocean, near South America, as being due to the fact this region is kept cool by upwelling, rising of deeper colder water to shallower depths. The deep ocean layers have not yet been affected much by human-made warming.

Hansen and his colleagues suggest that the increased temperature difference between the Western and Eastern Pacific may boost the likelihood of strong El Ninos, such as those of 1983 and 1998. An El Nino is an event that typically occurs every several years when the warm surface waters in the West Pacific slosh eastward toward South America, in the process altering weather patterns around the world. 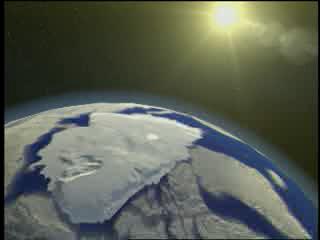 Image left: This study notes that the greatest warming is occurring at high latitudes of the Northern Hemisphere. Here, white, snow-covered terrain acts a giant reflector that bounces incoming solar radiation back into space. As the snow cover melts, the percentage of sunlight reflected, or “albedo,” decreases. Instead, the darker ocean and exposed ground can absorb the light and heat-up, thus adding more energy for continued melting. Click image to view animation. Credit: NASA

The most important result found by these researchers is that the warming in recent decades has brought global temperature to a level within about one degree Celsius (1.8° F) of the maximum temperature of the past million years. According to Hansen “That means that further global warming of 1 degree Celsius defines a critical level. If warming is kept less than that, effects of global warming may be relatively manageable. During the warmest interglacial periods the Earth was reasonably similar to today. But if further global warming reaches 2 or 3 degrees Celsius, we will likely see changes that make Earth a different planet than the one we know. The last time it was that warm was in the middle Pliocene, about three million years ago, when sea level was estimated to have been about 25 meters (80 feet) higher than today.”

Global warming is already beginning to have noticeable effects in nature. Plants and animals can survive only within certain climatic zones, so with the warming of recent decades many of them are beginning to migrate poleward. A study that appeared in Nature Magazine in 2003 found that 1700 plant, animal and insect species moved poleward at an average rate of 6 kilometers (about 4 miles) per decade in the last half of the 20th century.

That migration rate is not fast enough to keep up with the current rate of movement of a given temperature zone, which has reached about 40 kilometers (about 25 miles) per decade in the period 1975 to 2005. “Rapid movement of climatic zones is going to be another stress on wildlife” according to Hansen. “It adds to the stress of habitat loss due to human developments. If we do not slow down the rate of global warming, many species are likely to become extinct. In effect we are pushing them off the planet.”