NASA Assists Search for Woodpecker Thought to be Extinct
Unlike its more famous cartoon cousin Woody the Woodpecker, the ivory-billed woodpecker is thought to be extinct, or so most experts have believed for over half a century. 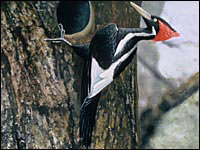 Image to right: An artist's image of what an ivory-billed woodpecker looks like. Credit: George M. Sutton/Cornell Lab of Ornithology

But last month scientists from NASA and the University of Maryland, College Park, Md., launched a project to identify possible areas where the woodpecker might be living. Finding these habitat areas will guide future searches for the bird and help determine if it is really extinct or has survived an elusive existence.

The question of whether the species still exists started when a kayaker reported spotting the woodpecker along Arkansas' Cache River in 2004. That sighting spawned an intensive search for the species by wildlife conservationists, bird watchers, field biologists and others.

In June a research aircraft flew over delta regions of the lower Mississippi River to track possible areas of habitat suitable for the ivory-billed woodpecker, one of the largest and most regal members of the woodpecker family. The project is supported by the U.S. Fish and Wildlife Service and the U.S. Geological Survey. 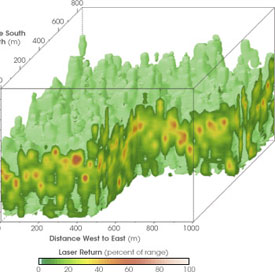 Image to left: An image produced from the airborne LVIS instrument shows a three-dimensional view of tree tops and vegetation in the tropical forest of La Selva, Costa Rica. The color indicates the amount of laser energy reflected from trees and leaves back to a sensor onboard the aircraft. Credit: John Weishampel, University of Central Florida.

Scientists from NASA’s Goddard Space Flight Center, Greenbelt, Md., and the University of Maryland used NASA’s Laser Vegetation Imaging Sensor (LVIS) onboard the aircraft. The instrument uses lasers that send pulses of energy to the Earth's surface. Photons of light from the lasers bounce off leaves, branches and the ground and reflect back to the instrument. By analyzing these returned signals, scientists receive a direct measurement of the height of the forest's leaf covered tree tops, the ground level below and everything in between.

"LVIS is aiding this search effort far beyond what aircraft photos or satellite images can provide in the way of just a two-dimensional rendering of what's below," said Woody Turner, Program Scientist at NASA Headquarters, Washington, D.C. "The laser technology gives us the third dimension, enabling us to better assess the complex vegetation structure the plane flies over." The flights are the latest step in an effort spanning over two years to find absolute evidence that a bird once thought extinct continues to survive.

"We're trying to understand the environment where these birds live or used to live, using LVIS-plotted features like thickness of the ground vegetation and tree-leaf density, in combination with other factors like closeness to water and age of the forest, to determine where we might find them," said Turner.

"Through numerous studies, we have shown the effectiveness of the data generated by this sensor for many scientific uses, including carbon removal, fire prediction, and habitat identification,” said LVIS project researcher Ralph Dubayah, a professor in the University of Maryland's Department of Geography. “Lidar technology like LVIS measures the vertical structure of the trees and ground, setting it apart from other remote-sensing systems that provide detailed horizontal information that tells us little about whether a green patch of forest is short or tall, for example. When identifying habitats, the vertical structure of the vegetation is of paramount importance to many species, including a bird like the ivory-bill.” 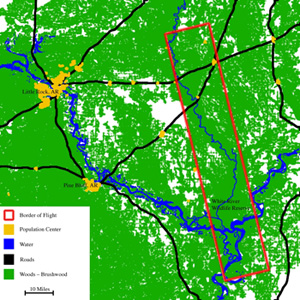 Image to right: The red border shows the forested area in the White River Wildlife Reserve of Arkansas where researchers flew in June and July, 2006 to identify a possible habitat for the ivory-billed woodpecker. Click image to enlarge. Credit: NASA

The reported sighting of the ivory-billed woodpecker inspired a year-long search by more than 50 experts working together as part of the Big Woods Conservation Partnership, led by the Cornell University’s Cornell Laboratory of Ornithology and the Nature Conservancy. Researchers have followed reported sightings across a huge swath of the southeastern United States, including the Gulf Coast, Alabama, and Florida.

In April 2005, that team published a report in the journal Science that at least one male ivory-bill still survived. However, some scientists have challenged whether it really was the ivory-billed woodpecker that was spotted. The NASA-University of Maryland project is designed to provide detailed habitat information that search teams will use beginning this fall for expanded efforts to find new evidence about the possible survival of the bird.

The project also has a broader application, according to NASA Goddard’s Bryan Blair, principal investigator for the project. “This field campaign is part of an effort to develop approaches that bring together many types of remote-sensing data for monitoring wildlife habitat.”