Washington Getting a Summertime Air Quality Exam
Summer in the city can often mean sweltering "bad air days" that threaten the health of the elderly, children and those with respiratory problems. This summer the nation’s capitol has been no stranger to such severe air-quality alerts. 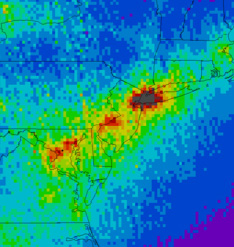 But since early July Washington area skies have been put under a unique microscope as scientists from NASA and around the country assembled a powerful array of scientific instruments -- in space and on the ground -- to dissect the region’s atmosphere. The result will be not only a better understanding of intense urban air pollution episodes but also a better toolkit to track and probe air pollution worldwide from space.

Two years ago NASA launched the third of its major Earth Observing System satellites -- Aura -- carrying a group of instruments designed to take global measurements of air pollution on a daily basis. Aura sensors can detect five of the six air pollutants regulated by the U.S. Environmental Protection Agency. But to make these 400-mile-high readings as accurate as possible, data from the sophisticated Aura instruments need to be compared to data from tried-and-true sensors on Earth.

NASA is sponsoring just such a "ground-truth" experiment this summer. Howard University Research Campus, Beltsville, Md., is hosting visiting scientists, graduate students and instruments for a six-week-long series of intensive observations. The experiment is also evaluating the next generation of instruments used in daily weather forecasting, as well as tracking one of the strongest greenhouse gases involved in climate change: water vapor, which at increased levels we feel as humidity.

The Beltsville research facility grew out of collaborations between NASA, the National Oceanic and Atmospheric Administration (NOAA), and Howard University in Washington. 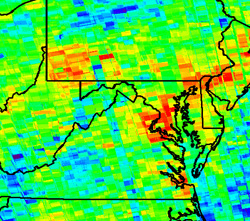 The site is dotted with instruments from the National Weather Service, the Maryland Department of the Environment, and a local television station. For this summer's experiment, additional sensors have been brought in from NASA's Goddard Space Flight Center, Greenbelt, Md.; NASA's Wallops Flight Facility, Wallops Island, Va.; Pennsylvania State University, University Park; University of Colorado, Boulder; and Trinity University, Washington. Students from many of these institutions, as well as the University of Wisconsin, Madison, and Smith College, Northampton, Mass., are involved in the day-to-day operations.

"With a large collaboration like this you can really investigate a lot of interesting aspects of air quality," says David Whiteman, who is leading Goddard's research team from the nearby NASA center. "You can look straight down through the atmosphere to the ground from the satellite and at the same time you see in great detail the whole chemical soup of pollutants near the surface from the state's air quality monitoring site located here. Multi-instrument observations like this make the Howard site a real gem."

The experiment is also focusing on a key measurement for both global climate change and local weather forecasting: water vapor. "Measuring water vapor is a tricky business, because it varies greatly in quantity around the globe," says Whiteman. But if our Earth is indeed warming, we need to understand how water vapor responds to that. Water vapor is a stronger greenhouse gas than carbon dioxide and could have a major impact on future climate."

Water vapor measurements from NASA's Aura satellite and its companion Aqua, launched in 2002, are being compared with readings at the site from several laser-based instruments called lidars that can continuously observe water vapor levels in great detail directly overhead. In addition, balloon-borne instruments called radiosondes, a standard instrument used daily around the world, are being flown to compare their accuracy with the more sophisticated research tools.

"The moisture information we get every day from radiosondes is becoming more important in numerical weather prediction and climate monitoring," says Joe Facundo, chief of the National Weather Service's Observing Systems Branch, who is participating in the Beltsville experiment. "This type of instrument comparison project lets us test improved moisture sensors." Better water vapor data from radiosondes flown around the world can lead to more accurate weather forecasts and long-term climate predictions.

New knowledge is also emerging from the experiment about the daily rise and fall of ozone pollution, which involves a complex interplay between the "chemical soup" of pollutants, sunlight, and meteorology. "We have already observed examples of the influence of a narrow stream of strong winds during the night on surface-level ozone formation," says Howard's Everette Joseph, who leads the university's team of scientists and students. "Better understanding of this process could lead to better air quality forecast methods and aid local governments in developing strategies to combat ozone pollution."