NASA Data Reveals Climate Warming Reduces Ocean Food Supply
In a NASA study, scientists have concluded that when the Earth's climate warms, there is a reduction in the ocean's primary food supply, posing a potential threat to fisheries and ecosystems. By comparing nearly a decade of global ocean satellite data with several records of Earth's changing climate, scientists found that whenever climate warmed, marine plant life in the form of phytoplankton declined. Whenever climate cooled, marine plant life became more vigorous or productive. 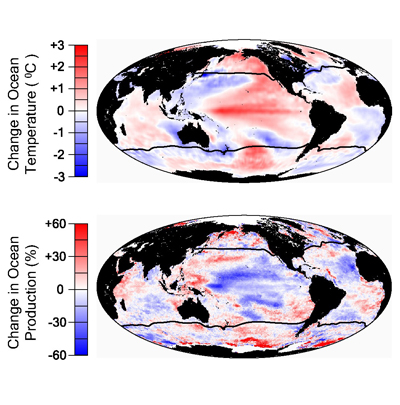 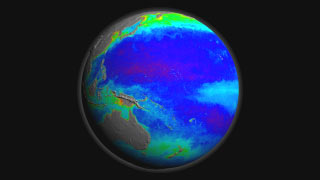 Click image to view movie.
Scientists now have nearly a decade's worth of data showing the cycle of plant life in the Earth's oceans. From space, the “ocean color” satellites measure the ocean's biology as plant productivity. In this visualization, high plant productivity is represented in green, while areas of low productivity remain blue. Data were collected by the Sea-viewing Wide Field-of-view Sensor (SeaWiFS). (+ High Resolution Source) Credit: NASA/GeoEye 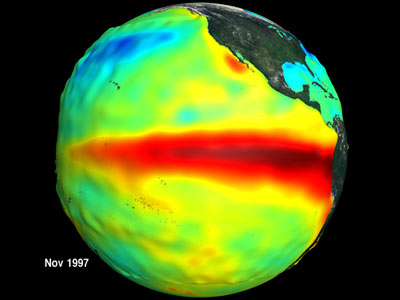 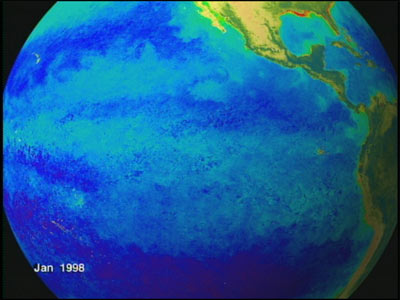 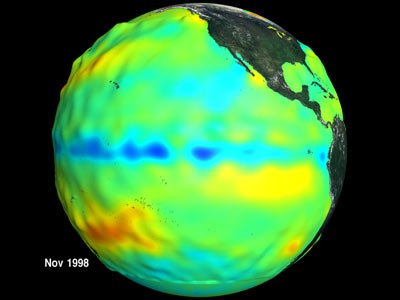 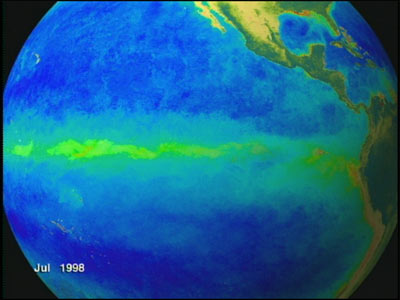 The following images show the relationship between ocean temperature and ocean biology during the 1997 El Niño and 1998 La Niña events. Ocean plant growth increased from 1997 to 1999 as the climate cooled during one of the strongest El Niño to La Niña transitions on record. Since 1999, the climate has been in a period of warming that has seen the health of ocean plants diminish. (+ High Resolution Source 1, + High Resolution Source 2) Credit: NASA/GeoEye

These findings are based on NASA's analysis of data from the SeaWiFS instrument on the OrbView-2 spacecraft, launched in 1997. Phytoplankton, the microscopic plants living in the upper sunlit layer of the ocean, are responsible for about the same amount of photosynthesis each year as all plants on land combined. Changes in phytoplankton growth influence fishery yields, marine bird populations and the amount of carbon dioxide the oceans remove from the atmosphere. Credit: NASA

Phytoplankton absorb carbon dioxide from the atmosphere and nutrient-rich waters and grows in wide colonies called blooms. As phytoplankton grow, they form the foundation for the food chain, thus passing carbon up to higher life forms. Some stored carbon settles out of the top layers of water and sinks to the bottom, becoming what oceanographers call "marine snow". This decomposing biological matter builds up on the ocean bottom, essentially sequestering the carbon from the rest of the Earth, often for geologically long periods of time. Credit: NASA 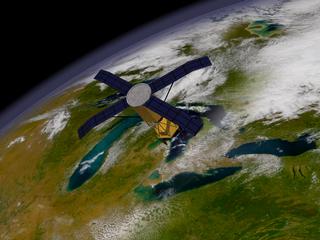 SeaWiFS (the Sea-viewing Wide Field-of-view Sensor) is designed to pioneer new global environmental observations and research. By providing a regular picture of the planet's color, SeaWiFS helps researchers learn about the state of the world's interconnected ecosystems. SeaWiFS is jointly operated by GeoEYE and NASA and is managed by Goddard Space Flight Center. (+ High Resolution Source) Credit: NASA