The planet Venus is almost the same size as Earth, so it has been called Earth's twin. It's only about 30 percent closer to the sun than Earth, and at the dawn of the space age, scientists thought its cloudy atmosphere might hide a steamy jungle planet teeming with life. However, when the first American and Russian space probes visited Venus in the 1960s, it became clear that something had gone terribly wrong with the planet's ability to support life. 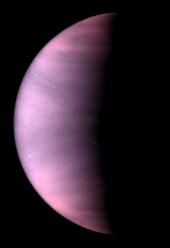 Image right: This is a Hubble Space Telescope ultraviolet-light image of the planet Venus, taken on January 24 1995, when Venus was at a distance of 70.6 million miles (113.6 million kilometers) from Earth. At ultraviolet wavelengths cloud patterns become distinctive. In particular, a horizontal "Y"-shaped cloud feature is visible near the equator. This global feature might indicate atmospheric waves, similar to high and low pressure cells on Earth. From previous missions, astronomers know that such features travel east to west along with the Venus' prevailing winds, to make a complete circuit around the planet in four days. False color has been used enhance cloud features. Credit: NASA

The spacecraft revealed Venus as a searing desert, its waterless surface crushed under a thick atmosphere almost 100 times the pressure of Earth's. The clouds that shroud the planet contain droplets of deadly sulfuric acid, not life-sustaining water. The surface temperature hovers around 800 degrees Fahrenheit, hot enough to melt lead. All known forms of life would be broiled alive.

Yet, both Venus and Earth may have had had similar climates shortly after they formed. "The big mystery Vesper will help answer is how these two similar worlds ended up with such different outcomes," said Gordon Chin, Principal Investigator for the proposed mission at NASA's Goddard Space Flight Center, Greenbelt, Md.

Vesper, the Latin name for "Evening Star" or Venus, is a proposed NASA Discovery-class mission that would increase our knowledge of what the planet's atmosphere is made of and how it changes. Understanding the atmosphere of Venus will help scientists learn how a world that might have been a tropical Eden became instead a close approximation of Hell. 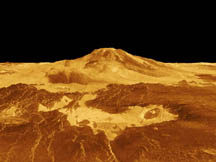 Image left: The volcano Maat Mons is displayed in this computer generated three-dimensional perspective of the surface of Venus. Radar data is combined with radar altimetry from NASA's Magellan mission to develop a three-dimensional map of the surface. The viewpoint is located 634 kilometers (393 miles) north of Maat Mons at an elevation of 3 kilometers (2 miles) above the terrain. Lava flows extend for hundreds of kilometers across the fractured plains shown in the foreground, to the base of Maat Mons. The vertical scale in this perspective has been exaggerated 10 times. Simulated color and a digital elevation map developed by the U.S. Geological Survey are used to enhance small-scale structure. Print-resolution copy (1 meg jpg image) Credit: NASA/JPL

The Vesper proposal was among approximately two dozen submitted in response to NASA's Discovery Program 2006 Announcement of Opportunity in April. NASA selected three new mission proposals for concept studies, including Vesper. As a new mission, the Vesper team will receive $1.2 million to conduct further study of the concept. If selected for continuation beyond the concept phase, Vesper must complete its mission, including archiving and analyzing data, for less than $425 million.

If approved, Vesper would observe Venus for two days. They are Venus days, which are 243 Earth days long. Venus rotates so slowly that its day is longer than its year (which lasts 224.7 Earth days).

The many mysteries Vesper will investigate include:

How the atmosphere evolved from a supposed Earthlike beginning to its current, unimaginably hostile state. Understanding what happened can provide insight to climate change on Earth.

Although the surface hardly rotates, the cloud tops swirl around the planet at over 200 miles per hour. This is called "superrotation," and scientists want to understand what drives it.

Vortices of spinning clouds resembling twin hurricanes, side by side, exist at each pole. Scientists want to understand how and why they form, and whether they produce unusual chemical reactions, similar to the polar vortices on Earth that set up conditions which allow the ozone holes to form.

Vesper will also investigate whether long-term changes in atmospheric sulfur dioxide compounds are evidence of active volcanoes on Venus.

The planet's atmosphere is mostly carbon dioxide (CO2), which should get broken down by sunlight into carbon monoxide (CO) and oxygen. That's not happening, at least not on a large scale, or scientists would have seen it by now. There must be some as yet unknown chemistry stabilizing the atmosphere.

Vesper will complement past and current missions to Venus like the European Space Agency's Venus Express. That mission arrived at Venus on April 11, 2006, and will explore the planet for two Venus days, or 486 Earth days. Vesper could enter Venus orbit in March 2015. By observing the planet's atmosphere at different times, scientists can get a more complete record of how the atmosphere is changing.

Goddard will manage the Vesper project if it is approved. NASA may select one or more investigations to continue into a development effort after detailed review of the concept studies. Decisions about which mission concepts are further developed are expected next year.