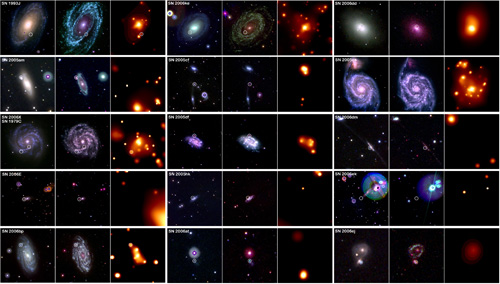 Image above: Pictured here in these 45 images are 15 recent supernovae, each shown in three wavelengths: optical, ultraviolet and X-ray. These "mug shots" capture the host galaxy of each star explosion. Collectively the images (and light spectra, not shown here) are providing rich information about the nature of supernovae and their surroundings. + High resolution image (4.3 Mb) Credit: NASA/Swift/S. Immler

In one observation, they have confirmed the origin of Type Ia supernovae, an important class of explosions used to measure distances and dark energy. In other observations they have found new mechanisms to produce X-rays and ultraviolet light.

The findings have emerged from a concerted effort by the Swift team to capture images of ordinary supernovae as rapidly as possible. Stefan Immler of NASA's Goddard Space Flight Center, Greenbelt, Md., led the analysis of these supernovae.

Image above: Supernova 2005ke, which was detected in 2005, is a Type 1a supernova, an important "standard candle" explosion used by astronomers to measure distances in the universe. Shown here is the explosion in optical, ultraviolet and X-ray wavelengths. This is the first X-ray image of a Type 1a, and it has provided observational evidence that Type Ia are the explosion of a white dwarf orbiting a red giant star. + High resolution image Credit: NASA/Swift/S. Immler

"For many supernovae, we are getting to the scene of the crime to investigate the explosion within hours to days, as opposed to the typical delay time of days to weeks," said Immler. "We are finding clues about how stars explode that would have disappeared had we turned our telescopes to the site just a few days later."

Swift's primary goal to study gamma-ray bursts, the most energetic explosions in the universe. Most gamma-ray bursts last no longer than about ten seconds, so speed is essential to detect and study the bursts. Swift has three telescopes: A gamma-ray telescope to detect the burst, and X-ray and ultraviolet/optical telescopes to provide rapid follow-up observations, all the while broadcasting the burst location to other observatories.

Image above: Going, going, gone. Supernova 2006bp quickly fades in X-rays. NASA's Swift satellite captured this supernova in X-rays in less than a day after the explosion, a speed record. In just over a week, the X-rays were gone. Typically X-ray telescopes don't observe supernova until over a week after the explosion, which is why until now no one has see such early emission of X-rays. These X-rays speak directly of the chemical composition and immediate surroundings of the exploded star. + High resolution image Credit: NASA/Swift/S. Immler

"These same properties---speed, agility and multi-wavelength capability---are proving to be crucial in unraveling the supernova mystery as well," said Swift Principal Investigator Neil Gehrels of Goddard.

There are several types of supernovae, that differ in their origins and light characteristics. In our galaxy, a supernova will occur only once or twice a century. In the nearby universe, however, dozens of stars will explode, and they are close enough to study in detail with ground- and space-based telescopes. Collectively, the Swift supernova project provides a comprehensive picture of supernovae in their host galaxies, which Immler has arranged in a massive poster reminiscent of police mug shots. Two supernovae stand out.

An explosion called SN 2005ke is the first Type Ia supernova detected in X-ray wavelengths, and it is much brighter in the ultraviolet than expected. Type Ia are called "standard candles" and are used by astronomers to measure distances in the universe, because each Type Ia shines with a known luminosity. Immler's team says it has the first observational evidence to support one theory about the origin of these supernovae. 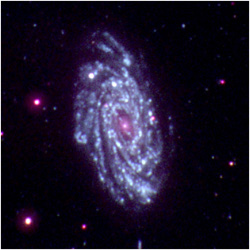 Image left: Supernova SN 2006bp is a Type II, which is the core collapse of a massive star once it runs out of fuel. X-rays are present directly after the explosion, and then fade within days. Click image to view animation (12.8 Mb) Credit: NASA/Swift/S. Immler

Immler's group has found direct evidence in the X-ray and ultraviolet light of SN 2005ke that the white dwarf, now obliterated, was indeed orbiting a red giant. The scientists detected shock waves from the explosion ramming into gas from a red giant and found no evidence of a second white dwarf. This observation may help astronomers understand the birthplaces and evolution of these supernovae, so crucial to the field of cosmology and dark energy.

The second supernova is SN 2006bp, a Type II, which is the core collapse of a massive star once it runs out of fuel. Here, Immler's team observed the explosion in detail less than a day after the event, a record for any space-based telescope. The team found that X-rays are present directly after the explosion, a surprise discovery, and that these X-rays fade within days. This means they have simply been missed in previous supernova observations because X-ray observatories don't turn to the explosion typically for at least a week. 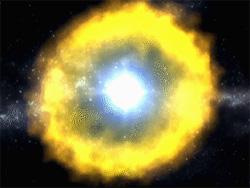 Image right: Longer gamma ray bursts, those lasting more than four seconds are caused by massive star explosions. A common supernova explosion occurs when there is no longer enough fuel to maintain the fusion process in the core of a massive star. As it begins to burn faster, it quickly depletes its hydrogen and swells into a red super-giant. The core, however, continues shrinking and, when it contains just iron, the fusion ceases to give any more energy. In less than a second, the core implodes, crushing iron atoms together while the temperature rises to over 100 billion degrees. The internal pressure, plus neutrines emitted during the formation of the neutron star, overcomes the force of gravity causing gas to shoot out from the heart of the star in an explosive shock wave. When the shock encounters the material in the star's outer layers, they are heated and propelled into space producing the brilliant display of light called a supernova." Click image to view animation (6.2 Mb) Credit: NASA

The X-rays speak directly about the chemical content and immediate surroundings of the exploded star, and they show the presence of hot gas heated by the explosion in the direct vicinity of the star. The Swift observation implies that the star's wind did not blow a cavity around the star before the explosion, as is commonly thought.

Swift, launched in November 2004, is a NASA mission in partnership with the Italian Space Agency and the Particle Physics and Astronomy Research Council, United Kingdom, and is managed by Goddard Space Flight Center. Penn State University personnel control science and flight operations from the Mission Operations Center. Immler, a member of the Swift Science Center, receives funding through the Universities Space Research Association.

Researchers are presenting their findings today at the High Energy Astrophysics Division of the American Astronomical Society meeting in San Francisco. 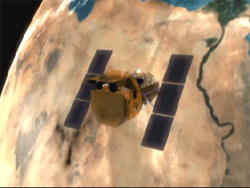