Stardust Factory Solves 25-year-old Mystery of Impossible Dust
Researchers using a "stardust factory" at NASA's Goddard Space Flight Center, Greenbelt, Md., have solved a mystery of how dying stars make silicate dust at high temperatures. Understanding this process helps us understand our origin, because this dust will become part of another generation of stars and planets, just as previous generations of stars contributed dust grains into our solar system that at least on one planet led to life. 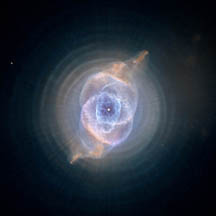 This is an image of the Cat's Eye nebula taken by the Hubble Space Telescope Advanced Camera for Surveys instrument. Nebulae like this form when dying stars heat up and eject their outer layers of gas into space. Dust grains form in the gas as it expands into space and cools. This will be the fate of our sun near the end of its life about five billion years from now. (full caption) Print-resolution copy (1 meg jpg image) Credit: NASA and the European Space Agency

Dying stars heat up internally while expelling their outer layers of gas into space. The gas expands and cools, allowing some matter in it to condense into dust grains. Observations over the last quarter century show dust grains made of silicon and oxygen (SiO or amorphous silicate grains) condensing at 1,300 degrees Fahrenheit (more than 700 degrees Celsius) in the billowing clouds of gas (nebulae) surrounding old stars. The prevailing theory said that this temperature was too high to condense solid silicate grains - the silicon and oxygen should have remained in the gas.

"Even though theory said it was impossible, stars made dust grains at high temperatures anyway -- it was happening right before our eyes," said Dr. Joseph Nuth of Goddard, lead author of a paper on this research recently submitted to the Astrophysical Journal. "So we went to our laboratory at Goddard where we vaporize material in a vacuum and observe how it condenses to see what we were missing."

The experiment revealed that the "vapor pressure" at which the dust grains condense was too high in the theory. Just as fog (water vapor) condenses out of the air when the temperature drops or the humidity rises, SiO will condense out of nebular gas at certain temperatures and pressures. Warm air holds more water as gas than cold air, which is why 100 percent humidity -- the amount of water gas required to completely saturate the air -- feels so much more uncomfortable on a hot summer day. Similarly, at high temperatures, it takes more SiO gas in the circumstellar outflow before it will become completely saturated and condense into dust grains.

The pressure at which the SiO gas starts to condense is called its saturated vapor pressure -- 100 percent humidity for SiO gas. The experiment revealed that the actual value at 1,300 degrees F was about 100,000 times lower than what was predicted by the theory. The lower actual value means that SiO gas can form dust grains in a 1,300 degree-nebula at concentrations about 100,000 times lower than previously believed. "If weather forecasters had made a similar prediction about the vapor pressure for water, they would say rain was impossible -- they would think there was never enough water in the air to make it rain," said Nuth.

"We plugged the actual, lower saturated vapor pressure values from our experiment into the theory, and it was almost good enough. The modified theory predicted that the SiO gas was very close to condensing into dust grains, but there was still some factor missing," said Dr. Frank Ferguson of the Catholic University of America, Washington, Co-author of the paper.

According to the researchers, the missing factor was that the SiO molecules can lose energy by radiating it out into space. Molecules can vibrate at different levels, each with more energy than the one below, until, at the highest vibrational levels, they have so much energy that they just break apart. If nothing excites a molecule, giving it energy by hitting it for example, the molecule will spontaneously lose energy by dropping to a lower-energy vibrational level, and will continue to do this until it reaches the “ground state” or lowest level possible. Since the pressure is low in the outflowing nebular gas, a SiO molecule there does not often collide with another gas molecule. It is also unlikely to be excited by light from the dying star, since the nebula is expanding into the darkness of deep space and only part of its field of view includes the star itself. Under these circumstances a large population of ground-state SiO molecules develops that contain minimal vibrational energy.

To begin forming a silicate dust grain, two SiO molecules have to stick together (condense). This releases energy. That energy has to go somewhere – likely into more energetic vibrational levels. Two molecules already in high-energy states are more likely to gain too much energy from the condensation reaction, so they would simply split apart again. On the other hand, two low-energy SiO molecules are more likely to remain stuck together with the reaction energy going temporarily into higher-level vibrational states until the larger molecule can radiate this energy into space. Therefore when many of the SiO molecules in the nebula are in low-energy vibrational states, they can condense at a slightly higher temperature than their vapor pressure alone indicates because these molecules are cooler than the surrounding gas.

"When we use the new vapor pressure and account for the vibrational levels of the SiO molecules in the expanding gas, silicate dust condenses easily," said Nuth. "This result shows how experiment, observation, and theory all complement each other in the search to understand what really happens in nature." The research was funded by NASA’s Cosmochemistry Research and Analysis Program, NASA Headquarters.