Scientists Nudge Closer to the Edge of a Black Hole
NASA scientists and their international partners using the new Japanese Suzaku satellite have collected a startling new set of black hole observations, revealing details of twisted space and warped time never before seen with such precision. 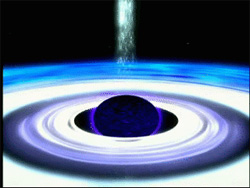 Image/animation right: Supermassive black holes are a prime target for Suzaku. These are voids in the center of most galaxies containing the mass of millions to billions of suns, all confined within a region about the size of our solar system. The black hole itself emits no light, but the process of accreting matter causes the entire region to be extremely bright in all wavelengths. Close to the edge of a black hole, X-rays are the dominant wavelength. Suzaku is sensitive to the X-ray energies emitted close to supermassive black holes, such as quasars. Click image to view animation (2.6 Mb -- no audio). Credit: NASA/GSFC

The observations include clocking the speed of a black hole's spin rate and measuring the angle at which matter pours into the void, as well as evidence for a wall of X-ray light pulled back and flattened by gravity.

The findings rely on a special feature in the light emitted close to the black hole, called the "broad iron K line,” once doubted by some scientists because of poor resolution in earlier observations, now unambiguously revealed as a true measure of a black hole's crushing gravitational force. This technique can be exploited in future X-ray missions. 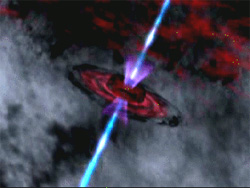 Image/animation left: Zoom into the center of a spiral galaxy to reveal a black hole. Cutaway of accretion disks reveals inside of the black hole. The chaotic black hole activity is hard to discern. >From our perspective, all activity is enshrouded in dust and gas in a region that's only a pinpoint a few light-years across in the center of a galaxy hundreds of thousands of light-years across, all typically hundreds of millions of light-years from Earth. The Suzaku satellite is sensitive to key X-ray energies that enable scientists to discern properties of the black hole. Some X-rays are emitted at the edge of the black hole; others are reflected off of dust clouds several light-years away. Suzaku provides the most complete picture of this black hole activity, and when combined with optical and radio observations, even more can be learned. Click image to view animation (3.6 Mb -- no audio). Credit: NASA/GSFC

"Across the board, we are finding the broad iron K line to be an incredibly robust measure of black hole properties," said Andrew Fabian of Cambridge University, England, who led one of the teams. "We are entering the era of precision black hole measurements."

Fabian is the team leader on Suzaku's black hole spin and light-bending observations. James Reeves of NASA's Goddard Space Flight Center, Greenbelt, Md., and Johns Hopkins University, Baltimore, led a second team that observed the first accurate measurement of the angle of a disk of material swirling around a black hole. 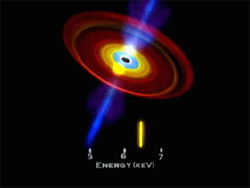 Image/animation right: Shown here is the tale of two hot blobs of matter moving around a black hole. Scientists can trace the movement through spectral analysis. The broad iron K line is the signature of hot iron plasma in the presence of strong gravity. In the absence of gravity, hot iron will produce a clean spike on a spectrograph at 6.4 kiloelectron volts. Because a black hole's gravity will tug at light itself, this iron line, when emitted near a black hole, is stretched, or broadened. The result is something that resembles the outline of a mountain range instead of a single spike. And yet the spectral signature gets even more complicated: As matter moves around a black hole, moving away and then closer to us, the spectral line undergoes a Doppler shift. The X-rays increase in energy when emitted from mater moving towards us (called a blue-shift) and decrease in energy when moving away from us (called a red-shift). Click image to view animation (2.5 Mb -- no audio). Credit: NASA/GSFC

Suzaku contains a high-energy X-ray detector and an X-ray spectrograph. Together, these instruments detect a broad range of X-ray energies, particularly the higher X-ray energies. Supermassive black holes are a prime target. These are objects in the center of most galaxies, containing the mass of millions to billions of suns confined within a region about the size of our solar system.

This spectral signal has been seen before, most recently with Europe's XMM-Newton satellite in the very same black holes observed by Suzaku. However, Suzaku has a higher sensitivity at this important energy range compared to other telescopes. And Suzaku detects even higher energies, far above 6.4 keV, also with high sensitivity. This combination is a unique satellite feature and provides a more complete picture of black hole activity.

A series of Suzaku observations conducted in 2005 and 2006 demonstrates that the broad iron K line is found coming from almost all galaxies and that the signal is real, from strong gravity, and not noise due to poor resolution. Future X-ray missions can build upon this discovery and use the broad iron K line to "image" a black hole, a long-term goal for NASA space exploration. 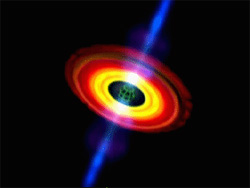 In a galaxy called MCG-6-30-15, Fabian's group confirmed that the central black hole is spinning rapidly, taking space and time along for a ride with it. The group found evidence that X-rays emitted close to the black hole, trying to escape, are bent back into the disk of matter flowing inward, away from us. This is predicted by Einstein's general relativity, hinted at in earlier observations, but seen in remarkable new detail with Suzaku.

In a galaxy called MCG-5-23-16, Reeves' team determined that the disk of material feeding the black hole, called the accretion disk, is angled at 45 degrees with respect to our line of sight. Such a precision measurement has not been possible before.

"The broad iron K line is our ticket to view matter and energy very close to a black hole," said Reeves. "Only by probing the extremes of gravity will we find flaws, if any, in Einstein's theories." 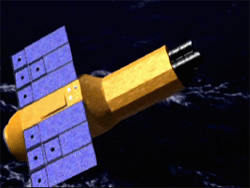 Image/animation right: The Suzaku satellite was developed by the JAXA Institute of Space and Astronautical Science (ISAS) in collaboration with U.S. scientists, and other Japanese institutions. The satellite is used to study extremely energetic objects like neutron stars, active and merging galaxies, black holes, and supernovae in the X-ray energy range. It was launched on July 10, 2005. Click image to view animation (2.5 Mb -- no audio). Credit: NASA/ISAS/JAXA

Launched in 2005, Suzaku is the fifth in a series of Japanese satellites devoted to studying celestial X-ray sources and is managed by the Japan Aerospace Exploration Agency (JAXA). This mission is a collaborative effort between Japanese universities and institutions and NASA Goddard, which provided the X-ray mirrors.

Researchers are presenting their findings today at a press conference today at the High Energy Astrophysics Division of the American Astronomical Society meeting in San Francisco.