Arctic Ice Meltdown Continues With Significantly Reduced Winter Ice Cover
As far as temperatures drop in the Arctic winter – on average to -34°C (-29°F) – a new study shows that in the last two years sea ice is shrinking on the surface of Arctic waters to record low levels. Using satellite data, scientists have observed unusually warm wintertime temperatures in the region and a resulting decline in the length of the Arctic seasonal ice. 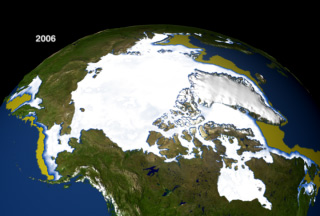 Image above:: Summer ice is not the only Arctic ice that has retreated in recent years. In 2005 and 2006, the winter ice maximum was about 6% smaller than the average amount over the past 26 years. This retreat is larger than the long-term 1.5 to 2% decrease in winter ice per decade. This visualization shows the winter sea ice cover during its annual maximum extent from 1979 to 2006, with the edge of the yellow area representing the farthest south reached by the winter ice cover since 1979. Click on image to view animation. Credit: NASA

The maximum amount of sea ice in the Arctic winter has fallen by six percent over each of the last two winters, as compared to a loss of merely 1.5 percent per decade on average annually since the earliest satellite monitoring in 1979. This is happening as summer sea ice continues its retreat at an average of ten percent per decade. 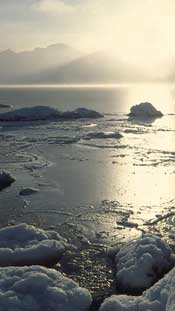 Image left: In this image, the whole of the sea surface is made of forming sea ice. Credit: NASA

"This amount of Arctic sea ice reduction the past two consecutive winters has not taken place before during the 27 years satellite data has been available," said Joey Comiso, a research scientist at NASA's Goddard Space Flight Center, Greenbelt, Md. "In the past, sea ice reduction in winter was significantly lower per decade compared to summer sea ice retreat. What's remarkable is that we've witnessed sea ice reduction at six percent per year over just the last two winters, most likely a result of warming due to greenhouse gases."

Comiso used satellite data from 1978 to 2006 to carry out the study, to be published in Geophysical Research Letters this month.

Computer simulations of the climate warming effect of greenhouse gases had predicted that winter sea ice would decline faster than summer sea ice Satellite data has shown otherwise until two years ago, when record low winter ice cover and warmer temperatures have prevailed.

Sea ice cover in the Norther Hemisphere spans nearly 6.2 million square miles in the winter. Satellite sensors are the only means to observe such a large region effectively. Comiso confirmed the accuracy of satellite sea ice data by comparing it with high-resolution satellite information and data gathered from sensitive instruments aboard aircraft. Surface temperature data from satellite sensors are checked against measurements from meteorological stations in the region.

Adding to the plight of winter sea ice, previous research has shown a trend in which the melt period lasts about two weeks longer per year annually due to summer sea ice decline. This means that the onset of freeze-up is happening later in the fall season. As a result, the ice cover in winter never gets as extensive as it would have been if the freeze-up had begun earlier. More than that, the ice reflects the sun's radiation much more efficiently than the ocean's surface. As a result, as the ice cover declines, the ocean's surface warms, causing in turn, further decline of the ice.


Image above: Five-year average of daily ice extent from January through December. The different lines represent those from 1980 to 1984 (purple), 1985 to 1989 (blue), 1990 to 1994 (green), 1995 to 1999 (gold), and 2000 to 2004 (red). Note the progression in the reduction of ice extent from the 1980s through the 1990s and to the 2000s. A shift in the occurrence of the end of the melt period (or beginning of freeze-up) towards the later part of autumn is also apparent. For comparison, the corresponding plots for individual years in 2002 (black dotted line) and 2005 (black dash line in bold) are also shown. The lowest minimum ice cover on record occurred this year (2005) while the second lowest occurred in 2002. (Note: You must have Macromedia Flash installed on your computer to view this animation.) Credit: NASA

According to Comiso, if the winter ice retreat continues, the effect could be very profound, especially for marine animals. "The seasonal ice regions in the Arctic are among the most biologically productive regions in the world," he said. "Some of the richest fisheries are found in the region, in part because of sea ice. Sea ice provides melt-water in spring that floats because of low density. This melt-water layer is considered by biologists as the ideal layer for phytoplankton growth because it does not sink, and there is plenty of sunlight reaching it to enable photosynthesis. Plankton are at the bottom of the food web. If their concentration goes down, animals at all tropics level would be deprived of a basic source of food."

In addition to climate warming, other factors can contribute to the observed retreat of winter sea ice. Hard blowing winds can compact ice, causing it to contract, making it thicker, but covering a smaller area. Wind direction may blow ice toward warmer waters, causing it to melt. Other processes can also affect sea ice, by way of warmer oceans to the south spinning up cyclones that will introduce warmer temperatures than normal that melt ice.

"A continued reduction of the Arctic winter ice cover would be a clear indicator of the warming effect of increasing greenhouse gases in the atmosphere. It would at least confirm our current understanding of the physics of the Arctic climate system that has been incorporated in our models," said Comiso.