Inexpensive Detector Sees the Invisible, In Color
An inexpensive detector developed by a NASA-led team can now see invisible infrared light in a range of "colors," or wavelengths.

The detector, called a Quantum Well Infrared Photodetector (QWIP) array, was the world's largest (one million-pixel) infrared array when the project was announced in March 2003. It was a low-cost alternative to conventional infrared detector technology for a wide range of scientific and commercial applications. However, at the time it could only detect a narrow range of infrared colors, equivalent to making a conventional photograph in just black and white. The new QWIP array is the same size but can now sense infrared over a broad range. 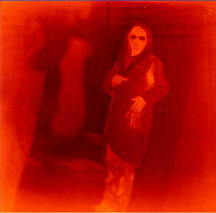 Image right: This is a false color image of a Goddard engineer in the far infrared (8-12 micrometer IR spectral band) taken with the 1 megapixel GaAs QWIP camera. Warmer temperatures are orange, cooler temperatures are dark red. Notice the thermal handprint left on her lab coat as she removes her hand from her pocket. Credit: NASA Print-resolution image (200 K jpg image)

"The ability to see a range of infrared wavelengths is an important advance that will greatly increase the potential uses of the QWIP technology," said Dr. Murzy Jhabvala of NASA's Goddard Space Flight Center, Greenbelt, Md., Principal Investigator for the project.

Infrared light is invisible to the human eye, but some types are generated by and perceived as heat. A conventional infrared detector has a number of cells (pixels) that interact with an incoming particle of infrared light (an infrared photon) and convert it to an electric current that can be measured and recorded. They are similar in principle to the detectors that convert visible light in a digital camera. The more pixels that can be placed on a detector of a given size, the greater the resolution, and NASA's QWIP arrays are a significant advance over earlier 300,000-pixel QWIP arrays, previously the largest available.

NASA's QWIP detector is a Gallium Arsenide (GaAs) semiconductor chip with over 100 layers of detector material on top. Each layer is extremely thin, ranging from 10 to 700 atoms thick, and the layers are designed to act as quantum wells.

Quantum wells employ the bizarre physics of the microscopic world, called quantum mechanics, to trap electrons, the fundamental particles that carry electric current, so that only light with a specific energy can release them. If light with the correct energy hits one of the quantum wells in the array, the freed electron flows through a separate chip above the array, called the silicon readout, where it is recorded. A computer uses this information to create an image of the infrared source. 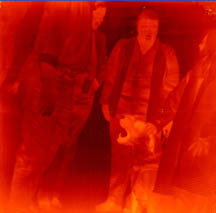 Image left: Another false color image with the QWIP camera of engineers and a seeing-eye dog (named Denver). This image illustrates the slight difference in temperatures of the scene – dark red being coldest and orange the warmest. Note the hand visible inside the labcoat pocket and the very warm tongue of Denver, curled in a yawn. Also note the different hand temperatures of the people, some warm some cold. Credit: NASA Print-resolution image (200 K jpg image)

NASA's original QWIP array could detect infrared light with a wavelength between 8.4 and 9.0 micrometers. The new version can see infrared between 8 to 12 micrometers. The advance was possible because quantum wells can be designed to detect light with different energy levels by varying the composition and thickness of the detector material layers.

"The broad response of this array, particularly in the far infrared -- 8 to12 micrometers -- is crucial for infrared spectroscopy," said Jhabvala. Spectroscopy is an analysis of the intensity of light at different colors from an object. Unlike a simple photograph that just shows the appearance of an object, spectroscopy is used to gather more detailed information like the object's chemical composition, speed, and direction of motion. Spectroscopy is used in criminal investigations; for example, to tell if a chemical found on a suspect's clothing matches that at a crime scene, and it's how astronomers determine what stars are made of even though there's no way to take a sample directly, with the stars many trillions of miles away.

The potential commercial applications are quite diverse. The utility of QWIP arrays in medical instrumentation is well documented (OmniCorder, Inc. in N.Y.) and may become one of the most significant QWIP technology drivers. The success of OmniCorder Technologies use of 256 x 256 narrow band QWIP arrays for aiding in the detection of malignant tumors is quite remarkable.

The QWIP arrays are relatively inexpensive because they can be fabricated using standard semiconductor technology that produces the silicon chips used in computers everywhere. They can also be made very large, because GaAs can be grown in large ingots, just like silicon.

The development effort was led by the Instrument Systems and Technology Center at NASA Goddard. The Army Research Laboratory (ARL), Adelphi, Md., was instrumental in the theory, design, and fabrication of the QWIP array, and L3/Cincinnati Electronics of Mason, Ohio, provided the silicon readout and hybridization. This work was conceived for, and funded by, the Earth Science Technology Office as an Advanced Component Technology development project.