Warming Climate May Put Chill on Arctic Polar Bear Population
Some travel agencies touting Arctic tours have been revving up their recent promotions to tourists about the increased likelihood they will spot polar bears in this region where several populations of polar bears live. According to scientists from NASA and the Canadian Wildlife Service, these increased Arctic polar bear sightings are probably related to retreating sea ice triggered by climate warming and not due to population increases as some may believe. 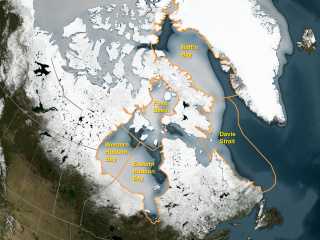 The new research suggests that progressively earlier breakup of the Arctic sea ice, stimulated by climate warming, shortens the spring hunting season for female polar bears in Western Hudson Bay and is likely responsible for the continuing fall in the average weight of these bears. As females become lighter, their ability to reproduce and the survival of their young decline. Also, as the bears become thinner, they are more likely to push into human settlements for food, giving the impression that the population is increasing. The study will be published this week in the September issue of the Journal Arctic.

Claire Parkinson, a scientist at NASA's Goddard Space Flight Center, Greenbelt, Md., and Ian Stirling, a senior scientist with the Canadian Wildlife Service, Edmonton, Alberta, used NASA satellite observations captured from 1979 to 2004 to show the reduction in sea ice cover in several specific areas where there are known polar bear populations. In most of the areas studied, they found that ice break-up in these areas has been occurring progressively earlier.

"Our research strongly suggests that climate warming is having a significant and negative effect on a primary species reliant on the sea-ice cover for survival," said Parkinson. 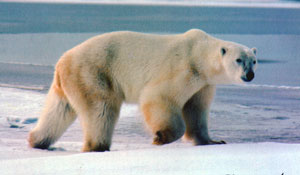 The researchers studied the sea ice in regions that are home to five different polar bear populations: western Hudson Bay, eastern Hudson Bay, Foxe Basin, Baffin Bay and Davis Strait-Labrador Sea. "Polar bears live much of their lives on the sea ice, which is fundamental for their survival, at least in terms of their traditional lifestyles," said Parkinson. "It’s the sea ice surface that provides them a platform from which to hunt seals and other marine mammals for food."

Sea ice is most scarce during the summer months, causing the bears to retreat to land and fast on their stored fat reserves until sea ice comes back in the fall. "Our concern is that if the length of the sea ice season continues to decrease, then the polar bears will have shorter periods on the ice, when they can feed, and longer periods on the land, during the open-water season in summer and early fall," she said. "Their stored fat from life on the ice will likely not provide enough nourishment for the fasting period on land, posing a clear danger to their health and, in the long term, possibly to their species."

Sea-ice cover in these regions has decreased since at least 1978, the beginning of consistent satellite monitoring. The researchers used 26 years of satellite data using data from NASA's Nimbus 7 satellite and the Defense Meteorological Satellite Program's Special Sensor Microwave Imager.

"By reviewing satellite data, we found that sea-ice cover break-up in western Hudson Bay took place about seven to eight days earlier per decade," said Stirling. "An extra month of fasting resulting from this phenomenon over four decades can significantly impact the polar bears' eating habits and survival." 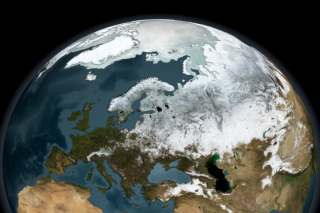 Image above: Polar bears depend on sea ice for survival. Climate warming in the Arctic has caused significant declines in overall Arctic sea ice cover and progressively earlier breakup in some areas, including western Hudson Bay. This visualization shows, twice, the August 5, 2005 - August 5, 2006 annual cycle of sea ice coverage as determined from data from the Aqua satellite's Advanced Microwave Scanning Radiometer for the Earth Observing System (AMSR-E). Click on image to view animation. Credit: NASA/JAXA

"One of the most important things that enabled us to do this study was our ability to draw on long-term satellite databases on Arctic ice,” said Stirling. "NASA has maintained an extensive and invaluable database of these observations that made it possible for us to combine our different expertise on this study."

In addition to monitoring sea-ice changes, the researchers incorporated data from previous polar bear studies in the same Arctic regions that also indicated the likelihood that progressively earlier break-up of sea ice was likely to cause problems for polar bears. "In 1980 the average weight of adult females in western Hudson Bay was 650 pounds. Their average weight in 2004 was just 507 pounds – a 143-pound reduction," said Stirling. A 1992 study in the Canadian Journal of Zoology indicated that no females weighing less than 416 pounds gave birth the following spring.

According to Stirling, if the climate continues to warm as projected by the Intergovernmental Panel on Climate Change and the ice continues to break up progressively earlier, it is likely that in 20-30 years polar bear reproduction in western Hudson Bay will be significantly limited. Similar events may eventually happen in other areas included in the study.