Airborne Dust Causes Ripple Effect on Climate Far Away
When a small pebble drops into a serene pool of water, it causes a ripple in the water in every direction, even disturbing distant still waters. NASA researchers have found a similar process at work in the atmosphere: tiny particles in the air called aerosols can cause a rippling effect on the climate thousands of miles away from their source region. 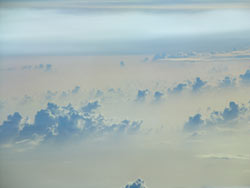 Image right: Dust from Africa's Saharan Desert lingers in high altitudes as it crosses the Atlantic Ocean. This picture was taken from an aircraft northeast of Barbados in 2006. Cumulus clouds can be seen poking through the tops of the dust layer, which is seen as a milky white haze. Click image to enlarge. Credit: NOAA

The researchers found that dust particles from the desert regions in northern Africa can produce climate changes as far away as the northern Pacific Ocean. Large quantities of dust from North Africa are injected into the atmosphere by dust storms and rising air. Airborne dust absorbs sunlight and heats the atmosphere. The heating effect ripples through the atmosphere, affecting surface and air temperatures as the dust travels.

"These highs and lows in air temperatures caused by radiation-absorbing aerosols can lead to 'teleconnection’, which refers to changes in weather and climate in one place caused by events happening far away, often more than half way around the globe," said William Lau, Chief of the Laboratory for Atmospheres at NASA's Goddard Space Flight Center, Greenbelt, Md., and author of a study published last fall in the American Meteorological Society's Journal of Climate. "North African dust can be lifted high into the atmosphere by storms and then transported across the Atlantic and Caribbean, where its effect can be far-reaching." 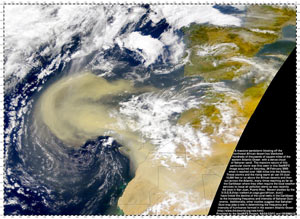 Image left: A massive sandstorm blowing off the northwest African desert blanketed hundreds of thousands of square miles of the eastern Atlantic Ocean with Saharan Sand. It was seen from the SeaWiFS satellite on Feb. 26, 2000, as it reached 1,000 miles into the Atlantic Ocean. Click image to enlarge. Credit: NASA GSFC and ORBIMAGE

According to Lau, researchers thought for years that heat changes in the atmosphere from aerosols only caused local changes in temperatures. However, "we now know they may cause more than local changes to climate," he said. Lau's computer model indicates that the heat changes caused by aerosols affect the heat balance in the air over North Africa. That change in heat creates large waves in the atmosphere that ripple as far away as Eurasia and the North Pacific.

Researchers have created complex numerical models to simulate the "still waters" of the atmosphere during North African spring – a season when climate conditions are relatively calm with light winds and light rain.

Lau's team carried out a numerical model experiment that included aerosol forcing, and then another one with identical initial conditions and lower boundary conditions, except that the aerosol forcing is removed. By comparing the weather patterns in the two experiments, they can deduce the effect of aerosol forcing. They observed the aerosols made an impact far away from their source region. In setting up their experiment, the researchers chose the northern Sahara Desert in springtime, when the weather conditions are relatively calm, allowing aerosols, like dust, to build up more in air.

An "atmospheric teleconnection" happens when unusual patterns of air pressure and air circulation happen in one place, and the energy is dispersed over large distances around the globe to other places. An atmospheric teleconnection can lead to changes in sea level pressure and temperature around the world. This study saw changes from North Africa through Eurasia to the North Pacific.

Most interesting, Lau's team found that North African-dust teleconnection led to strong cooling over the Caspian Sea (a land-locked body of water between Russia and Europe) and warming over central and northeastern Asia, where man-made aerosol concentrations are low.

"Elevated aerosols in large quantities such as dust from North Africa, or biomass burning may have global impacts," said Lau. "We expect to observe more and more real-world examples of this teleconnection phenomenon with the high volume of aerosols generated by nature and human activities around the world."