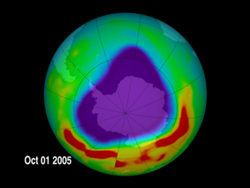 The Antarctic ozone hole's recovery is running late. According to a new NASA study, the full return of the protective ozone over the South Pole will take nearly 20 years longer than scientists previously expected.

Image right: This still image is from an animation that zooms down to Antarctica and shows the daily ozone readings from July 1, 2005 to October 25,2005. Click on the image to download animation. (+ Movie Options) Credit: NASA

Scientists from NASA, the National Oceanic and Atmospheric Administration and the National Center for Atmospheric Research in Boulder, Colo., have developed a new tool, a math-based computer model, to better predict when the ozone hole will recover.

The Antarctic ozone hole is a massive loss of ozone high in the atmosphere (the stratosphere) that occurs each spring in the Southern Hemisphere. The ozone hole is caused by chlorine and bromine gases in the stratosphere that destroy ozone. These gases come from human-produced chemicals such as chlorofluorocarbons, otherwise called CFCs.

The ozone layer blocks 90-99 percent of the sun's ultraviolet radiation from making contact with Earth. That harmful radiation can cause skin cancer, genetic damage, and eye damage, and harm marine life. 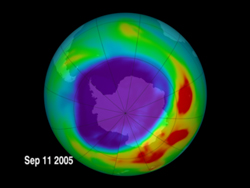 Image left: This image shows the ozone hole on September 11, 2005. The ozone thinning over Antarctica reached its maximum extent for the year on this date. (+ High Res .tif) Credit: NASA

For the first time, a model combines estimates of future Antarctic chlorine and bromine levels based on current amounts as captured from NASA satellite observations, NOAA ground-level observations, NCAR airplane-based observations, with likely future emissions, the time it takes for the transport of those emissions into the Antarctic stratosphere, and assessments of future weather patterns over Antarctica.

The model accurately reproduces the ozone hole area in the Antarctic stratosphere over the past 27 years. Using the model, the researchers predict that the ozone hole will recover in 2068, not in 2050 as currently believed.

"The Antarctic ozone hole is the poster child of ozone loss in our atmosphere," said author Paul Newman, a research scientist at NASA's Goddard Space Flight Center, Greenbelt, Md. And lead author of the study. "Over areas that are farther from the poles like Africa or the U.S., the levels of ozone are only three to six percent below natural levels. Over Antarctica, ozone levels are 70 percent lower in the spring. This new method allows us to more accurately estimate ozone-depleting gases over Antarctica, and how they will decrease over time, reducing the ozone hole area."

International agreements like the Montreal Protocol have banned the production of most chemicals that destroy ozone. But the researchers show that the ozone hole has not started to shrink a lot as a result. The scientists predict the ozone hole will not start shrinking a lot until 2018. By that year, the ozone hole's recovery will make better time.