Plants Become Air Quality Detectives at Goddard Visitor Center
What does a garden have to do with the chemistry of the atmosphere and air quality? One of the newest exhibits at NASA Goddard’s Visitor Center, Greenbelt, Md., is a project related to NASA’s Aura satellite. Aura is currently studying atmospheric chemistry and air pollution from space. The new Aura Ozone Monitoring Garden is used to study air quality from the ground by seeing how ozone in the air damages the leaves of certain plants. 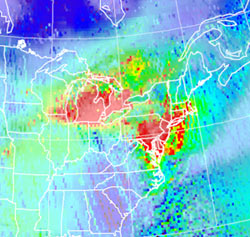 Image right: This image from Aura's Ozone Monitoring Instrument shows the amount of nitrogen dioxide in the atmosphere over the eastern United States on January 29, 2005. Air quality alerts were issued for Michigan during this period. Nitrogen dioxide leads to the formation of ozone in the lower atmosphere. Red areas show high levels; the purple areas are regions of clouds that block the instrument's view of nitrogen dioxide below. Credit: NASA Aura

During the summer months of intense sunlight, the air surrounding major urban areas undergoes dramatic changes. Ozone is formed when chemical pollutants that are by-products of human activities such as biomass burning and the combustion of fossil fuels react in the presence of sunlight. Ozone is a molecule that at ground level is a harmful air pollutant in high or prolonged concentrations.

Ozone tolerance among plants and people varies. According to research at the Great Smoky Mountain National Park and elsewhere, many common species of plants are sensitive to high concentrations of ozone. The Aura Ozone Monitoring Garden features plants that are known to be ozone sensitive, such as white dogwood (Cornus florida) and cardinal flower (Lobelia cardinalis).

Many of the plants that have been found to be ozone sensitive thrive in a wide range of the temperate environments within the continental United States. Aura education personnel at Goddard chose a variety of plants for the garden that represent different growing environments, from agriculture to horticulture. 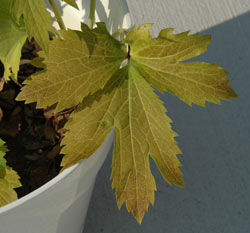 Image left: Ozone damage on a cutleaf coneflower produces purple spots, or “stippling,” on the upper surface of the leaf. Credit: Jeannie Allen/SSAI

When exposed to high concentrations of ozone over time, such plants develop characteristic tiny, evenly spaced dots known as “stippling” and also yellowing on the upper surfaces of their leaves. Eventually leaves that accumulate enough ozone damage die and fall off. Observations of ozone-sensitive plants over the course of the growing season can yield valuable information about local ozone concentrations.

The amount of ozone in the lower atmosphere before industrial times probably ranged from 15 to 25 parts of ozone per billion (ppb) of air . However, under certain conditions that are now common, ozone concentrations can reach as high as 60, 70, or 80 ppb or much higher for several hours at a time. These elevated ozone concentrations may spark “Code Orange” or “Code Red” air quality days. Citizens are urged to limit their outdoor activities during such days.

Until recently it was believed that poor air quality was an issue of concern only for those living in metropolitan areas. However, recent data from the Aura spacecraft confirm that pollutants created in one region of the globe travel great distances. Aura’s findings are supported through ground observations of air quality. 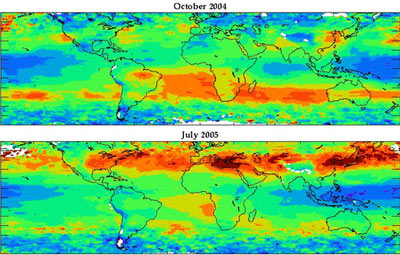 Because ozone air pollution moves so readily from one area to another, and because some ozone-producing chemicals come from certain species of plants, rural areas can experience very high levels of ozone. Air quality is an issue of concern for everyone, including people living and vacationing in rural environments.

Aura educational staff initiated the Aura Ozone Monitoring Garden after receiving training from the U.S. government Hands on the Land’s “Ozone Biomonitoring Garden Study.” This project involves making detailed scientific observations of cut-leaf coneflower (Rudbeckia laciniata) plants over the course of a growing season. These data are used as a supplement for ongoing research on the effects of ozone on plants. The Aura Ozone Monitoring Garden is used as an educational tool for school groups and visitors to Goddard.

"Anyone who is curious about ozone levels where they live or work and is willing to make careful observations over time can become involved in ozone monitoring," says Jeannie Allen, Aura education staff. Such "citizen scientists" can learn what species of plants are known to be ozone-sensitive and how to recognize ozone injury to plant leaves. The extent of ozone injury will not tell you quantitative ozone amounts, but they can give a general indication of the health of the air around the plants.

One of the more difficult aspects of monitoring air quality is the amount of variability in ozone concentrations with time and location. The variable nature of the amount of ozone in the air we breathe is one of the reasons why having an ozone monitoring garden is so interesting. Plants in such a garden in one location may exhibit ozone damage, while plants in another location nearby may show no signs of ozone damage at all, even within a single neighborhood. By investigating ozone monitoring gardens, students and citizens alike can learn more about the air in their own neighborhoods.