Newly Forming Solar System Has Planets Running Backwards
Call it the biggest beltway ever seen. Astronomers have discovered a newly forming solar system with the inner part orbiting in one direction and the outer part orbiting the other way. 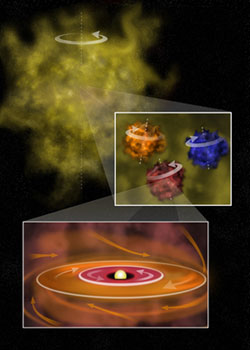 Image to right: Top view - A huge star-forming region is rotating globally in the direction shown by the white arrow. This large region can give birth to multiple stellar systems. Middle view - A detailed view inside the large star-forming region shows three protostars forming as the region collapses. The collapse process is chaotic and can cause eddies, allowing newly-forming stars to rotate in different directions and at different speeds, as shown by the arrows. Bottom view - One protostellar cloud collapses further into a disk-like structure that rotates counter-clockwise (white arrows) about the newly-formed protostar. In addition, the protostar siphons off material from a second, passing protostellar cloud rotating in the opposite direction. Because of this, the outer part of the disk rotates clockwise (yellow arrows). Eventually, planets will form from the material in this disk, with the outer planets orbiting the star in the opposite direction from the inner planets. Click on image to enlarge. Credit: Bill Saxton, NRAO/AUI/NSF

Our solar system is a one-way boulevard. All the planets --- from Mercury out to Pluto and even the newly discovered objects beyond --- revolve around the Sun in the same direction. This is because the Sun and planets formed from the same massive, rotating cloud of dust and gas. The motion of that cloud set the motion of the planets.

The fact that a solar system can have planets running in opposite directions is a shocker.

"This is the first time anyone has seen anything like this, and it means that the process of forming planets from such disks is more complex than we previously expected," said Anthony Remijan of the National Radio Astronomy Observatory.

Call it one of the largest road construction projects, too. This solar system, about 500 light-years from Earth in the direction of the constellation Ophiuchus, is a work in progress. At its center is a young star. No planets have formed yet and likely won't for millions of years. What Remijan and Hollis saw were two flat and dusty disks rotating around the equatorial plane of the central star in opposite directions.

"The solar system that likely will be formed around this star will include planets orbiting in different directions, unlike our own solar system," Hollis said.

How did this rare scenario come to be?

"We think this system may have gotten material from two clouds instead of one, and the two were rotating in opposite directions," Remijan said.

There is sufficient material to form planets from both parts of the disk, he added. The budding solar system is in a large, star-forming region where chaotic motions and eddies in the gas and dust result in smaller cloudlets that can rotate in different directions.

Remijan and Hollis study star-forming clouds by analyzing radio waves emitted by molecules within the clouds at specific, known frequencies. The motion of the molecules will cause the frequency to shift to a higher or lower frequency, depending on the direction of the motion. This is called a Doppler shift. Actually, it is the same technology that police officers use to nab speeders on a beltway.

The VLA observations of the "beltway" solar system revealed the motion of silicon monoxide (SiO) molecules. These emit radio waves at about 43 GigaHertz (GHz). When Remijan and Hollis compared new VLA measurements of the motion of SiO molecules close to the young star with earlier measurements of other molecules farther away from the protostar, they realized the two were orbiting the star in opposite directions.

This is the first time such a phenomenon has been seen in a disk around a young star. Yet who's to say the arrangement is uncommon? As astronomers find more and more extra-solar planets (over a hundred so far and counting), they are realizing that solar systems come in many shapes and sizes.

A paper describing this result will appear in the April 1 edition of the Astrophysical Journal.

The VLA comprises 27 radio antennas spread out across 36 kilometers in a Y formation outside of Socorro, N.M. This is the site featured in the movie Contact. The National Radio Astronomy Observatory operates the facility.