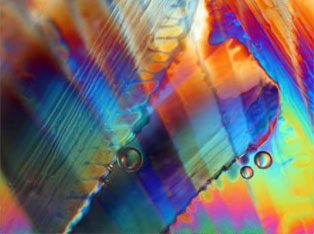 Wasilewski, an astrophysicist at NASA's Goddard Space Flight Center in Greenbelt, Md., uses polarized light to see the colors in the ice crystals that make up ice and snow. Light has wave-like properties, one of which is vibration. Ordinary white light vibrates in many directions, but a polarizing filter blocks all light except that which is vibrating in a single direction. For example, when light reflects off nonmetallic surfaces such as glass, water, or a road surface, the light is polarized, or just vibrating in one direction. Un-polarized light like the light emitted by the sun or a lamp in the classroom goes in all directions. 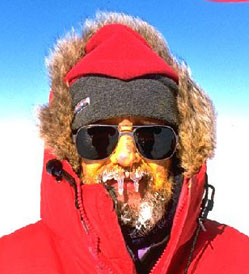 "Ice is different for the various Olympic sports," Wasilewski said. "The ice is softer for figure skaters than it is for hockey players. Figure skaters need to dig in with their toe picks for jumps. Ice hockey players want the hard ice that makes the ice fast and easier to skate on. With a microscopic look at the ice using the spectrum, I'm able to see how the ice differs." 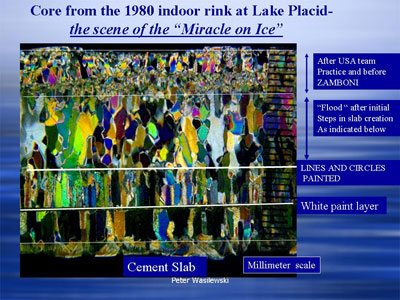 Maintaining the ice arenas at the OIympics is also pretty complicated. Since the ice is used for different venues at different times, it's important that it be the correct consistency for the sport, and that means careful analysis by the crew to either heat up or cool down the ice so that it matches what is needed to bring out the best performance by the Olympians.

Wasilewski also knows a lot about snow. He noted that snow from snow guns is not in a crystal shape, but is more like tiny snowballs. In fact, he said that sometimes Olympic events are cancelled whenever there is a lot of natural snow, because it tends to be too powdery. Powder snow tends to slow skiers and snowboarders down, so the preference is for the manmade (icier) snow or natural snow that has been processed to ensure a hard, almost icy surface for the downhill events. Natural and man-made snow start out very different but after time, natural forces and various grooming techniques work in concert to make them look similar. The delicate and varied snowflake forms might be cherished by the recreational skier who loves the powder slopes, but competition downhill skiing requires a hard, well packed surface.

Wasilewski's interest in ice and ice photography started with his friend, Dr. Tony Gow, now retired from the U.S. Army's Cold Regions Research and Engineering Laboratory. Gow spent 45 years studying ice. "He was fascinated by how much he could learn just from the shapes and colors in ice. His enthusiasm was infectious, and I became fascinated as well," said Wasilewski.

For more than 25 years, Wasilewski has been studying snow and ice, making six Antarctic expeditions and developing a winter camp in Lake Placid, New York, former home to the winter Olympics of 1932 and 1980. His camp, called "The History of Winter," is in part funded by a NASA education program and teaches science teachers about snow and ice. In February 2006, as part of the upcoming "International Polar Year" celebration of 2007-2008 his camp launched "The Global Snowflake Network." The GSN will identify snowflake shapes during snow falls and record on a web-site wherever snow falls on Earth. 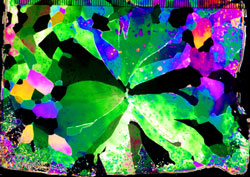 During one of Wasilewski’s treks to Lake Placid he sampled ice at the shallow Cascade Lake. A thin section revealed petal shaped ice forms that were the result of a spiral growth pattern induced by the bubbling of methane gas that was produced by the decay of submerged vegetation present when the ice froze. At that moment, he realized that color and form could change depending on the thickness and orientation of the ice. "I started playing around, making ice crystals in my refrigerator and photographing them, and 'Frizion' was born," said Wasilewski.

The name "Frizion" is a combination of the words "frozen" and "vision." Those words describe this new art form. Each piece begins as a vessel of water which is then frozen, manipulated and viewed through polarized light - the resultant image, after much trial and error, becomes a Frizion. The special crystallographic and optical properties of ice (transparency, double refraction, and an amazing variety of crystalline forms) make it a unique medium for artistic studies. 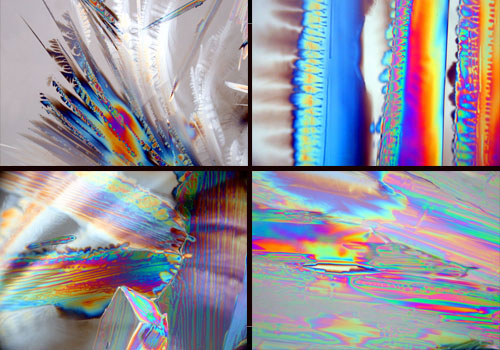 Right now, things are looking very good for the Americans at the 2006 Winter Olympics in Torino, Italy, and if Peter Wasilewski has anything to do with it, the athletes will be skating on thin ice (or is it thick ice?) well, it's whatever ice they need to perform their best and hopefully win one of those elusive medals. Would that be a miracle on ice? To quote a favorite writer of Wasilewski's, "If there is magic on this planet, it is contained in water"…Loren Eiseley." Not a miracle, just magic.