Milky Way Churns Out Seven New Stars Per Year, Scientists Say
In an investigation smacking of forensic detective work, scientists have measured the rate of star death and rebirth in our galaxy by combing through the sparse remains of exploded stars from the last few million years. 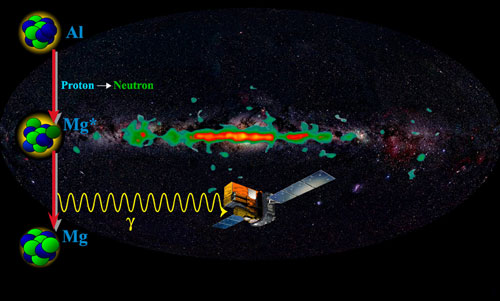 Image above: By mapping patches of radioactive aluminum in the Milky Way, scientists could determine the number of stars that are born and die each year in our galaxy. Credit: MPE Garching/Roland Diehl

As reported in the January 5 issue of Nature, the scientists used the European Space Agency's INTEGRAL satellite to explore regions of the galaxy shining brightly from the radioactive decay of aluminum-26, an isotope of aluminum. This aluminum is produced in massive star and in their explosions, called supernovae, and it emits a telltale light signal in the gamma-ray energy range.

The team's multi-year analysis revealed three key findings: The team confirmed that aluminum-26 is found primarily in star-forming regions throughout the galaxy; about once every 50 years a massive star will go supernova in our galaxy (yes, we are overdue); and each year our galaxy creates on average about seven new stars.

NASA Goddard Space Flight Center in Greenbelt, Md., oversees the INTEGRAL U.S. Guest Observer Facility, which funded part of this research. These results will also be presented January 9 at the meeting of the American Astronomical Society in Washington.

"Our galaxy isn't the biggest producer of stars and supernovae in the universe, but there's still plenty of activity," said Dr. Roland Diehl of Max Planck Institute for Extraterrestrial Physics in Garching, Germany, lead author on the Nature report. "A sustained star formation rate of this magnitude is just what one needs to drive its chemical and dynamical evolution, which has led to life on Earth."

These rates also imply that per year about four solar masses of interstellar gas are converted to stars, the team said. About ten billion years into its life, the Milky Way galaxy has now converted about 90 percent of its initial gas content into stars.

Star death is intricately tied to star creation because it provides the raw material --- elements strewn into interstellar space --- as well as the energy in the form of shock waves that prompts cool gas clouds to condense and form stars. Scientists estimate formation rates through observations of supernovae in other galaxies or tracers associated with new stars, such as infrared light from dust production or ultraviolet light from the heat these stars make.

"Determining star formation rates in our galaxy can be difficult because gas and dust in the Milky Way's spiral arms obscure star formation taking place all around us," said Dr. Bonnard Teegarden, INTEGRAL U.S. Project Scientist at NASA Goddard. "Gamma rays, more so than other forms of light, can penetrate this dust. This approach based on gamma rays is the most direct method available to determine the recent history of stellar activity."

"The radioactive isotope aluminum-26 has a half-life of about 750,000 years," said Prof. Dieter Hartmann of Clemson University in Clemson, S.C., a co-author on the Nature report and lead presenter at the AAS meeting. "This means it traces all massive stars that have been lively or perished in the past several million years. More important, we can detect this aluminum everywhere. Visible light is obscured by the dust and gas in the galactic plane, but the gamma rays from aluminum-26 shines through even the dustiest regions."

INTEGRAL provides the resolution necessary to infer the spatial distribution of aluminum-26. Diehl's team could determine, from the Doppler effect, that aluminum-26 rotates with the galaxy. This implies that aluminum-26 is ubiquitous and not local to the solar neighborhood.

The team used a global spatial distribution model to convert the observed gamma-ray flux to a total amount of aluminum-26. It came to about three solar masses in the entire galaxy, which doesn't seem like a lot, but only little aluminum-26 is created in any given star explosion. From this mass and theories of how much material each massive star will eject, it was a straightforward calculation to determine star death and star formation rates.