The Little Red Spot's winds, now raging up to approximately 400 miles per hour, signal that the storm is growing stronger, according to the NASA-led team that made the Hubble observations. The increased intensity of the storm probably caused it to change color from its original white in late 2005, according to the team. 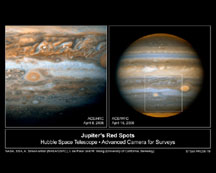 Image right: These are two views of Jupiter's Little Red Spot taken with the Hubble Space Telescope in April 2006. The left image is a close-up view. In the right image, a box has been added to show the Little Red Spot's location on Jupiter. The larger Great Red Spot, which has been observed for the past 400 years, can be seen to the right. Print-resolution image (1 meg jpg image) Credit: NASA / ESA / Amy Simon-Miller

"No one has ever seen a storm on Jupiter grow stronger and turn red before," said Amy Simon-Miller of NASA's Goddard Space Flight Center, Greenbelt, Md., lead author of a paper describing the new observations appearing in the journal Icarus. "We hope continued observations of the Little Red Spot will shed light on the many mysteries of the Great Red Spot, including the composition of its clouds and the chemistry that gives it its red color."

Although it seems small when viewed against Jupiter's vast scale, the Little Red Spot is actually about the size of Earth, and the Great Red Spot is around three Earth diameters across. Both are giant storms in Jupiter's southern hemisphere powered by warm air rising in their centers.

The Little Red Spot is the only survivor among three white-colored storms that merged together. In the 1940s, the three storms were seen forming in a band slightly below the Great Red Spot. In 1998, two of the storms merged into one, which then merged with the third storm in 2000. In 2005, amateur astronomers noticed that this remaining, larger storm was changing color, and it became known as the Little Red Spot after becoming noticeably red in early 2006.

The new Hubble observations by the team reveal that winds in the Little Red Spot have grown stronger compared to previous observations. In 1979, Voyager 1 and 2 flew by Jupiter and recorded that top winds were only about 268 miles per hour in one of the "parent" storms that merged to become the Little Red Spot. Nearly 20 years later, the Galileo orbiter revealed that top wind speeds were still the same in the parent storm, but winds in the Great Red Spot blew at up to 400 miles per hour. The team used Hubble's new Advanced Camera for Surveys instrument to discover that top wind speeds in both storms are now the same, because this instrument has enough resolution to track small features in these storms, revealing their wind speeds.

Scientists are not sure why the Little Red Spot is growing stronger. One possibility is a change in size. These storms naturally fluctuate in size, and their winds spin around their central core of rising air. If the storm were to become smaller, its spiraling winds would increase the same way spinning ice skaters turn faster by pulling their arms closer to their bodies. Another possibility is that it's the only survivor. "The lack of other large storms in the same latitude on Jupiter leaves more energy to feed the Little Red Spot," said Simon-Miller.

According to the team, the increased intensity of the Little Red Spot probably explains why it changed color. It is likely to be behaving like the Great Red Spot for two reasons: it has the same wind speed and the team's color analysis showed that it really is the same color as the Great Red Spot. It's probably pulling up gaseous material from far below that changes color when exposed to ultraviolet radiation in sunlight. The question remains whether the storm is pulling up something that it wasn't before, because its increased intensity allows it to reach deeper, or whether it is pulling up the same material but the higher winds allow the storm to hold it aloft longer, increasing the time it is exposed to solar ultraviolet light and turning it red.

The team could confirm exactly what the red material is if they are able to use a technique called spectroscopy in future observations of the Little Red Spot. Spectroscopy is an analysis of the light given off by an object. Each element and chemical gives a unique signal - brightness at specific colors or wavelengths. Identifying these signals reveals an object's composition.

However, spectroscopy of Jupiter's atmosphere is complicated because it has many chemicals that could turn red if exposed to ultraviolet light. "We need to simulate different possible Jupiter atmospheres in a lab so we can discover what spectrometric signals they give. We will then have something to compare with the actual spectrometric signal," said Simon-Miller.