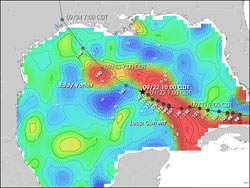 Image right: This is an image of sea surface height measurements from NASA’s Topex/Poseidon and Jason satellites, during Hurricane Rita's trek in the Gulf of Mexico in Sept. 2005. This image shows ocean circulation patterns. Florida (right) and Texas and Mexico (left) are colored in gray. Red indicates strong circulation of warm waters. Sea surface height is a useful measure of potential hurricane activity because storm-fueling warm water is higher than surrounding cooler water. The area shown in red is approximately 35 to 60 centimeters (roughly 13 to 23 inches) higher than the surrounding Gulf. Credit: NASA/JPL/University of Colorado CCAR 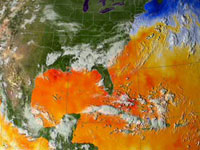 David Adamec, an oceanographer at NASA's Goddard Space Flight Center, Greenbelt, Md. said that "the current temperature signal at the end of April is near normal and the ocean surface temperature has not yet caused the atmosphere to respond in a La Nina-like way." Adamec used what is called a NASA coupled atmosphere-ocean land computer model. This model, developed at Goddard, is used for experimental forecasts of the ocean, land and atmosphere for periods 3-12 months in the future. The data used came from 2 NASA satellites: Jason and QuikSCAT. Jason provided sea-surface height information, and QuikSCAT provided surface wind data.

Adamec said that in order for La Nina to have an effect on the Atlantic Ocean hurricane season, it would have to exist for a much longer time, especially into peak hurricane season which is August and September.

Image right: La Niña is characterized by unusually cold ocean temperatures in the central equatorial Pacific. The colder than normal water is depicted in this image in blue. During a La Niña stronger than normal trade winds bring cold water up to the surface of the ocean. Credit: NASA

According to 12 major ocean-atmosphere computer models, the equatorial Pacific will be neutral to warm in August, when it really matters for hurricanes. August and September are the peak season for hurricane formation in the Atlantic Ocean. According to scientists, the atmosphere takes about two weeks to "react" to a change in ocean surface temperature.

Forecasters and other scientists still expect a greater than average number of Atlantic Ocean hurricanes this year, but La Nina will not be a factor in that. The more active season is expected because of other environmental conditions favorable to hurricanes, such as the location of the Bermuda high removing much of the wind shear in the western Atlantic that thwarts hurricanes, warm sea surface temperatures in the Gulf of Mexico. 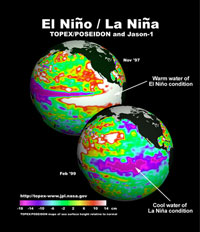 According to NOAA, these systems have a much greater likelihood of becoming major hurricanes and of eventually threatening the U.S. and Caribbean Islands.

Bill Patzert, oceanographer at NASA's Jet Propulsion Laboratory in Pasadena, Calif. noted that, "The recent increased frequency of the hurricanes is thought to be part of a larger decades-long cycle of alternating increases and decreases of hurricane activity. The current busy hurricane cycle began in 1995 and could continue for another 10 to 25 years. For the U.S. East and Gulf coasts, the fading La Nina is a real good thing, but Atlantic sea surface temperatures are still very toasty. It's the summer conditions that will dictate the fall hurricane activity, and I suspect those forecasts will be modified."