Hybrids in the Universe?
Scientists recently made a discovery that forced them to re-think their theories on the most powerful explosions in the cosmos - gamma ray bursts. 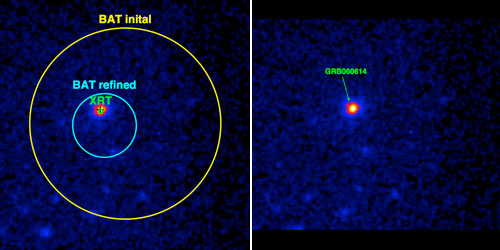 Click image to enlarge
Image above: X-ray image of the gamma-ray burst GRB 060614 taken by the XRT instrument on Swift. The burst glowed in X-ray light for more than a week following the gamma-ray burst. This so-called "afterglow" gave an accurate position of the burst on the sky and enabled the deep optical observations made by ground-based observatories and the Hubble Space Telescope. Credit: NASA/Swift Team

A year ago scientists thought they had figured out the nature of gamma-ray bursts. They signal the birth of black holes and traditionally, fall into one of two categories: long or short. A newly discovered hybrid burst has properties of both known classes of gamma-ray bursts yet possesses features that remain unexplained.

The long bursts are those that last more than two seconds. It is believed that they are ejected by massive stars at the furthest edge of the universe as they collapse to form black holes. 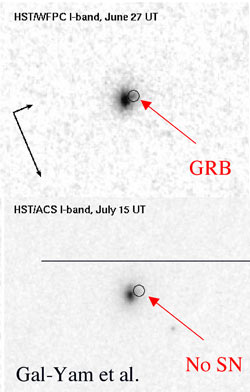 Image left: Image of the host galaxy of GRB 060614 taken with the Hubble Space Telescope. The top panel shows the galaxy on June 27, 2006 with the gamma-ray burst afterglow clearly visible in the circle to the upper right. The bottom panel shows the galaxy on July 15 with the gamma-ray burst afterglow faded away and no light from a supernova detected. Credit: A. Gal-Yam (Caltech)

Short bursts persist for less than two seconds, with some only lasting a few milliseconds. The cause is thought to be the merger of two neutron stars – or a neutron star and a black hole – to form a new or bigger black hole.

On June 14, 2006, NASA’s Swift satellite presented scientists with a burst that doesn’t fit into either category. At the time of the event, over a dozen telescopes, including the Hubble Space Telescope and several ground-based observatories, collected data and contributed to the study of this burst. Named GRB 060614 (after the date it was detected), this one has qualities of both the long and short bursts.

The existence of this hybrid, coming from 1.6 billion light years away in the constellation Indus, suggests that the black hole birth happened in a different way from other known bursts. The hybrid lasted for 102 seconds, a long burst property. But long bursts are usually followed by a supernova, or star explosion. GRB 060614 had no associated supernova, and is in fact in a galaxy with very few stars that could produce either a supernova or a long burst.

Image right: The collapsing star scenario that is one of the leading contenders as the cause of gamma-ray bursts. This artist's concept of the collapsar model shows the center of a dying star collapsing minutes before the star implodes and emits a gamma-ray burst that is seen across the universe. Many scientists say longer bursts (more than four seconds in duration) are caused by massive star explosions. Click image to view animation Credit: NASA/Dana Berry, Skyworks Digital

No current scientific models can explain the existence of this hybrid burst. Most scientists believe something new may be responsible. Are stars that produce hybrid bursts inherently different from the kind that make supernovae? “This is brand new territory; we have no theories to guide us,” said Dr. Neil Gehrels of NASA GSFC.

The burst is perhaps not unprecedented. Archived data from the Compton Gamma-ray Observatory in the 1990s possibly reveal other hybrid "long-short" bursts, but no follow-up observations are available to confirm this. Johan Fynbo of the Niels Bohr Institute in Copenhagen, also lead author on a Nature report, suggests that a burst from May of this year was also long, but had no associated supernova.

Image left: Gamma-ray bursts are common, yet random, and fleeting events that have mystified astronomers since their discovery in the late 1960s. Shorter bursts (less than two seconds in duration) are thought to be caused by mergers of binary systems with black holes or neutron stars. Click image to view animation Credit: NASA/Dana Berry, Skyworks Digital

Scientists remain divided on whether this was a long-short burst from a merger or a long burst from a star explosion with no supernova. Most conclude, however, that some new process must be at play – either the model of mergers creating second-long bursts needs a major overhaul, or the progenitor star from an explosion is intrinsically different from the kind that make supernovae.

Earlier hybrid bursts may have been detected by other telescopes. NASA’s orbiting Compton Gamma-Ray Observatory, for example, has data from the 1990s that hint at hybrids, but are insufficient to confirm them. At this point, Swift has the best instruments ever designed to study gamma-ray bursts. Dr. Johan Fynbo of the Niels Bohr Institute in Copenhagen suggests that a burst detected by Swift just nine days earlier may also have been a hybrid, though data on GRB 060605 is less complete.

Image right: NASA's Swift satellite successfully launched on November 20, 2004, from the Cape Canaveral Air Force Station, Fla. The satellite pinpoints the location of distant yet fleeting explosions that appear to signal the births of black holes. When a GRB occurs, the BAT will be the first of Swift's instruments to detect it. The BAT feeds the gamma ray burst's position to the Swift spacecraft's attitude control system so the spacecraft can slew bringing the GRB into the XRT and UVOT's fields-of-view. Click image to view animation Credit: NASA/Chris Meaney

But even good Swift data aren’t enough to answer the questions without more information. “We have lots of data on this, have dedicated lots of observation time, and we just can’t figure out what exploded or merged,” said Dr. Gehrels.

So scientists must lie in wait for the next hybrid burst, ready to pounce on any new clues as to what kind of stars could produce this energetic surprise.

Swift was launched in November 2004 as a NASA mission in partnership with the Italian Space Agency and the Particle Physics and Astronomy Research Council in England; it is managed by NASA GSFC. Penn State controls science and flight operations, and the Los Alamos National Laboratory provides gamma-ray imaging analysis.