Earth-Like Planets May Be Common in Known Planetary Systems
More than one-third of the giant planet systems recently detected outside our solar system may harbor Earth-like planets covered in deep global oceans that offer abundant potential for life, according to a new study by scientists associated with NASA's Astrobiology Institute. 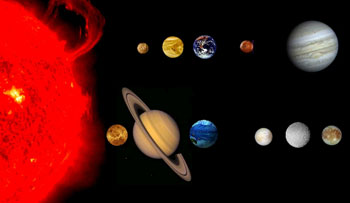 Image right: This image shows the differences (not to scale) between the inner regions of our Solar system, and a simulated planetary system containing a "hot Jupiter". The Solar system has four terrestrial planets: Mercury, Venus, Earth and Mars. Earth is in the habitable zone, where water can exist on its surface. The other planetary system contains a "hot Earth", a few times larger than the Earth but very close to the star, an ocean-covered planet in the habitable zone, and several icy planets in the outer system. Click to enlarge. Credit and copyright: Sean Raymond, 2006

The study focuses on planetary systems that contain "Hot Jupiters": gas giant planets that orbit extremely close to their parent stars -- even closer than Mercury to our own sun. Hot Jupiters are believed to have migrated inward toward their parent stars just as the planetary systems were forming, disrupting the space environment and triggering the formation of ocean-covered, Earth-like planets in a "habitable zone" conducive to the evolution of life, according to the new study.

Previous studies have indicated that as Hot Jupiters plowed through proto-planetary material on their inward migrations toward their parent stars, all the surrounding material would be vacuumed up or ejected from the system. "The new models indicate these early ideas were probably wrong," said co-author Sean Raymond of the University of Colorado, Boulder.

Published in the Sept. 8 issue of Science, the study indicates Hot Jupiters push and pull proto-planetary disk material during their journeys, flinging rocky debris outward where it is likely to coalesce into Earth-like planets. At the same time, turbulent forces from the surrounding dense gas slow the small, icy bodies in the outer reaches of the disk, causing them to spiral inward and deliver water to the fledgling planets. These planets may eventually host oceans several miles deep, according to the study. 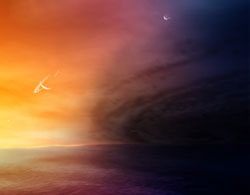 Image left: This image shows an artist's impression of what the surface of an ocean-covered planet in the habitable zone of a system with a "hot Jupiter" might look like. A "hot Earth" and the "hot Jupiter" are seen close to the setting sun. Massive waves and storms wash over the planet, a possible result of a lack of continents. Click image to enlarge. Credit and copyright: Nahks Tr'Ehnl, 2006

The research team ran exhaustive simulations lasting more than eight months each on more than a dozen desktop computers, starting from a disk of more than a thousand rocky and icy protoplanets about the size of the moon. The initial conditions for each computer model were based on current theories of how planets formed in our own solar system and simulated about 200 million years of planetary evolution.

The team concluded that approximately one out of three of the known planetary systems could have formed as-yet-undetected Earth-like planets in so-called habitable zones similar to the one in which Earth's orbit resides. "The fraction of known systems that could have the potential for life may be significantly higher than we had thought," said co-author Mandel Avi of Pennsylvania State University, University Park and NASA's Goddard Space Flight Center, Greenbelt, Md.

The new collaborative research effort may allow planet hunters to determine rough limits for where to search for habitable planets in known systems of giant planets. "We hope other researchers may be able to use our new model to narrow the list of potential targets in the search for other Earths", said co-author Steinn Sigurdsson of Pennsylvania State University.