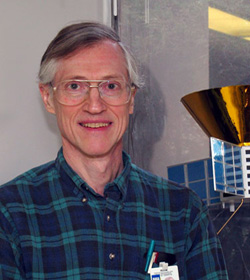 The 2006 Gruber Cosmology Prize has been awarded to John Mather and the Cosmic Background Explorer (COBE) science team for their groundbreaking studies confirming that our universe was born in a hot Big Bang.

A gold medal and $250,000 prize will be presented to Dr. Mather of NASA Goddard Space Flight Center in Greenbelt, Md., who will represent the COBE team at the opening ceremony of the International Astronomical Union’s General Assembly in Prague on August 15.

"The COBE mission was amazingly difficult but it worked beautifully, thanks to a brilliant team of scientists and engineers, and it changed cosmology forever," said Mather, who was COBE mission project scientist and now serves as Senior Project Scientist for the James Webb Space Telescope. "COBE succeeded beyond my wildest dreams. When we started in 1974, cosmology was very speculative. Now it's extremely quantitative, and we can answer questions that nobody had ever asked before."

The Cosmology Prize of the Peter Gruber Foundation recognizes individuals who have contributed to fundamental advances in the field of cosmology. The purpose of the Cosmology Prize is to acknowledge and encourage further exploration in a field that shapes the way we perceive and comprehend our universe.

COBE was built by NASA Goddard and launched in 1989 to measure microwave and infrared light from the early universe. COBE determined that the cosmic microwave background, which is essentially the afterglow of the Big Bang, has a temperature of 2.725 +/- 0.002 Kelvin, or about minus 455 degrees Fahrenheit. This observation matched the predictions of the hot Big Bang theory extraordinarily well and indicated that nearly all of the radiant energy of the universe was released within the first year after the Big Bang.

Also, COBE discovered slight temperature variations (about 10 parts per million) in this relatively uniform light. These variations---a little more heat here, a little less there---pointed to density differences which, through gravity over the course of billions of years, gave rise to the stars, galaxies and hierarchal structure we see today.

Steven Hawking, independent of the COBE team, called these variations "the most important discovery of the century, if not of all time."

The COBE mission ended in 1994 and carried three instruments: The Far Infrared Absolute Spectrophotometer (FIRAS) measured the temperature and spectrum of the cosmic microwave background. Mather was also the FIRAS Principal Investigator, and Richard Shafer of NASA Goddard was Deputy P.I. The Differential Microwave Radiometer (DMR) measured the temperature variations, called anisotropy. George Smoot of the University of California, Berkeley, was the DMR Principal Investigator, and Charles L. Bennett, then at Goddard and now at Johns Hopkins University, was the Deputy P.I.

The Diffuse Infrared Background Experiment (DIRBE) measured the cosmic infrared background, the "core sample" of the universe, containing the cumulative emissions of stars and galaxies dating back to the epoch of first light hundreds of millions of years after the Big Bang. The result was surprising: The universe has produced twice as much light as had been thought, and hidden it from view. A previously unknown population of galaxies made this light. Michael Hauser, then at Goddard and now at Space Telescope Science Institute in Baltimore, was the DIRBE Principal Investigator. Tom Kelsall of Goddard was the Deputy.

Along with the scientists mentioned above, the recipients include the other members of the COBE Science Working Group: Eli Dwek, S. Harvey Moseley, Robert F. Silverberg, and Nancy Boggess (retired) of NASA Goddard; Edward Cheng, formerly with Goddard and now president of Conceptual Analytics; Samuel Gulkis and Michael A. Janssen of the NASA Jet Propulsion Laboratory; Rainer Weiss of the Massachusetts Institute of Technology; Stephan Meyer of the University of Chicago; Philip Lubin of the University of California, Santa Barbara; Edward Wright of the University of California, Los Angeles; Thomas Murdock of Frontier Technology; and the estate of the late David T. Wilkinson of Princeton University.

The Peter Gruber Foundation was founded in 1993 and has established a record of charitable giving principally in the U.S. Virgin Islands, where it is located. The Foundation supports five international awards: Cosmology; Justice; Genetics, Neuroscience; and Women’s Rights. Since 2001, the Cosmology Prize has been co-sponsored by the International Astronomical Union.