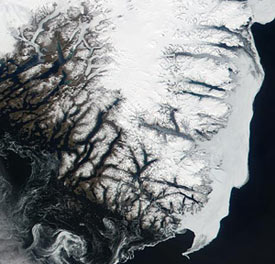 Using a novel technique that reveals regional changes in the weight of the massive ice sheet across the entire continent, scientists at NASA's Goddard Space Flight Center, Greenbelt, Md., report that Greenland's low coastal regions lost 155 gigatons (41 cubic miles) of ice per year between 2003 and 2005 from excess melting and icebergs, while the high-elevation interior gained 54 gigatons (14 cubic miles) annually from excess snowfall. The study appears in Science Express, the advance edition of Science, on Oct. 19.

"With this new analysis we observe dramatic ice mass losses concentrated in the low-elevation coastal regions, with nearly half of the loss coming from southeast Greenland," said lead author Scott Luthcke of NASA Goddard's Planetary Geodynamics Laboratory. "In the 1990's the ice was very close to balance with gains at about the same level as losses. That situation has now changed significantly, with an annual net loss of ice equal to nearly six years of average water flow from the Colorado River."

The study is based on an innovative use of data from the Gravity Recovery and Climate Experiment (GRACE) satellite that reveals detailed information about where and when the Greenland ice mass has changed. Other recent studies using GRACE observations have reported continent-wide ice mass declines, but none has shown these changes in enough detail for scientists to investigate how the change is distributed among the different areas of the ice sheet. 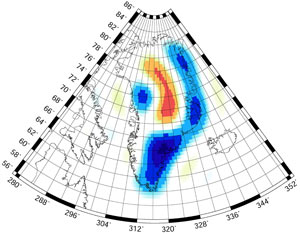 The authors divided Greenland into six "drainage systems" according to the directions that the ice sheet flows from the interior toward the coasts. The drainage systems were further divided into high- and low-elevation areas. The amount of ice in the two northernmost systems remained essentially unchanged from the start to the end of the 24-month study period (July 2003-July 2005). The largest ice mass loss occurred along the southeastern coast. Continued monitoring in the future is needed to determine whether this ice loss is a long-term trend, the authors point out.

To achieve this more-detailed view of the ice sheet's behavior, Luthcke and his colleagues used a technique that brings GRACE's global view of the Earth down to a more local and frequent view. The pair of GRACE satellites orbiting in close formation detect changes in the Earth's mass directly below them by measuring changes in the distance between the two satellites as the gravitational force of the mass causes each to speed up or slow down.

Standard GRACE data products infer local mass changes from a global data set of these satellite measurements. The new study used only data from over the Greenland region, which produced smaller-scale mass change readings over Greenland every 10 days. This allowed the Goddard scientists to monitor the ice sheet region by region and season by season and compare what they found to other known features of the ice sheet and its dynamic behavior. 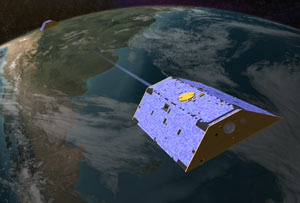 Image right: The changes in the ice sheet's mass were measured from space by the GRACE mission. GRACE is a pair of satellites orbiting in close formation that can detect changes in the Earth's mass directly below them by measuring changes in the distance between the two spacecraft as the gravitational force of the mass causes each to speed up or slow down. Click to view animation. Credit: NASA

"With this new detailed view of the Greenland ice sheet, we have come a long way toward resolving the differences among recent observations and what we know about how the ice sheet behaves," said co-author Waleed Abdalati, head of Goddard's Cryospheric Sciences Branch. "A consistent picture from the different data sets is emerging."

"The seasonal cycle of increased mass loss during the summer melt season and growth during winter is clearly captured," said co-author Jay Zwally, ICESat project scientist. The new results also capture more precisely where changes are taking place, showing that the losses of ice mass are occurring in the same three drainage systems where other studies have reported increased glacier flow and ice-quakes in outlet glaciers. The new results show a dramatic speed up in the rate of ice mass loss since the late 1990's that is nearly identical to reports earlier this year based on radar measurements of glacier acceleration.

Although the ice mass loss observed in the new study is less than half of what other recent research has reported, the results show that Greenland is now losing 20% more mass than it receives from new snowfall each year. "This is a very large change in a very short time," said Zwally. "In the 1990's, the ice sheet was growing inland and shrinking significantly at the edges, which is what climate models predicted as a result of global warming. Now the processes of mass loss are clearly beginning to dominate the inland growth, and we are only in the early stages of the climate warming predicted for this century."

NASA's ICESat laser satellite is currently acquiring even higher-resolution data on where the ice changes are taking place, which is providing more detail into the mechanisms that are causing the ice changes. The authors are also using ICESat data and the new GRACE technique to study individual drainage systems in Antarctica. GRACE is a joint partnership between NASA and the German Aerospace Center, Deutsches Zentrum für Luft und Raumfahrt. The satellites, launched in 2002, are managed by the Jet Propulsion Laboratory.