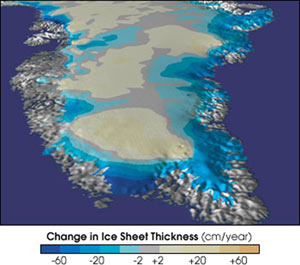 It's widely documented that climate change is causing the Greenland and Antarctic ice sheets to shrink. Air temperatures in many parts of the polar regions have increased and waters that surround parts of the ice sheets have warmed up. What most do not know is that until just six years ago, we had no real way of measuring whether the ice sheets were shrinking or growing, or at what rate.

Image right: NASA's ICESat measures changes in the thickness of ice sheets in Greenland and in Antarctica. This image is of glacial ice along Greenland’s shoreline, which is thinning rapidly—up to 60 cm per year—while the interior ice is thickening at a rate of only 10 cm per year. Credit: NASA

Today, advances in remote sensing, the use of highly sensitive instruments aboard satellites and aircraft, have enabled scientists to examine the mass balance of the ice sheets and to determine just where and how quickly the ice is growing or shrinking. Of particular importance is the mass balance of the ice sheet, which is the difference between how much ice it has lost versus gained over a period of time, and is a direct measure of an ice sheet's contribution to sea level rise.

With increases in the number of ways researchers can now measure changes in the landscape and rate of change of the ice sheets, have also come some variations in scientific results that some may find confusing. However, a closer look tells a fairly consistent story.

"The media has reported a lot about how ice is changing, particularly in Greenland, but the numbers vary depending on the time period examined and the technique used. As a result, there may be some confusion out there about what's really happening," said Waleed Abdalati, a glacier expert and head of the Cryospheric Sciences Branch at NASA's Goddard Space Flight Center, Greenbelt, Md. "We have all these techniques and some are giving different answers than others. But what's significant is that we have the ability to even debate ice sheet measurement results at all when we could not have a few years ago. Now, we're talking about how much ice sheet shrinkage there is and how rapidly it's taking place."

Researchers now use aircraft altimetry, satellite radar and laser altimetry, radar interferometry, gravity measurements from NASA's Gravity Recovery and Climate Experiment (GRACE) mission and precise elevation change measurements from NASA's Ice, Cloud, and Land Elevation (ICESat) satellite. Each tool has its own strengths, and when used together, these technologies produce a comprehensive look into the ice sheets' behavior that have changed the way the world thinks of climate change and its impact on ice sheets and glaciers. 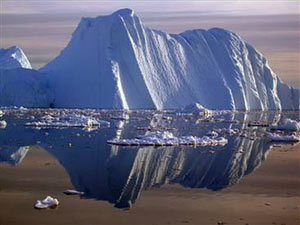 Each of these provides important information for unraveling the behavior of the ice sheets, and collectively they tell a story. In Greenland, they reveal an ice sheet that is shrinking dramatically at the edges and growing at its higher interior elevations, such that there is a net loss of ice that is far greater than it was in the last decade. These losses are a result of increased melting, and faster flow at the edges, as the floating ice that surrounds parts of Greenland and buttresses some of the outlet glaciers melts.

In Antarctica, these observations tell us that the West Antarctic ice sheet is currently shrinking substantially, and has been for the last decade. They also tell a story of a second much larger ice sheet in East Antarctica that has been growing slowly. The net result in Antarctica is that the ice sheet as a whole has been shrinking, contributing to rising sea levels, and probably much more so in recent years.

"We did not appreciate in the past how the changes in ice sheets respond so quickly to changes in climate. The story these measurement techniques are all telling is that the ice sheets are shrinking more than they were 10 years ago," said Abdalati. "The borders of the ice sheets are melting in waters that are warming."

"Of the techniques for measuring ice sheet change, the laser altimetry approach of the ICESat mission is the most effective because it provides a detailed look at the overall integrated changes in the ice sheets," offered Abdalati. "And continuous observations like those by ICESat would greatly enhance our ability to understand what's really happening to the Earth's dramatically changing ice cover. The most telling comprehensive picture, however, is created when all the techniques are used together."