NASA Diagnoses Tropical Storm Gert's Growth Spurt
Scientists want to know how a tropical cyclone develops from a weak tropical depression into a tropical storm. To answer that question, NASA and other scientists flew over and through storms in 2005 and obtained and combined data that let them see the storm in four dimensions. 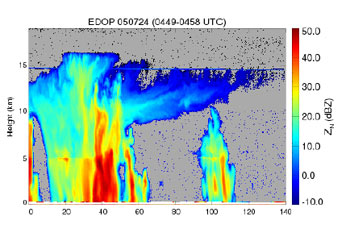 They found that a burst of rapidly rising air (convection), a weak wind shear (winds that vary with height that can blow a storm apart), and the ocean surface temperature all played an important role in Tropical Storm Gert’s origination and strengthening.

In July 2005, during the Tropical Cloud Systems and Processes (TCSP) mission field experiments, scientists from NASA, the National Oceanic and Atmospheric Administration (NOAA) and universities boarded hurricane research planes and flew over and into Tropical Storm Gert near eastern Mexico. From the aircraft they dropped sensors called "dropsondes" into the storm. They also observed Gert by satellite and ran computer models with the data they gathered from the dropsondes and satellites to re-create the storm inside and outside.

Zhaoxia Pu, assistant professor in the Department of Meteorology at the University of Utah, led the study. "By recreating the storm on a computer model as a four-dimensional structure -- height, width, depth and over time -- it will help us understand the mechanisms of storm development," Pu said.

Xuanli Li, a graduate student at University of Utah, and Pu conducted a study to identify the factors that affect the storm's development.

In addition to the dropsonde information, they used satellite data from NASA's QuikSCAT satellite for winds; the Tropical Rainfall Measuring Mission (TRMM) satellite data on precipitation; and the National Oceanic and Atmospheric Administration's Geostationary Operational Environmental Satellite (GOES) for movement of the atmosphere, into a computer model. Their purpose was to produce a very detailed view in both space and time of the evolution of tropical storm Gert throughout its life cycle. 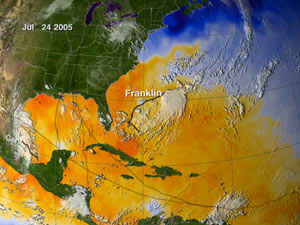 Tropical storms and hurricanes travel over large areas during their life cycle and are influenced by many factors. With the computer simulation of Gert, scientists are getting a much more detailed look at what may lead to those changes, whether it’s a change in air temperature or the direction or strength winds are blowing at different levels of the atmosphere.

"By combining the satellite and dropsonde data and creating high-resolution computer model simulations, we were able to reveal the major structural features as they evolved in Gert," said Li. "The computer simulation accurately captured the rapid increase in the upward motion of the air (convection) inside Gert when the storm strengthened from a tropical depression to a tropical storm." said Li.

"We expect that our understanding of tropical storm development will be improved through these types of comprehensive datasets obtained from field observations and high-resolution computer model analysis," said Edward Zipser, a co-author and lead scientist on NASA's African Monsoon Multidisciplinary Activities (NAMMA) 2006 Atlantic Ocean hurricane mission.

Gert began as a low pressure area that formed in the Gulf of Honduras just east of Chetumal, Mexico on July 22. The low quickly moved inland over Yucatan and organized into a tropical depression on July 23. The next day, the depression strengthened into Tropical Storm Gert. The computer model re-created Gert's life cycle from July 22 to July 25.