NASA Embarks On International Study Of Air Pollution Flowing Into U.S. From Abroad
In Mexico City, a team of researchers from NASA and other institutions have kicked off the first phase of one of the most complex field campaigns ever undertaken in atmospheric chemistry. Researchers will use data from research satellites, aircraft and ground-based instruments to investigate the transformation of air pollution as it flows downwind from Mexico City and learn more about impacts of air pollution on human health and climate. 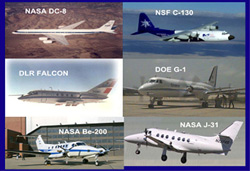 Image above right: The high-flying NASA DC-8 and DLR Falcon-20, and the low-flying NSF/NCAR C-130 aircrafts (seen below) will be used to provide comprehensive radiation, chemical, physical, and optical measurements involving gases and aerosols during the INTEX-B experiment. Click image to enlarge. Credit: NASA

From March 1 through May 15, NASA and its partners will carry out the Intercontinental Chemical Transport Experiment (INTEX-B). The experiment is the second of a broader two-phase NASA project to study the transport and evolution of gases and tiny particles, called aerosols, across continents and to assess their impact on regional air quality and climate. During INTEX-B, researchers will pursue the origins of pollution that ultimately finds its way to North America and affects air in the troposphere, the lower part of the atmosphere where we live and breathe.

As part of INTEX-B, NASA will participate in a field study today through March 29 called Megacity Impacts of Regional and Global Environments (MIRAGE), led by the National Center for Atmospheric Research (NCAR), Boulder, Colo. The results are expected to be applicable to the world's megacities, those with 10 million or more inhabitants. Other participants include the National Oceanic and Atmospheric Administration, the U.S. Department of Energy, several U.S. universities, and more than a dozen Mexican partners.

"There has been significant growth in the size and number of megacities like Mexico City, the second largest in the world with 18 million residents," said atmospheric chemist Hanwant Singh, lead mission scientist for INTEX-B at NASA's Ames Research Center, Moffett Field, Calif. "These cities generate atmospheric concentrations of pollutants that routinely exceed international standards. We must determine how this pollution from other regions affects our air quality. Ultimately, this is very much tied to human health."

Both high-flying NASA DC-8 and DLR Falcon-20 aircraft and low-flying aircraft like the National Science Foundation (NSF)/National Center for Atmospheric Research's (NCAR) C-130 and the U.S. Department Of Energy's (DOE) G-1, will be used to provide a comprehensive radiation, chemical, physical, and visual measurements of gases and aerosols. INTEX-B researchers will also closely coordinate their observations from planes with that of NASA satellites, especially Aura, Aqua, and Terra, as well as the European Envisat.

Image left: This image shows the export path of pollution from Mexico to the U.S. Click image to enlarge. Credit: NASA

"There is tremendous value in linking data from the 40 instruments aboard the DC-8 aircraft to that captured by our research satellites to get a comprehensive picture of the composition of the air transported to and from the U.S.," said Bruce Doddridge, director of the Tropospheric Chemistry Program at NASA Headquarters, Washington. "With the experience gained in comparing the aircraft and satellite measurements made during this campaign, we can more confidently apply our satellite measurements to studying air quality all over the world.”

"The world is urbanizing," said NCAR scientist Sasha Madronich, one of the principal investigators for MIRAGE. "If we can understand the pollution impacts of Mexico City, we can apply this new knowledge to other urban areas across the globe."

Last year's first phase of INTEX explored the makeup and transport of air from the U.S. to Europe. The second part of NASA's INTEX-B project will be completed in April when Asian pollution transport to North America is at its peak. The INTEX-B and MIRAGE field studies are components of a set of simultaneous field campaigns collectively called Megacity Initiative: Local and Global Research Observations (MILAGRO). For more detail on NASA's involvement in INTEX-B on the Web, visit: