NASA Data Captures El Niño's Return in the Pacific
NASA satellite data indicates El Niño has returned to the tropical Pacific Ocean, although in a relatively weak condition that may not persist and is currently much less intense than the last major El Niño episode in 1997-1998.

Image above: This image from the Advanced Microwave Scanning Radiometer (AMSR-E) aboard NASA’s Aqua spacecraft shows sea surface temperatures in the Pacific Ocean. The rectangular box on the right side of the image outlines the area closely monitored for El Niño development. Credit: JAXA/NASA/JPL

Over the past several weeks, NASA's Aqua and Jason satellites have observed a general warming of ocean temperatures and a rise in sea surface heights in the central and eastern Pacific along the equator, both indicators of El Niño development.

"The present conditions indicate that the intensity of this El Niño is too weak to have a major influence on current weather patterns," said Bill Patzert, oceanographer and climatologist at the NASA's Jet Propulsion Laboratory, Pasadena, Calif. "But, if the ocean waters continue to warm and spread eastward, this event would likely strengthen, perhaps bringing much-needed rainfall to the southwestern and southeastern United States this winter."

The National Oceanic and Atmospheric Administration, the lead U.S. agency on monitoring and forecasting these events, has also recently noted other signs of a developing El Niño, including below-normal rainfall in Indonesia, Malaysia and the Philippines. These areas are usually the first to respond to an El Niño pattern as trade winds relax due to higher-than-normal air pressure in the region. 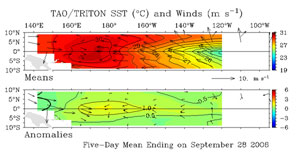 Still, scientists remain doubtful about whether the observed El Niño will persist. They say it is important to wait and see how ocean conditions evolve over the next couple of months since there are natural fluctuations that result in a short-term tendency toward warmer water on the Pacific equator at this time of year.

According to researchers, the current El Niño signal is far less dramatic than that seen during the start of the last major El Niño episode in 1997-1998. That event brought devastating floods to California that cost millions of dollars in damage while severe drought struck Indonesia, Australia and the Philippines.

El Niño is a cyclical warming of the ocean waters in the central and eastern tropical Pacific that generally occurs every 3 to 7 years. It is associated with changes in air pressure and the movement of high-level winds that can affect weather worldwide. Typically peaking during the winter months, El Niño is the warm phase of the El Niño/Southern Oscillation. It alternates with La Niña, the cooling of ocean waters in the same region of the Pacific. 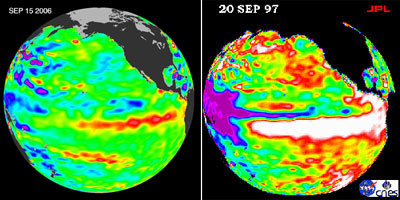 In the United States, El Niño normally results in warmer-than-normal temperatures across the northern and western states. Wetter conditions often prevail over much of the south with dry weather across the Ohio Valley and Pacific Northwest.

During the next several weeks and months, scientists at the National Oceanic and Atmospheric Administration and NASA will continue to closely monitor conditions in the Pacific to determine how the evolution of this El Niño may impact weather patterns this winter.