NASA to Fly Into Portal to the Stratosphere
NASA scientists are leading an airborne field experiment to a warm tropical locale to take a close look at a largely unexplored region of the chilly upper atmosphere. This area is critical to the recovery of the ozone layer and predicting future climate change. This very cold region far above the Earth's equator (54,000 feet), a few miles higher than commercial aircraft can fly, is the main pathway where the lower part of the atmosphere, known as the troposphere, flows into the stratosphere. 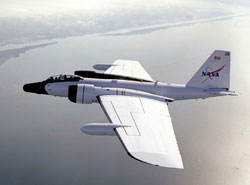 Image to right: From its base of operations in Costa Rica, NASA's high-altitude WB-57F aircraft is carrying 29 scientific instruments to study atmospheric chemistry and a rarely observed class of hard-to-see clouds that may play an important role in climate change. Credit: NASA

High-altitude flights by a NASA aircraft based in Costa Rica during the month-long field campaign are being choreographed with the orbits of Aura, NASA's latest Earth-observing spacecraft. Launched in 2004, Aura helps scientists understand how atmospheric composition affects and responds to Earth's changing climate. The satellite helps to reveal the processes that connect local and global air quality, and also tracks the extent the Earth's protective ozone layer is recovering.

In concert with global observations from Aura, the Costa Rica Aura Validation Experiment (CR-AVE) is tackling some of the remaining puzzles about how ozone-destroying chemicals get into the stratosphere and how high-altitude clouds affect the flow of one of the most powerful greenhouse gases -- water -- into this critical region. The project is an integrated science and satellite validation campaign sponsored by NASA’s Science Mission Directorate. Paul Newman, Goddard Space Flight Center, Greenbelt, Md., and Eric Jensen, Ames Research Center, Moffett Field, Calif., orchestrate the field activities as CR-AVE project scientists.

Image to left: Two of the scientific instruments being used during the mission are readied for flight at Johnson Space Center. Sunyoung Park and Bruce Daube of Harvard University look over a whole air sampler (far left) and Harvard's carbon dioxide instrument (center). Credit: NASA

NASA's WB-57F high-altitude aircraft is carrying a payload of 29 scientific instruments up to heights of 60,000 feet (17 kilometers). The Johnson Space Center aircraft will capture extensive, best-ever glimpses into this region's chemical brew, the ice crystals inside high-altitude clouds, and a rarely observed class of hard-to-see clouds that may play an important role in climate change. Flights began Jan. 14 from San Jose, Costa Rica, and continue through Feb. 9.

Costa Rica provides NASA scientists an ideal base of operations to sample this unique zone of the atmosphere. Usually Earth's two major atmospheric regions -- the troposphere and the stratosphere -- only rarely mix across a barrier called the tropopause. But near the equator there is a steady flow of air into the stratosphere. The tropopause is the portal through which chemicals and water from the lower atmosphere are pumped higher into the atmosphere.

There is a lot going on in this hard-to-reach region that scientists want to know more about. "The tropical tropopause layer is an important transition zone in the atmosphere, and we don't understand the physics of how it works well enough," says Goddard's Paul Newman. 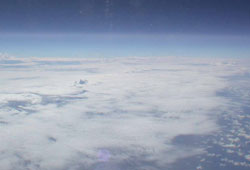 Image to right: Elusive "sub-visual cirrus" clouds are being hunted during the high-altitude CR-AVE mission flights. This edge-on view of a faint layer of these rarely sampled clouds (top) was captured on Jan. 14 by NASA pilots nearly 11 miles (17.4 kilometers) above the Caribbean Sea. Credit: NASA

Knowing in detail how the air moves and how fast it moves is an important gap in scientist's ability to predict when the ozone layer will recover, according to Newman. "For example, there is more bromine, a key chemical involved in ozone destruction, in the stratosphere than we estimate should be there, based on our knowledge of how this part of the atmosphere circulates. That's a problem we need to solve if we're going to improve our predictions."

Another major player in both ozone recovery and future climate change -- water -- will also be closely studied in this region during the campaign. The small amount of water that does manage to get into the stratosphere forms icy clouds over the poles, and ozone destruction is amplified by these clouds. Exactly how water gets into the stratosphere is still a major scientific question.

Water in the form of ice crystals in high-altitude clouds also influences how much heat the atmosphere keeps from sunlight. Huge anvil cirrus clouds can cover up to 20 percent of the tropics and play a large role in the Earth's overall heat balance. "But the size and shape of the ice crystals in these clouds have not been very well sampled, and if we don't know that, we can't estimate how much sunlight these clouds reflect," says Ames' Eric Jensen. The WB-57F will repeatedly fly through these clouds to gather this information, which is much sought-after by scientists using computer models to estimate global climate change.

The NASA aircraft will also be hunting for an elusive type of cloud called "sub-visual cirrus" that forms near the very cold tropical tropopause, much higher than typical cirrus clouds. "These clouds are so high that they have rarely been sampled, and we don't know very much about how they form," says Jensen. The cloud layers are so thin that they can only be seen edge-on, so it will be up to the aircraft flight crew to spot them during their flights.

Image above: NASA scientists, pilots, and mission planners are joined by researchers from the National Oceanographic and Atmospheric Administration and several U.S. universities in the month-long field campaign. CR-AVE participants are shown here during test flights at Johnson Space Center. Credit: NASA

Measurements from the NASA aircraft will also prove critical to the scientific value of the Aura satellite. By comparing readings from instruments on the aircraft to those on Aura, scientists can be certain that Aura's data is as accurate as possible. NASA satellites provide a wealth of global observations every day that are essential to tackling many scientific questions.

"Science is a game of numbers," says Newman, "and your numbers get more accurate if you can compare readings from two independent instruments. This 'validation' of the Aura measurements is critical to NASA's mission to obtain high-quality observations of the Earth to advance science."

Also participating in the experiment are scientists from the National Oceanographic and Atmospheric Administration's Earth System Research Laboratory, Harvard University, the National Center for Atmospheric Research, the University of Wisconsin, and the University of Denver. The Costa Rican National Center of High Technology (CENAT) is providing high-altitude weather balloon observations and weather forecasting support.