Hubble Maps the Cosmic Web of 'Clumpy' Dark Matter in 3-D
An international team of astronomers using NASA’s Hubble Space Telescope has created the first three-dimensional map of the large-scale distribution of dark matter in the universe. 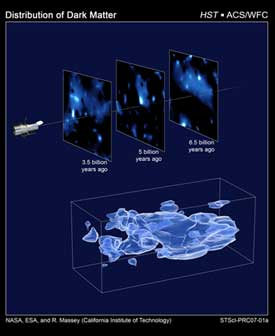 Image right: The top "sliced" image shows how dark matter evolved from 6.5 billion to 3.5 billion years ago. Dark Matter is an invisible form of matter that accounts for most of the universe’s mass. The bottom image shows dark matter "clumping" together over time confirming theories of how structure formed in our evolving universe. Click image to enlarge. + High resolution Credit: NASA, ESA, CalTech

Dark matter is an invisible form of matter whose total mass in the universe is roughly five times that of “normal” matter (i.e., atoms). It can be thought of as the scaffolding of the universe. The visible matter we see collects inside this scaffolding in the form of stars and galaxies. The first direct detection of dark matter was made this past year through observations of the Bullet Cluster of galaxies.

The new map provides the best evidence yet that normal matter, including all stars and galaxies, collect within the densest concentrations of dark matter.

Mapping dark matter’s distribution in space and time is fundamental to understanding how galaxies grew and clustered over billions of years.

The map stretches halfway back in time to the beginning of the universe, and reveals a network of dark matter filaments, collapsing under the relentless pull of gravity and growing clumpier over time. 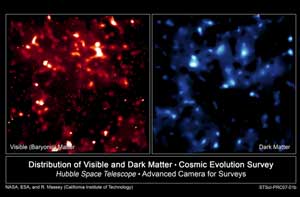 Image left: These two false-color images compare the distribution of normal matter (red, left) with dark matter (blue, right) in the universe. The brightness of clumps corresponds to the density of mass. The comparison will provide insight on how structure formed in the evolving universe under the relentless pull of gravity. Click image to enlarge. + High resolution Credit: NASA, ESA, CalTech

This is consistent with conventional theories of how structure formed in our evolving universe, which has transitioned from a smooth distribution of matter at the time of the Big Bang.

The researchers used data from Hubble Space Telescope’s largest survey to date of the universe, the Cosmic Evolution Survey (“COSMOS”). The COSMOS field covers a sufficiently wide area of sky – eight times the area of the full Moon – for the large-scale filamentary structure of dark matter to be clearly evident. To add 3-D distance information, the Hubble observations were combined with data from Europe’s Very Large Telescope in Chile, Japan’s Subaru Telescope in Hawaii, the U.S.’s Very Large Array radio telescope in New Mexico, as well as the European Space Agency’s orbiting XMM-Newton X-ray Observatory.

The dark matter map was constructed by measuring the shapes of half a million faraway galaxies.

To reach Hubble, their light has had to travel through intervening dark matter, and the path of the light is slightly deflected by the dark matter’s gravity. The observed, subtle distortion of the galaxies’ shapes was used to reconstruct the distribution of intervening mass along Hubble’s line of sight – a method called weak gravitational lensing.

For astronomers, the challenge of mapping the universe has been similar to mapping a city from nighttime aerial snapshots showing only streetlights. Dark matter is invisible, so only the galaxies can be seen directly.

This new map is equivalent to seeing a city for the first time during the day, where the major arteries and intersections of the asphalt roadways become evident, and a variety of neighborhoods are revealed. Because the survey looks back in time the deeper it looks into the universe, it is also like a time-lapse view of the growth of a city over decades.