NASA Experiment May Have Found Trigger For Radio-Busting Bubbles
NASA-funded researchers have identified a possible cause of giant bubbles that often form above the equator in the electrically charged upper atmosphere.

These bubbles, manifestations of a phenomenon called "Equatorial Spread-F", disrupt radio signals that must pass through the atmosphere, including those for satellite communications, navigation systems, and the global positioning system (GPS). "We believe we have found a new process that triggers the formation of these bubbles. Our discovery could lead to improved forecasts of this phenomenon because we now know what to look for," said David Hysell of Cornell University, Ithaca, N.Y., the experiment Principal Investigator. The results are described in a series of papers; one published in the December 2005 issue of Geophysical Research Letters, and another in the May 2006 issue of Annales Geophysicae. A third paper has been submitted to the Journal of Geophysical Research.

The researchers traveled to Kwajalein Atoll in the Marshall Islands near the equator in the Pacific Ocean to conduct their experiment during August 3 to 15, 2004. A radar facility operated by the U.S. Department of Defense provided the big picture with large-scale observations of the electrified upper atmosphere (ionosphere). The team, supported by NASA engineering staff, launched two salvos of instrumented sounding rockets (three each on two different nights) into this region, and obtained detailed measurements of the wind speed and direction, the density, and the electric fields in a cross-section of the ionosphere. When the team fed the radar and rocket observations into a computer simulation, the results supported a theory the team had developed to explain how the bubbles form. 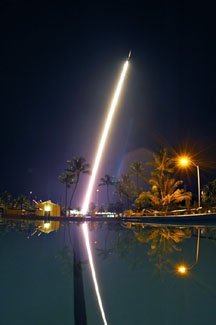 Image right: The first in a series of three sounding rockets designed to study the formation of equatorial Spread-F is launched from the island of Roi-Namur in the Kwajalein Atoll. Credit: Kerry Young

Wind shears are common and well-known in the lower atmosphere, where they pose hazards to airplanes. A similar but more complicated phenomenon appears to operate in the upper atmosphere leading to the production of these giant bubbles that mushroom to great heights above the equator, analogous to the large cumulo-nimbus clouds of everyday experience in the lower atmosphere. The rocket scientists discovered a shear flow just below the region in the ionosphere where the bubbles form. The ionosphere above the equator can flow in a westward direction at one altitude while just above, the ionosphere flows in an eastward direction due to forcing by prevailing neutral winds. The shear set up by these oppositely directed flows is unstable and the flows begin to ripple, producing waves in the ionosphere that are the seeds that grow into the enormous Equatorial Spread-F bubbles. This scenario is fully supported by the Kwajalein experiments. "Our theory predicts that the shear flow will most often form waves with wavelengths (distance between wave crests or troughs) of either 30 km (18.6 miles) or 200 km (124.3 miles) in the ionosphere above the shear region. This is in fact what we saw; one night, 30 km waves were present, and another night, 200 km waves formed," said Hysell.

Image below: From left to right, Altair radar scans depicting ionospheric conditions before, during, and after the flight of the instrumented sounding rocket. Images are in false color, with orange/red representing high-density electrically charged gas (plasma), and blue representing low-density plasma. The white arc in the center image traces the rocket trajectory. Note the waves in the center image transforming into Spread-F plumes in the right image. Credit: David Hysell

The idea that bubbles in the ionosphere could be responsible for radio communication disruptions was developed in the mid-1970s, but until now, none of the theories proposed to explain the bubble formation have been conclusively demonstrated to work. On any given day, there is about a 50 percent chance the bubbles will form. They appear about 400 km (almost 250 miles) above Earth where the electrically charged gas (plasma) in the ionosphere is densest. Within tens of minutes, they form towering plumes reaching altitudes of up to 2,000 km (nearly 1,250 miles), with widths from tens to hundreds of km (miles).

They usually appear at night, when the ionosphere becomes unstable because a layer of dense plasma forms on top of low-density plasma. The layers can't mix easily because they are pinned in place by the Earth's magnetic field, which is horizontal and directed northward over the equator. However, when conditions are right, bubbles of low-density plasma penetrate the dense plasma layer and rise high above Earth. The bubbles allow the two layers to mix, making the ionosphere stable again, but some trigger is necessary for the bubbles to form. The team's experiment supports the idea that the shear flow is the trigger.

The researchers will test their theory further with the Communications and Navigation Outage Forecast System, a U.S. Air Force satellite projected to be launched in 2008. "Sounding rocket experiments are a good way to do this kind of science, because they are modest experiments that give an initial test of your theory, allowing you to refine your ideas and focus your efforts before the much more expensive satellite is launched," said Hysell.

The team includes Hysell, Miguel Larsen at Clemson University, Clemson, S.C., Charles Swenson at Utah State University, Logan, Utah, and Timothy Wheeler at Penn State University, University Park. Additionally, Erhan Kudeki of the University of Illinois, Urbana-Champaign, has collaborated with Hysell on the basic idea and will continue to help develop the theory.