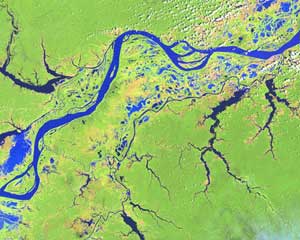 A team of scientists, led by Greg Asner of the Carnegie Institution’s Department of Global Ecology, Washington, found that 16% of rain forests, which had been selectively logged, were completely clear-cut within one year and 32% of logged areas were completely cleared within four years. Virtually all of this double damage occurs within 15 miles (25 km) miles of major roads. Practically no selective logging takes place at distances greater than 15 miles from the roads.

The results, published in a recent on-line edition of The Proceedings of the National Academy of Sciences, come on the heels of recent Brazilian legislation to regulate logging for better sustainability and the announcement by the Brazilian National Space Research Institute (INPE) to develop a remote sensing system to monitor logging in collaboration with the Brazilian non-governmental organization, IMAZON. The on-going work of the Carnegie-led team could bolster the long-term timber management goals and monitoring efforts of the government.

The scientists used their novel high-resolution, remote-sensing techniques to measure logging and combined that information with the deforestation maps that Brazil makes publicly available through the INPE PRODES program. “We surveyed an area that is about three times the size of Texas from 1999 to 2004,” explained Asner.

Diane Wickland, Manager, Terrestrial Ecology Program at NASA Headquarters, Washington, hailed this study as “a compelling demonstration of how satellite data can be used to provide quantitative information over large regions -- regions too large to measure effectively in any other way.” The researchers used the Landsat 7 Enhanced Thematic Mapper-Plus (+ETM) satellite to identify and quantify the extent of logging. The Landsat Program is a series of Earth-observing satellite missions jointly managed by NASA and the U.S. Geological Survey.

They also used land-cover data from NASA's Earth Observing-1 (EO-1) satellite. The National Aeronautics and Space Administration EO-1 satellite was launched on November 21, 2000 as part of a one-year technology validation/demonstration mission. Since November 2001, United States Geological Survey has managed the EO-1 Program as an Extended Mission. 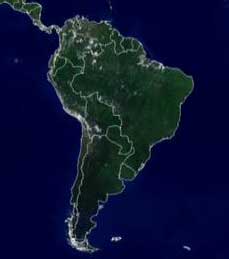 Image/movie to left: Throughout much of the 1980s, deforestation in Brazil eliminated more than 15,000 square kilometers (9000 square miles) per year. That pace has only increased through the 90s and into the 21st century. Data gathered over time by several in the Landsat series of spacecraft shows enormous tracts of forest disappearing in Rondonia, Brazil in images from 1975, 1986, 1992, and 2001. New roads open territory to potential deforestation by expanding into new areas. Clearing of vegetation along the sides of those roads tends to fan out to create a pattern resembling a fish skeleton. Click on image to view movie. Credit: NASA/SVS

“The link between selective logging and clear-cutting is a one-two punch. Once a forest is selectively logged, it is likely on the path to destruction,” said Asner. The researchers were surprised by such a tight relationship between the two land-use activities because different groups are involved—loggers versus ranchers and farmers—and those actors are treated differently by government regulators.

The remote sensing system has a spatial resolution of 98 feet by 98 feet. Through advanced computational methods, the scientists can determine the level of canopy damage and how long it takes to grow back, which they use to understand the severity and duration of ecological disruption. Foliage cover regulates such processes as the rate of photosynthesis, water balance, plant and animal population dynamics, and most critically, the probability of drought and fire.

The research depended on state-of-the-art digital deforestation maps provided by INPE for comparing deforested areas to logged forest. “The Brazilian PRODES program, a global gold-standard for deforestation monitoring, made our comparison possible,” explained co-author Michael Keller of the U.S. Forest Service. “And INPE’s planned development of a logging monitoring system promises to improve government control of the frontier.”

Daniel Nepstad, of The Woods Hole Research Center, noted that “Asner's group puts to rest another important controversy in the science of the Amazon rain forest. First they showed that forest degradation by loggers affects as much forest as clear-cutting for cattle ranching and swidden agriculture. This latest article demonstrates that these two processes are intimately linked—that the thinning begets forest replacement by cattle pastures and swiddens.”

Overall, the researchers found that selective-logging operations in the Brazilian Amazon were conducted using highly damaging techniques. Encouragingly though, they also found that federally regulated preserves were much less disturbed than unprotected forests.

“This breakthrough has created a novel system to detect and quantify even fine-scale logging damage from satellite images across the vast Amazon,” commented Lisa Curran of the Yale School of Forestry & Environmental Studies. “Through their analyses, Asner’s team uncovered unforeseen synergies of logging, road access, and subsequent deforestation. Their innovative methods have the potential to revolutionize how we monitor logging damage and its effects on land-use worldwide.”

Looking to the future Asner observed, “The new Brazilian timber concession laws for federally protected lands could bring more control over both the high levels of forest damage caused by current logging operations and the loss of selectively logged forest to full deforestation.”