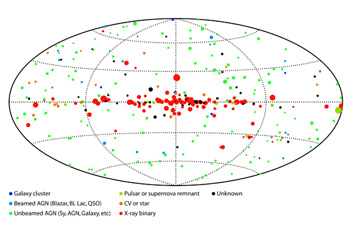 Image right: This all-sky map contains all active supermassive black holes out to a distance of 400 million light years from Earth. This is an unbiased survey, and scientists are convinced that no active black hole (called AGN, for Active Galactic Nucleus) has gone uncounted. Shown here are all high-energy X-ray sources, which includes many star systems within our galaxy which are not part of the Swift black hole survey. The AGN are the light blue and green dots, largely "high" in the sky above and below the galactic plane. Click image to enlarge. + Click for high resolution Credit: NASA/Swift/BAT/Markwardt et al.

The all-sky survey contains more than 200 supermassive black holes called Active Galactic Nuclei, or AGN, and provides a definitive census of black hole activity in the local universe. The team uncovered many new black holes that were previously missed, even in well-studied galaxies, and other surprises as well.

"We are confident that we are seeing every active, supermassive black hole within 400 million light years of Earth," said Jack Tueller of NASA’s Goddard Space Flight Center, Greenbelt, Md., who led the effort. "With each passing month, we are able to probe deeper into the universe, and the census becomes richer." 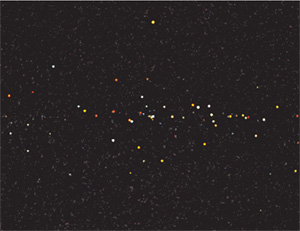 Image left: Shown here are higher-energy X-ray objects in or near our galaxy. The sources are largely stellar-mass black holes, neutron stars, pulsars and supernova remnants. The colors depict X-ray energy in which red is lower energy and blue is the highest; white is an even mix of lower-energy and higher-energy X-ray photons. These sources are not included in the Swift satellite census of active, supermassive black holes. Those sources are far beyond our galaxy, detectable but too distant for Swift to image. Credit: NASA/Swift/BAT/Markwardt et al.

AGN have a mass of millions to billions of suns, which are confined within a region about the size of our solar system. The term "active" refers to the process of actively pulling in gas and whole stars and generating copious amounts of energy from a tiny galactic core in the process. Examples include quasars and Seyfert galaxies.

Swift was built primarily to study gamma-ray bursts. During waiting times between bursts, Swift's Burst Alert Telescope, which is sensitive to the highest-energy X-rays, scans the sky. AGN generate X-rays as well as many other forms of light. Many AGN, however, are hidden behind dust and gas, which block lower-energy light, such as visible light. Because higher-energy X-rays are so penetrating, Swift can detect AGN missed by other surveys, allowing for an unbiased count. 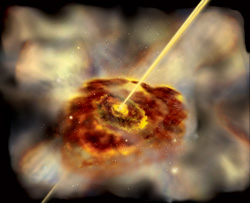 Nearly every massive galaxy seems to have a supermassive black hole, but only a few percent appear to be active. Our galaxy's central black hole is dormant, and this and similar black holes are not included in the Swift census. All black holes were likely once active, and why some remain active and others are dormant in the modern, local universe is a mystery.

"You can't understand the universe without understanding black holes," said Richard Mushotzky of Goddard, a census team leader. "Perhaps as much as 20 percent of all of the radiated energy in the universe---most X-rays, large fractions of ultraviolet and infrared light, and a good deal of radio waves---arise in one way or another from AGN activity."

One key census finding is the discovery of AGN in starburst galaxies, which are bright from star formation. These dust-enshrouded AGN, uncovered by Swift, will enable a detailed test of the idea that black hole activity and star formation go hand in glove, feeding each other. Swift also sees hints of cocooned black holes, so embedded in dust that they are completely invisible except in the higher-energy X-ray band.

The initial census results, from data collected in 2005, are a "first taste of things to come," Tueller said. Each scan of the sky is stacked atop existing scans, equivalent to a long camera exposure, so black holes from deeper in the universe will eventually be detected. 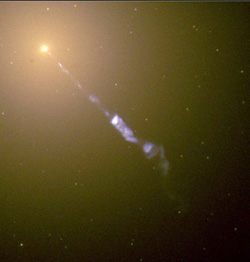 Image left: Many black holes, notorious for pulling matter in, somehow generate particle jets shooting matter away at nearly light speed. Data from the Swift satellite may have solved the mystery of the nature of these jets. Data suggest they are made of electrons and protons."Click image to enlarge. Credit: NASA and the Hubble Heritage Team

Swift builds upon two other surveys. The European INTEGRAL satellite completed a high-energy X-ray survey earlier in 2006, although this focused on the galactic plane and not the whole sky. NASA's Chandra X-ray Observatory conducted a lower-energy X-ray survey of a small fraction of the sky, providing a sample of the more-luminous black holes that formed in the early universe.

"The Swift black hole catalogue can be used in a thousand ways," said Craig Markwardt of Goddard and the University of Maryland, who combined the nine-month Swift data into all-sky images. "It's hard to believe the whole sky is peppered with black holes. You need powerful X-ray vision like Swift's to see them."