Hot Dust and Moisture Collide to Fuel Asian Summer Rainy Season
Who would think that something like dust in the air could trigger rain? According to a new NASA study, this is just what's happening over South Asia's Tibetan Plateau. Very small dust particles called aerosols blow in from desert regions and collect in the atmosphere over the plateau's slopes early in the region's monsoon season, helping trigger rainfall. 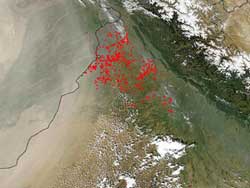 Image right: Dust and smoke from fires (red points) over northwestern India/Pakistan may contribute to a change in rainfall patterns over the region. Click image to enlarge. Credit: NASA

A monsoon is a seasonal shift in wind direction that alternately brings very wet and then very dry seasons to India and much of Southeast Asia.

William Lau, research scientist at NASA's Goddard Space Flight Center, Greenbelt, Md. and his team studied the aerosols using computer models. They found aerosols in the form of dust lofted from the desert surface and transported to the monsoon region can heat the air by absorbing the sun's radiation, altering the Asian monsoon water cycle. Black carbon particles from industrial emissions, bio-fuel burning and forest fires can add to this warming effect by absorbing the sun's radiation and heating the air currents transporting those aerosols. In some instances, black carbon coats the dust amplifying the heating effect because black carbon absorbs solar radiation more efficiently than dust. Rains from this annual weather cycle are a lifeline to over 60 percent of the world's population. Up to now, scientists have understood very little about how aerosols interact with the atmosphere to influence monsoons.

Lau's computer simulations indicate both of these light-absorbing and heat emitting aerosols, when mixed together with warm air currents and moisture, cause a heating effect in the air, triggering the rainy season earlier than usual and lengthening the wet monsoon season in Asia. The study was published the May 2006 issue of Climate Dynamics. 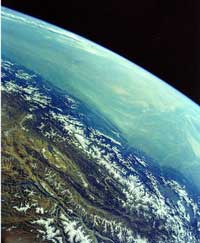 "Traditionally, aerosols have been seen as only a local environmental problem. Until very recently, aerosols have not been viewed as an intervening presence in the atmosphere that could affect monsoon rains," said Lau. "This study is the first to link dust aerosols to monsoon rainfall changes and to claim a specific physical mechanism in the atmosphere, whereby the tiny dust particles interact with the monsoon heat and moisture."

The mechanism operates like an "elevated heat pump," according to Lau.

Increased dust aerosols blowing in from western China, Afghanistan, Pakistan and the Middle East coupled with black carbon emissions from northern India accumulate in the pre-monsoon late spring in the atmosphere over the northern and southern slopes of the Tibetan Plateau. When the dust absorbs the sun's radiation, it heats the surface air hovering above the mountainous slopes of the region. The heated air rises and draws warm, moist air in to northern India from the Indian Ocean, which helps create more rainfall. As the air warms and moves upward, new air is drawn in to take its place, which is also warmed - creating a process like a pump that pulls heated air upwards.

The rising motion associated with the "elevated heat pump” effect far above the ground will shift the monsoon's path toward the foothills of the Himalayas, meaning that more rain will fall earlier in the season (in May) in northern India as a result, and less over the Indian Ocean to the south. The intensified heat and rain may cause increased mountain glacier melt, leading to more erosion in Nepal and near the Ganges River.

"An improved understanding of the effects of aerosols on the monsoon seasonal cycle benefits both science and society," said Lau. "Understanding the relationship between aerosols and the cycle of rainfall has a potential impact on water resources all over the globe."

Lau and colleagues from Kongju National University in Gongju, Korea, and Science Systems and Applications, Inc. of Lanham, Md., included the occurrence of these light-absorbing and heat-emitting dust and black carbon aerosols in their computer simulation with wind, moisture, and rainfall to see how they would interact. "We've looked at the evolution of monsoons over a 10-year period. We're definitely seeing something new through this model," commented Lau. 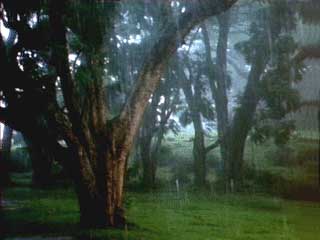 Image/movie right: "What is a monsoon?" -- This movie gives a brief look and explanation of what a monsoon is and how it works. Click image to view movie. Credit: NASA Data Assimilation Office

According to Lau, most studies of monsoons are done first by way of observations. In this case, because of the lack of long-term aerosol information and the complicated nature of the monsoon climate system, the researchers concentrated on computer modeling first. They now plan to confirm their findings with observations from satellites and from NASA's Aerosol Robotic Network, more commonly known as AERONET, a global network of ground-level aerosol sensors. AERONET instruments will be deployed in Nepal for this research.

Lau's research team is currently examining the aerosol effect on rainfall over South America and West Africa, where they are also finding that the “elevated heat pump” mechanism seems to be at work.