Converging Satellites Unlock Hurricane Lili's Sudden Demise
Using a fleet of NASA and other satellites as well as aircraft and other observations, scientists were able to unlock the secret of Hurricane Lili's unexpected, rapid weakening as she churned toward a Louisiana landfall in 2002. The data from multiple satellites enabled researchers to see dry air move into the storm’s low levels, partially explaining why Lili weakened rapidly. 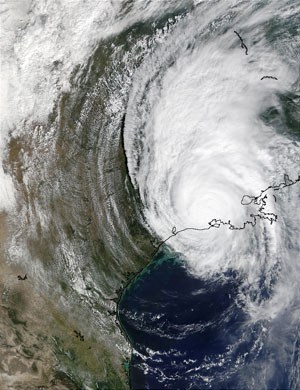 Image to right: Hurricane Lili was a Category 1 hurricane, and was centered over Louisiana on Oct. 3, 2002. This image was taken by the Moderate Imaging Spectroradiometer (MODIS) instrument, aboard NASA's Terra satellite. At this time, Lili had sustained winds of 92 mph near the center. On October 4, Lili was absorbed by an extratropical low while moving northeastward near the Tennessee/Arkansas border. Click image to enlarge. Credit NASA/GSFC/ MODIS Rapid Response

This study focuses on the rapid weakening of Hurricane Lili over the Gulf of Mexico beginning early on Oct. 3, 2002. During this time span, Hurricane Lili rapidly weakened from a category 4 to a category 1 storm, with its maximum sustained winds decreasing by 45 knots (51.8 mph) in the 13-hour period, until she made landfall in Louisiana. Operational computer models failed to predict this rapid weakening, which is not well-understood.

The study is being presented at the 86th Annual Meeting of the American Meteorological Society in Atlanta, Ga., during the week of Jan. 30. It was conducted by researchers from Mississippi State University (MSU), Mississippi State, Miss., and the National Center for Atmospheric Research (NCAR), Boulder, Colo.

"Because a polar-orbiting satellite can only obtain regional observations once per day, the ability to combine observations from multiple satellites over the data-sparse ocean is a key to understanding tropical cyclone intensity change," says Dr. Pat Fitzpatrick, the principal investigator from MSU. 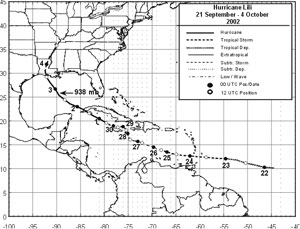 All of these different components were fed into an NCAR computer model called MM5 that re-creates atmospheric and oceanic conditions in four dimensions (height, width, area and time). The data was combined using a "Four-Dimensional Variational Analysis" (4DVAR) system. The MM5 computer model and 4DVAR system, developed by NCAR scientists, essentially re-created the conditions when Hurricane Lili weakened, so scientists could better understand the cause of the drop in strength. The model showed that low-level drier air, not observed in the conventional data, moved into the west side of Lili, at 00 Universal Time on Thursday, Oct. 3, 2002, (Wednesday, Oct. 2, at 8:00 p.m. ET), partially explaining the storm’s weakening. 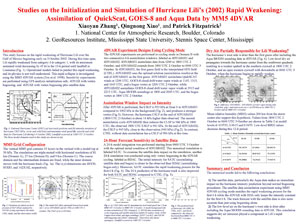 Image to right: AMS Poster: Hurricane Lili -- This poster, "Studies on the Initialization and Simulation of Hurricane Lili's (2002) Rapid Weakening" will be presented at the American Meteorological Society's Annual meeting, the week of January 29, 2006. Click on image to enlarge. Credit: NCAR/MSU

That dry air created an "open eyewall" which is basically a break up in the powerful thunderstorms that circle the open air center (eye) of the hurricane. Once the eyewall starts to break down, the storm weakens quickly.

The computer model also showed that the GOES upper-level wind data and QuikSCAT satellite wind information can improve hurricane track forecasts. "These satellites, through the 4DVAR technique, improved the inner-core wind structure and also defined the steering currents better," Fitzpatrick said. When this additional wind data from those two satellites was input, the computer model was also able to better re-create Hurricane Lili's track at landfall.

A paper on this subject has been submitted for review to Monthly Weather Review on the 4DVAR experiments, titled "The Impact of Multi-satellite Data on the Initialization and Simulation of Hurricane Lili's (2002) Rapid Weakening Phase." The scientists involved in this project are Xiaoyan Zhang and Qingnong Xiao, of the NCAR; and Pat Fitzpatrick, Nam Tran, Yee Lau, Sachin Bhates, and Valentine Anantharaj of MSU.