Growth in Amazon Cropland May Impact Climate and Deforestation Patterns
Scientists using NASA satellite data have found that clearing for mechanized cropland has recently become a significant force in Brazilian Amazon deforestation. This change in land use may alter the region's climate and the land's ability to absorb carbon dioxide. 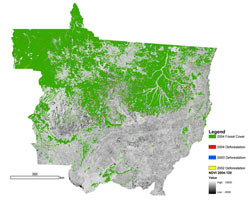 Image right: Deforestation in Mato Grosso, Brazil, as seen by the Moderate Resolution Imaging Spectroradiometer (MODIS) on NASA’s Terra and Aqua satellites. Areas still forested in 2004 are green. Deforested areas are labeled in different colors: 2004 deforestation is red, 2003 is blue, and 2002 is yellow. Areas that appear in gray scale are either not part of the Amazon forest ecosystem or were deforested before the time period covered by the analysis. Click image to enlarge Credit: NASA/Douglas Morton, University of Maryland-College Park

A study published online in the September 14, 2006 edition of the Proceedings of the National Academy of Sciences examined cropland expansion in Mato Grosso, the Brazilian state with the highest deforestation and soybean production rates. Using data from NASA's Moderate Resolution Imaging Spectroradiometer (MODIS) on the Terra and Aqua satellites and information from field observations, researchers found that in 2003, the peak year of deforestation, more than 20 percent of the state’s forests were converted to cropland. This finding suggests that the recent cropland expansion in the region is contributing to further deforestation.

The high resolution and daily frequency of MODIS images allows researchers to distinguish vegetation types in greater detail than other satellites. This capability has helped the scientists to see for the first time that the size of the clearings used for crops has averaged twice the size of clearings used for pasture. Land conversion has also occurred rapidly, with about 90 percent of new crops planted within a year of deforestation. 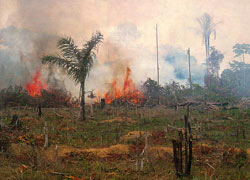 "Deforestation for cropland usually involves clearing several square kilometers of land and results in greater separation of remnant patches of forest than other types of land use," said study lead author Douglas Morton, University of Maryland, College Park, Md. "MODIS data is especially helpful in monitoring these changes because its two daytime observations provide much better data than other satellites over typically cloudy regions like the Amazon basin to help distinguish different land cover types."

In addition to mapping the change in land use type over Mato Grosso between 2001 and 2004, the researchers compared these changes with shifts in agricultural prices in the region. The study found a strong correlation between the amount of land deforested and the average annual soybean price. As soybean prices rose in 2003, the conversion from forest to cropland increased, while the amount of land converted to pasture declined. 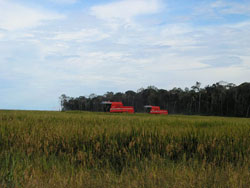 "In 2005, soybean prices fell by more than 25 percent and some areas of Mato Grosso showed a decrease in large deforestation events, although the central agricultural zone continued to clear forests," said Morton. "But, deforestation rates could return to the high levels seen in 2003 as soybean and other crop prices begin to rebound in international markets." Brazil has become a leading worldwide producer of grains including soybean, accounting for more than one-third of the country's gross national product. This new driver of forest loss suggests that the rise and fall of prices for other crops, beef and timber may also have a significant impact on future land use in the region, according to the study.

Converting forests to cropland also has a more pronounced ecological and climate impact than other land conversions because it involves the complete removal of land biomass, including tree trunks, stumps and woody roots. "The carbon once contained in the living material and soil is released into the air from multiple fires during the clearing process, causing atmospheric carbon dioxide concentrations, a primary greenhouse gas, to increase," said co-author Ruth DeFries, University of Maryland. Of all land uses and types, croplands are also one of the least efficient at absorbing carbon from the air.

In a related study, to be published in Earth Interactions, researchers found that the region's climate is impacted not only by the overall extent of clearing, but also by the type of subsequent land use. Changes in land cover and use directly influence climate by affecting the amount of solar energy absorbed at the surface, the transfer and flow of heat, and the transport of water from the land and plants through evaporation, a cooling process. 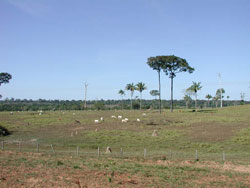 Using a computer climate model driven by MODIS data, the researchers examined the sensitivities of climate to recent changes in Mato Grosso. Model results indicate that areas converted from tropical forest to cropland, including soybean, result in warmer, drier conditions. But the conversion of forest into pasture - land with grasses - results in a cooling effect.

Tropical forests generally keep temperatures cooler because they transpire water through their leaves and roots. As a result, forests can maintain the regional climate more readily than croplands, even during the dry season.

"We found areas deforested and left with bare ground had the most profound impact on climate, raising temperatures up to 3 degrees Fahrenheit," said study co-author Lahouari Bounoua, NASA Goddard Space Flight Center, Greenbelt, Md. "Forests replaced with croplands had the second most significant climate impact, followed next by pastures."

These findings suggest that recent land conversions of the Amazon forest may have measurable effects on the regional climate. 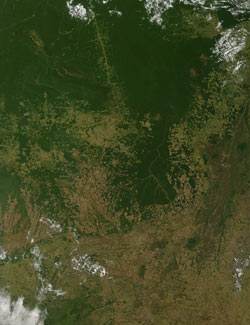 It is important for scientists to understand climate change in the region because the tropics receive two-thirds of the world’s rainfall. When it rains, water changes from liquid to vapor and back again, storing and releasing heat in the process. With so much rainfall, a large amount of heat is released into the atmosphere—fueling large-scale atmospheric circulations that transport heat and influence weather patterns both regionally and globally.

Deforestation remains Brazil's largest source of carbon dioxide emissions. These studies identify the evolution of individual land clearings over time to help grasp the fate of land use following deforestation. "This research provides the information needed for programs to reduce deforestation, projections of future deforestation, and efforts to identify priority areas for conservation," said Morton.

Both research studies were supported by the Large Scale Biosphere-Atmosphere Experiment in the Amazon, an international research effort led by the Brazilian Ministry of Science and Technology and sponsored by NASA’s Terrestrial Ecology and Land Use-Land Cover Change Programs. The project aims to understand how Amazonia functions as a regional entity within the larger Earth system, and how changes in land use and climate will affect the biological, physical, and chemical functioning of the region’s ecosystem.