Volcanic Blast Location Influences Climate Reaction
When a volcano erupts, it does more than just create an ash cloud that darkens and cools a region for a few days. Instead, the most dramatic effect is actually high above us, where spewed volcanic material is not quickly washed out by rain. 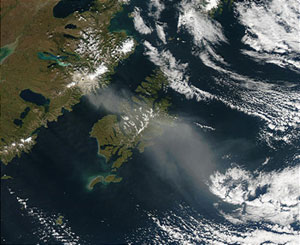 If the volcanic eruption is strong enough it will inject material into the stratosphere, more than 10 miles above the Earth's surface. Here, tiny particles called aerosols form when the volcano's sulfur dioxide combines with water vapor. Despite their size, these aerosols work to alter interactions between the atmosphere and sun, affecting climate patterns.

Now, new research funded by NASA and the National Science Foundation, focusing on the eruption of Mount Katmai, Alaska, in June 1912, shows that location is also important, as major volcanic eruptions far north of the equator affect the world's climate much differently than volcanoes in the tropics. 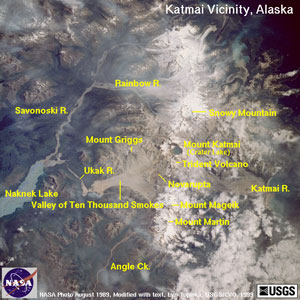 The Mount Katmai eruption was the one of the largest in the world during the 20th century. It actually refers to the eruption of Katmai and the larger explosion of Novarupta, just west, that spewed tons of sulfur dioxide gas into the atmosphere. Novarupta also released an incredible amount of molten rock (magma) that drained under Katmai causing its summit to collapse, forming a massive crater (caldera). The ash fall from the eruption covered an area of more than 3,000 square miles to a depth of a foot or more, while its ash cloud, carried by winds high in the atmosphere, spread a haze as far away as Africa.

"Studying such events will help us be better prepared for the next major eruption while giving scientists clues on the type of climate shifts and changes to expect," said Luke Oman, a researcher at Rutgers University's Department of Environmental Sciences, New Brunswick, N.J., and lead author of the study that appeared in the July 2005 issue of the Journal of Geophysical Research-Atmospheres.

By using one of the most modern General Circulation computer climate Models (GCMs) at NASA's Goddard Institute for Space Studies (GISS), New York, N.Y., the researchers studied the Mount Katmai volcanic eruption. They made a computer simulation of Katmai's eruption and an eruption three times as large to study their climate impacts.

Unlike earlier studies on volcanic eruptions in the tropics, this research did not show a change in an important climate pattern called the "Arctic Oscillation" (AO) following the Mount Katmai eruption.

AO is a climate pattern defined by winds circulating counterclockwise around the Arctic at about 55 degrees north latitude (about even with Moscow). The air can spin more slowly and spill cold air down toward the equator into the mid-latitudes, or it can spin faster and keep the cold up north.

"Large tropical volcanic eruptions tend to spread aerosols around the globe, but with high-latitude eruptions like Katmai, they remain north of 30°N latitude, where they are heated less efficiently by outgoing, or longwave radiation," said Oman. "As a result, the lower stratosphere does not warm enough to influence the AO."

Eruptions in the tropics, like Mount Pinatubo in 1991, create aerosols that block heat from the sun in the lower atmosphere, or troposphere, cooling temperatures in the subtropics. In turn, the reduced north to south temperature gradient results in a "positive" phase of the AO, with generally warmer winters over the Northern Hemisphere. 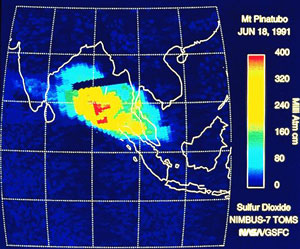 Image to left: This image produced by data from the Nimbus-7 satellite, shows the amount of atmospheric sulfur dioxide (blue is low, red is high) following the eruption of Mount Pinatubo in 1991. Credit: NASA GSFC

"In our research, although the Mount Katmai eruption was found to have some role in the winter climate, including distinct cooling in southern Asia, the most significant climate effect was during the summer when strong cooling over the Northern Hemisphere landmasses caused a decrease in the Asian monsoon circulation," said Oman.

Normally, northern India experiences large amounts of cloudiness and rain due to the summer monsoon, the seasonal shift in winds that develops out of the temperature contrast between the Indian Ocean and Asia. But, the eruption worked to lessen this gradient, weakening the monsoon, bringing reduced cloudiness, warmer temperatures and less precipitation across northern India west into the Persian Gulf. 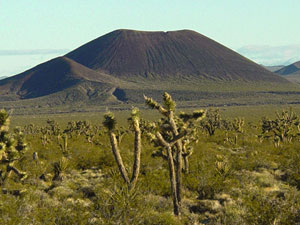 Image to right: A nearly perfect volcanic cone built entirely of loose fragmented material in Mojave National Preserve, California. Eruptions in this volcanic field occurred over the last several million years and in some cases lava flowed on the surface up to six miles from the eruption site. Credit: USGS

"This study not only offers further evidence that the location and intensity of an eruption largely determine the Earth's overall climatic response, it also helps us see how well our computer models perform," said co-author Gavin Schmidt of NASA GISS.

To verify our knowledge about the effects of volcanoes, researchers often investigate historic intense eruptions that brought major climate swings, like the Laki, Iceland eruption of 1783 that dimmed and reddened the sun while resulting in a very warm summer in Europe and one of the coldest winters on record for the Northeast United States and Europe in 1783-1784. Using a variety of techniques, including the measurement of acid fallout over polar areas from ice cores and analyzing annual growth rings in trees, researchers can confirm first hand the impact of such ancient eruptions.