Predicting Floods Using NASA's TRMM Satellite
A huge thunderstorm is headed your way. The ground is saturated from previous rains. A flash flood is likely. If you are in a flood zone, it would be nice to know these things before the flood waters arrive at your doorstep. 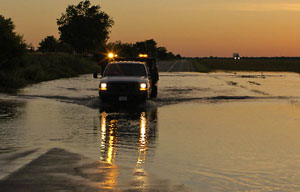 Image to right: To predict a flash flood, forecasters need to know both how much rain is falling and how much moisture the ground already contains. Credit: FEMA/Marvin Nauman

That warning may someday come from space, according to scientists using observations from NASA's Tropical Rainfall Measuring Mission (TRMM) satellite. TRMM is giving scientists clues about how much moisture is already in the soil, a key factor in how likely it is a flood will occur.

For floods to form two things need to happen: heavy rain must fall and the ground must stop soaking that rain up. Once the ground is saturated, it acts like a swimming pool and collects water in basins, or acts like a concrete drainage ditch, channeling it downhill. Flash floods result when heavy rains collect rapidly on wet ground and careen downhill.

Knowing early enough that a flash flood could occur, in time to get out of the way, can mean the difference between life and death. To provide warning, agencies like the National Weather Service use weather and soil data to decide when conditions suggest a flood could occur.

To predict a flash flood, forecasters need to know how much rain is falling and how much moisture the ground already contains. If the soil is already saturated from previous rains, a heavy storm could mean trouble and a warning can be issued to people in flood-prone areas.

Unfortunately, predicting rain and figuring out the amount of moisture in the soil isn’t easy. “It can be difficult to do, especially in the summer,” said Wade Crow, a researcher at the USDA Agricultural Research Service in Beltsville, Md. Crow's specialty is improving the measurement of soil moisture. 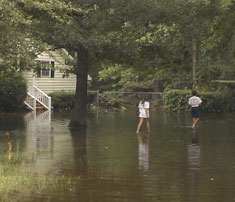 Image to left: If the ground is saturated, it acts like a swimming pool and collects water in basins, which can careen downhill in a flash flood. Satellite measurements of soil moisture would aid flood prediction. Credit: FEMA/Marvin Nauman

Forecasters currently determine soil moisture by tracking recent rainfall in a region. This is usually done by monitoring rainfall gauges, a method that works well but only in areas where gauges have been deployed.

“Rain gauge systems are expensive and difficult to maintain,” Crow said. “In reality we only have good rainfall data for very limited portions of the globe.”

To remedy that limited coverage, Crow decided to explore the use of observations from NASA's TRMM satellite to measure soil moisture directly. He and his fellow researchers may have found a way to determine soil moisture over much larger areas than those currently monitored by rain gauges.

The researchers use data from one of TRMM's instruments in an unorthodox way. Their method is based on observing the microwave radiation emitted by the soil. Although invisible to the human eye, this long-wavelength radiation can be detected by a TRMM sensor that was originally designed to measure rainfall in the tropics. One of Crow's fellow researchers, Thomas Jackson, realized that it was also capable of capturing the type of radiation emitted by soils. 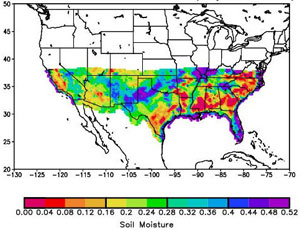 Image to right: Scientists are exploring the use of observations from NASA's TRMM satellite to measure soil moisture over large areas. This map shows their estimates of soil moisture on July 10, 1999. Credit: Rajat Bindlish (USDA/SSAI), Thomas Jackson (USDA)

Not only can the TRMM sensor observe changes in moisture levels, it can do it over a large geographic area. In a recent experiment, Crow’s team used satellite observations of soil moisture for large portions of the Southern Great Plains to predict how much water would runoff into streams after a thunderstorm.

These predictions were then compared to reliable measurements of how much water entered streams and rivers after rainstorms during those years. The scientists found that the measurements of soil moisture helped them forecast runoff in the region with more accuracy. Their results were published in the journal Geophysical Research Letters in September 2005.

So will satellites help warn people of flash floods in the future? “It’s still a big question,” Crow said. But based on the results of his experiment he is optimistic.

In the future, NASA plans to launch a satellite outfitted with a sensor specifically designed to measure fine differences in soil moisture, which Crow hopes will make space-based flood prediction a reality.