Stay Tuned for a STEREO View of Stormy Space Weather
The thrills! The chills! Soon you'll be able to see for the first time ever, in dazzling three dimensions … the Sun. Imagine solar prominences looping out into space for thousands of miles. Now picture a billion megaton blast of solar plasma flying toward Earth and the effect it would have on astronauts, satellites in orbit, airplanes, and power grids, which are vulnerable to such a burst. Now you're starting to see why we need a better understanding of that powerful and dynamic star. 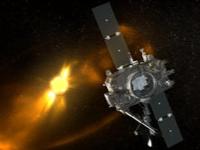 The upcoming Solar TErrestrial RElations Observatory (STEREO) mission will help provide the big picture by using two nearly identical spacecraft to image the Sun and track its activity in high definition 3-D. Particularly crucial will be its observations of coronal mass ejections, or CMEs, the most powerful explosions in the solar system. Related to solar flares (scientists still don't really know which comes first), CMEs can pack the force of a billion megaton nuclear bombs.

"In terms of space weather forecasting, we're where weather forecasters were in the 1950s. They didn't see hurricanes until the rain clouds were right above them; in our case, we can see storms leaving the Sun but we have to make guesses and use models to figure out if and when it will impact Earth," said Dr. Michael Kaiser, Project Scientist for STEREO at NASA Goddard Space Flight Center. 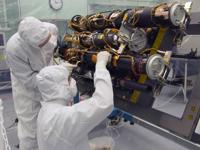 There's a strong fleet of satellites observing the Sun right now, but even with missions like SOHO, which images the Sun every 10 to 15 minutes, scientists still can't definitively say if a CME is coming toward Earth or traveling away from it -- for that we need to see the third dimension.

"When you're trying to figure out what really makes a CME go, knowing where it is in space is crucial. At this point we don't quite know where it is, how fast it's traveling, or how one structure interacts with another," said Dr. Terry Kucera, Deputy Project Scientist for the mission. 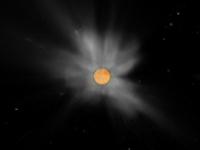 "If you only saw stuff with one eye you lose the ability to judge perspective and depth," said Dr. Alex Young, a NASA scientist. "Basically we're looking at the Sun with one eye. With STEREO, we're finally going to have the ability to gain this extra dimension, or this depth perception we didn't have before."

STEREO's spacecraft are just as unique and groundbreaking as its mission. It marks the first time that two spacecraft will launch on the same rocket, and then swing around the Moon to get into separate orbits. Once there, STEREO 'A' will fly ahead of the Earth and STEREO 'B' will fly behind it. When the solar arrays are deployed, the spacecraft will be about the length of a large school bus. 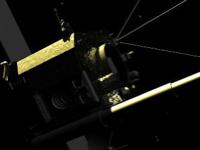 Image Left: Animated preview of STEREO spacecraft. The two spacecraft will be launched on the same spacecraft in Spring 2006. Click on image for animation or download higher resolution stills and movies. Credit: NASA/Chris Meaney

Building two spacecraft at the same time "requires twice the amount of knowledge, but isn't that much harder with the right team," said Jim Adams, the Deputy Project Manager.

Each STEREO observatory has a total of 16 instruments, all of which are still being assembled in labs throughout the world. In the summer they will all be brought to The Johns Hopkins Applied Physics Lab for assembly and initial testing, and then to NASA Goddard Space Flight Center for final testing. STEREO launches in February 2006 from the Cape Canaveral Air Force Station in Florida.

Besides improving space weather forecasting and understanding for Earth systems, STEREO is also an important key to understanding the Sun's influence throughout the solar system.

Image Left: This artist's concept shows a CME leaving the Sun and being buffeted by Earth's magnetic fields until it finally results in a spectacular aurora at the poles. Scientists still don't fully understand the origins and evolution of these massive storms. Credit: NASA/Walt Feimer.

Here on Earth we're protected by the atmosphere and magnetic fields from the Sun's radiation. But as NASA gears up to send astronauts to the Moon and beyond, we're going to need a better understanding of the dangerous solar particles accelerated by shock waves from CMEs. One of the biggest mysteries confronting scientists: why does one CME produce a major storm and another one does not?

"To some degree, we're getting knocked around and seeing bits and pieces. With STEREO, we'll get a chance to step back and see a CME from the outside in all its glory… We're not just going to see CMEs coming toward us, but we'll see how they move through the solar system," said Young.

And it's going to be one amazing show.